Dean Mervyn Jones AM (born 24 March 1961) is a retired Australian cricketer, and is presently a coach. He also worked as a media commentator.

Jones began his first class career in the 1981–82 season with Victoria in the Sheffield Shield. He made his Test debut for Australia in the West Indies in 1984. He was not picked in the original XI, but was drafted into the side after Steve Smith fell ill. Jones himself was very ill before the Test, and deemed his score of 48 on his debut as his "best knock".[1]

His most notable innings was in only his third Test, against India in the Tied Test in Chennai (Madras) in 1986. Suffering from dehydration in the oppressively hot and humid conditions, Jones was frequently vomiting on the pitch. He wanted to go off the field "retired ill" which led his captain Allan Border to say that if he could not handle the conditions, "then let's get a real Australian" (Greg Ritchie, a Queenslander like Border, was the next man in to bat). This comment spurred Jones to score 210, an innings he considered a defining moment in his career and one of the epic Test innings in Australian cricket folklore.[1]

Jones went on to be a mainstay of the Australian Test team middle order over the next six years and being one of the stars of the successful 1989 Ashes tour of England. He was controversially dropped from the test team at the start of the 1992–93 season, despite having topped the averages in the previous Test series, against Sri Lanka.[2] The decision dumbfounded many Australian cricket fans, given his reasonably good form at the time, and sparked calls from some in the media that his axing was due to a personal vendetta the then Australian coach Bob Simpson held against Jones.[citation needed] Other commentators suggested that Jones's penchant for publicly questioning the motives and decisions of the national team selectors brought a premature end to his Test career.[citation needed]

Jones stayed in the one-day team a little longer: he was omitted from the one-day team for the 1993 Ashes tour, but managed to force his way back into the team for one last stint during the 1993–94 season, before being dropped .

Jones was one of Australia's most successful batsmen in One Day International matches. In 164 matches he scored 6,068 runs, including seven centuries and 46 half centuries, at an average of 44.61. His strike rate of 72.56 may seem pedestrian now in the era of 300-plus scores in one-dayers and Twenty20 cricket, but it was a benchmark at the time. Jones played in the 1987 World Cup winning team, and was noted for his electric running between the wickets, outstanding out-fielding and aggressive batting especially against fast bowlers. With his positive, aggressive and flamboyant style of play he became a crowd favourite.

Jones also played for Durham and Derbyshire in the English County Championship. He left Derbyshire in mid-season and also had run-ins with authority and team mates in his home state of Victoria. During his career, he scored 19,188 runs in first class matches, including 55 centuries and 88 half centuries and a highest score of 324 not out, at an average of 51.85.

Jones is now a coach and a commentator. He is well-known for his condemnation of the bowling action of the Sri Lankan off-spinner Muttiah Muralitharan.[citation needed]

He is also a noted fundraiser for people with cancer. On 12 June 2006, in the Queen's Birthday Honours List, he was made a Member (AM) of the Order of Australia for "service to cricket as a player, coach and commentator, and to the community through fundraising activities for organisations assisting people with cancer".

He is also well known to enjoy being in the Indian subcontinent, particularly in India, and enjoys the region's culture and cuisine. Jones publicly expressed his disappointment at not being considered for selection as coach of the Indian cricket team in 2005; another former Australian batsman Greg Chappell was selected instead. At the time, Jones had repeatedly highlighted that he had visited India "27 times". As of November 2008, he has being stating on air that he has visited India "89 times". 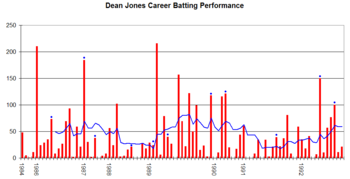 Jones' commentating contract with Ten Sports was terminated after referring to South African player Hashim Amla as a "terrorist" on 7 August 2006. When Amla, who is a Muslim with a full beard, took a catch, Jones was heard to say "the terrorist gets another wicket". Jones made the comment during a commercial break, but the comment went to air live in South Africa as its broadcast had not been interrupted. He has since apologised to all concerned.[3]

Jones wrote a series of blogs about the 2009 Ashes for Yahoo! sport, and joined the ICL commentary team in 2007–08.

In July 2010, Jones was stripped of his 2007 Father of the Year title after he admitted that he had a nine-year affair with a flight attendant, and fathered a son whom he had never seen.[4]

During Indian Premier League 2011, Jones commented that " RCA should lick Warne's feet". The association may initiate criminal proceedings against him. [5]