Mervyn Gregory Hughes (born 23 November 1961) is a former Australian cricketer. A right-arm fast bowler, he represented Australia between 1985 and 1994 in 53 Test matches, taking 212 wickets. He played 33 One Day Internationals, taking 38 wickets. He took a hat trick in a Test against the West Indies at the WACA in 1988–89 and went on to take 8-87. In 1993 he took 31 wickets in the Ashes Series against England. He was a useful lower-order batsman, scoring two half-centuries in tests and over 1000 runs in all. He also represented Victorian Bushrangers, Essex in English county cricket, Australian Capital Territory, Australia 'A' (in the World Series Cup), and Australia.

Hughes was born in Euroa, Victoria. He started kindergarten while at Apollo Bay, and his first year at school came when the family was back at Euroa. Organised sport began in 3rd grade at Werribee. He pestered his father to be allowed to join the 5th Grade at Werribee at football practice and was able to hold his own, despite the fact that he was one of the smallest players when out of his age group. Hughes' enthusiasm for sport was described as "unquenchable."[1]

Hughes started his career playing district cricket with Footscray in 1978–79. Footscray (now called Footscray-Edgewater) subsequently has had their main home ground named after him, it is now known as the Mervyn G. Hughes Oval. He was selected for Victoria in 1981–82 and made his debut against South Australia. Hughes first appeared for Australia against India in 1985–1986. He took 1-123 and was not re-selected until the Ashes Series against England the following year.

At Perth in 1988–89 Merv Hughes completed a hat trick spread across three separate overs and two different days. He had Curtly Ambrose caught behind with the last ball of his 36th over, ended West Indies' first innings in his 37th, by removing Patrick Patterson, and more than a day later completed his hat-trick by trapping Gordon Greenidge lbw with the first ball of West Indies' second innings.[2]

The Australian selectors always viewed Hughes as a Test match player rather than one-day player, and he was generally only selected for the shorter game when another player was injured or otherwise unavailable.[citation needed] Hughes played his last Test in Cape Town against South Africa in 1994.

Late in his career Hughes undertook a stint with the Canberra Comets which turned out to be unsuccessful. He claimed only five wickets at an average of 46.80 over six matches (Rodney Davison, Jimmy Maher, Jamie Cox, Shaun Young, and Ryan Campbell). 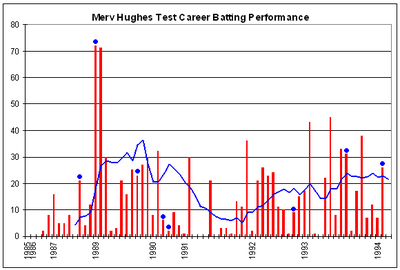 Hughes was a notorious consumer of alcohol and food. Towards the end of his career, this was felt to have increased damage to his knees and may have ultimately led to a shortening of his Australian and Victorian playing careers. Having always been rather overweight, he participated in both seasons of Channel Nine's Celebrity Overhaul to lose weight and improve his fitness. He was the top performer (weight-wise) in the first season of the show.

Hughes is noted for his large moustache. Described by Cricinfo as being "of incredible proportions",[3] the moustache became sufficiently synonymous with Hughes for him to insure it for £200,000.[4]

Hughes replaced Allan Border in June 2005 as a selector for the Australian cricket team, however, his performance as a selector has come under much scrutiny after many controversial decisions and the loss of the number one ranking for Tests after the 2009 Ashes series. However, Australia would go on and have a successful 2009–10 summer, finishing undefeated in all three forms of the game. Later, however, he would be dropped as a selector for the Australian Cricket Team. Hughes is a prominent supporter of the Western Bulldogs Australian Football League team. Hughes has also done some acting, portraying Ivan Milat in the comedy movie, Fat Pizza. He also appeared on TV commercials featuring losing weight with "The 14 day All Bran Challenge".

Hughes was replaced as selector by Greg Chappell on 29 October 2010.