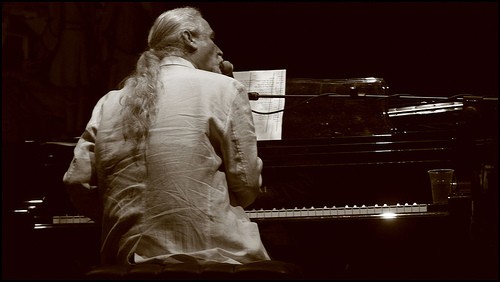 Shlomo Gronich grew up in a musical family in . He holds a B.A. in Music Education from Tel Aviv Educational Academy, and a B.A. in Composition from the Mannes School of Music, New York. He is married to Michal Adler, an internationally-acclaimed player.

Gronich composed more than a hundred classical compositions, many of which were performed by the world's most notable orchestras including the .

* 2001 Hadassah Award, for his work with the Sheba Choir

Gronich composed and arranged a unique Israeli-Palestinian peace and coexistence song, called in Hebrew Hevenu Shalom Aleinu (We brought peace upon us) and in Arabic Ma Ana Ajmal Min Salam (There is nothing more beautiful than peace). He gathered together a group of Jewish-Israeli and Palestinian singers and musicians to perform a beautiful, Middle-Eastern-style song, with a melody that combines , Arab pop, and Mizrahi musical elements (see ). The song was commissioned by the organization Peace Child Israel and adopted as its anthem. The lyrics alternate between and , culminating in the refrain which is sung simultaneously both in Hebrew and Arabic. In the arrangement of the song, Gronich included the traditional Arab instrument , and a traditional Jewish musical instrument - the .