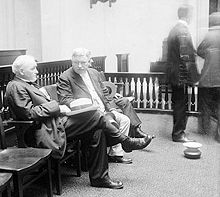 A Chicago courtroom scene, mid 1910s. A spittoon is seen on the floor at bottom right. 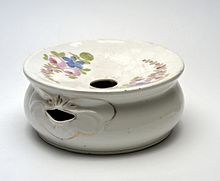 Decorated Surinam porcelain spittoon. Note this type of spittoon has a spout hole on the side for emptying.

A spittoon (or spitoon) is a receptacle made for spitting into, especially by users of chewing and dipping tobacco. It is also known as a cuspidor (which is the Portuguese word for "spitter" or "spittoon", from the verb "cuspir" meaning "to spit"), although that term is also used for a type of spitting sink used in dentistry.

"Spittoon" can also be slang American English for any receptacle (such as a tin can) used to hold spit, although the term "spitter" is more common.[citation needed]

The era of the common spittoon in the United States 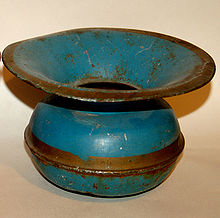 Brass was the most common material for spitoons. Other materials used for mass production of spittoons ranged from basic functional iron to elaborately crafted cut glass and fine porcelain. At higher class places like expensive hotels, spittoons could be elaborately decorated.

Spittoons are flat-bottomed, often weighted to minimize tipping over, and often with an interior "lip" to make spilling less likely if they tip. Some have lids, but most haven't. Some have holes, sometimes with a plug, to aid in draining and cleaning.

Use of spittoons was considered an advance of public manners and health, intended to replace previously common spitting on floors, streets, and sidewalks. Many places passed laws against spitting in public other than into a spittoon. 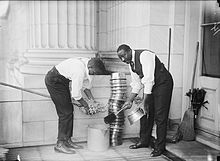 Janitors at the United States Capitol with stack of spittoons, 1914

Boy Scout troops organized campaigns to paint "Do not Spit on the Sidewalk" notices on city sidewalks. In 1909 in Cincinnati, Ohio, scout troupes together with members of the Anti-Tuberculosis League painted thousands of such messages in a single night. [1] A mass produced sign seen in saloons read:

Spittoons were also useful for people suffering from tuberculosis who would cough up phlegm. Public spittoons would sometimes contain a solution of an antiseptic such as carbolic acid with the aim of limiting transmission of disease. With the start of the 20th century medical doctors urged tuberculosis sufferers to use personal pocket spittoons instead of public ones; these were jars with tight lids which people could carry with them to spit into. Similar devices are still used by some with tuberculosis.

After the 1918 flu epidemic, both hygiene and etiquette advocates began to disparage public use of the spittoon, and use began to decline. Chewing gum replaced tobacco as the favorite chew of the younger generation. Cigarettes were considered more hygienic than spit-inducing chewing tobacco. While it was still not unusual to see spittoons in some public places in parts of the US as late as the 1930s, vast numbers of old brass spittoons met their ends in the scrap drives of World War II.

A large public collection of spittoons can be found at Duke Homestead State Historic Site, Durham, North Carolina. In 2008, the site's tobacco museum added 282 spittoons--claimed to be the world's largest collection--to its holdings of over 100.[2]

In China during the Qing Dynasty and later in Japan, a golden spittoon would be among the numerous objects displayed in front of the Emperor at major ceremonies.[3]

After China became a Communist state in 1949, the spittoon became much more prevalent: spittoons were placed at every conceivable public place, and were commonplace in homes as well. The mass introduction of spittoons was no doubt a public hygiene initiative, motivated by a desire to correct the once common Chinese practice of spitting onto the floor. The spittoons used in China were typically made of white porcelain, sometimes with traditional Chinese art painted onto the exterior.

Spittoons were used even during official functions by the political leaders of China; especially when Deng Xiaoping had a frequent use of spittoon with other political leaders. This eventually became a source of ridicule by the mass media outside China. As a response, the spittoons have largely been withdrawn from public spaces in China since the late 1980s. 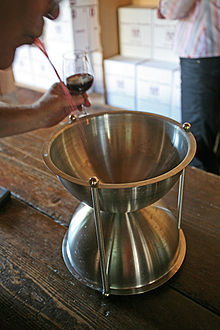 Spitting into a spittoon at a wine tasting.

While spittoons are still made, they are no longer commonly found in public places.

A rare profession which commonly uses spittoons is that of wine taster. A wine taster will sip samples of wine and then spit them into a spittoon in order to avoid alcohol intoxication. [4]

Each Justice on the United States Supreme Court has a spittoon next to his or her seat in the courtroom. The last time the spittoon was used for its customary purpose was in the early 20th century.[5]