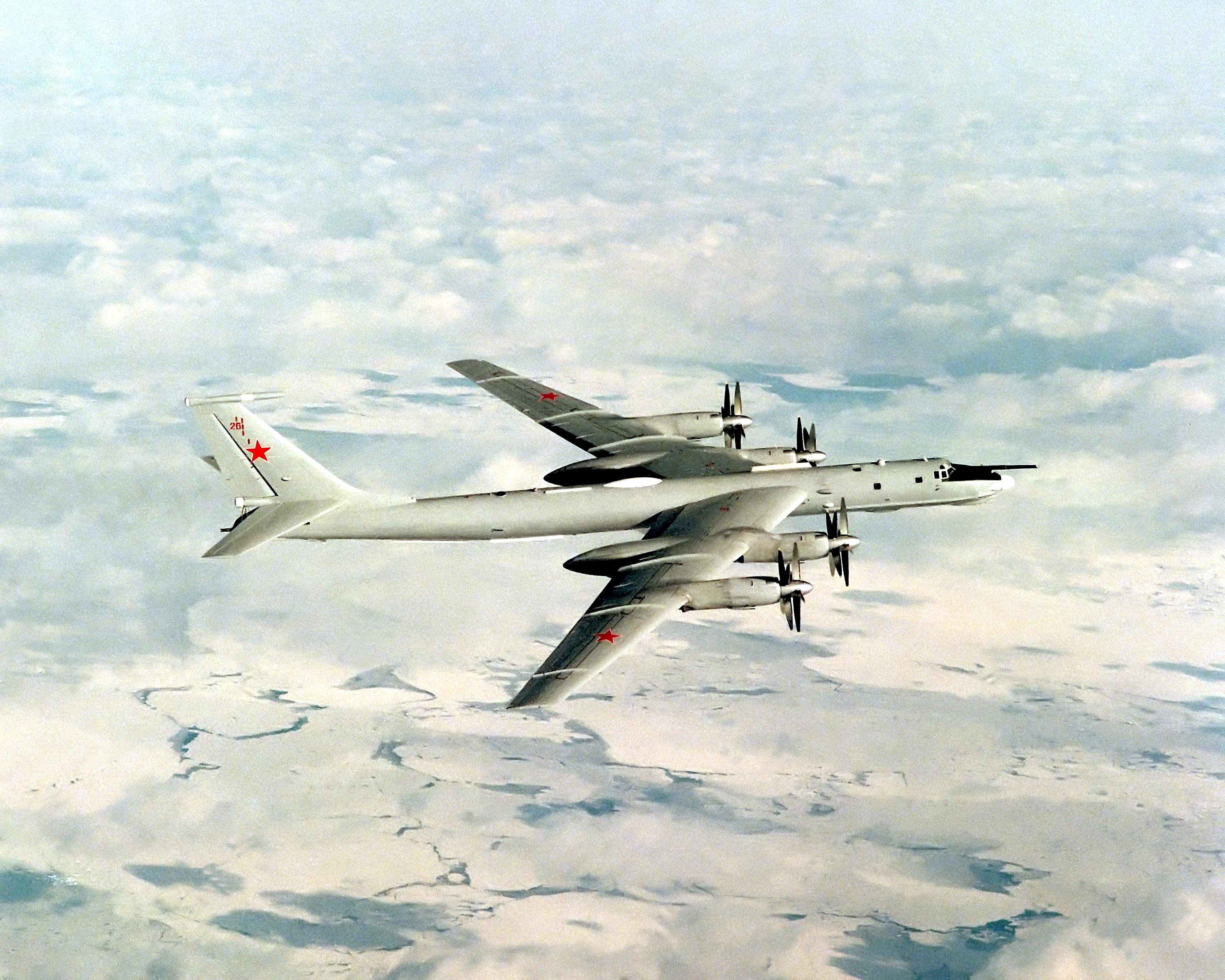 The Tu-95 ( _ru. Туполев Ту–95, : Bear) is the most successful and longest-serving Tupolev strategic and missile carrier built by the during the .

The Tu-95 is still in service, as of 2008, and is expected to remain in service with the Russian Air Force until at least 2040. [ [http://lenta.ru/articles/2007/07/19/tu95/ Lenta.ru: Оружие: Возвращение летающего медведя ] ] The Tu-95 is powered by four Kuznetsov NK-12 turboprop engines, each driving , and remains the fastest -driven aircraft to go into operational use. Its wings are swept back at 35 degrees, a very sharp angle by the standards of propeller-driven aircraft.

To date, it remains the only turboprop-powered strategic bomber to have entered operational service. A naval development of the bomber is designated Tu-142.

The design bureau led by designed the Soviet Union's first intercontinental bomber, the 1949 Tu-85, a scaled up version of the Tu-4, a copy. The Tu-85 was deemed to be inadequate against the new generation of American all-weather interceptors. A new requirement was issued to both Tupolev and Myasishchev design bureaus in 1950, it had to have an un-refuelled range of 8000km (4,970 miles), far enough to threaten key targets in the United States. Other goals included the ability to carry a 11000kg (24,250lb) load over the target. The big problem for Tupolev was the engine choice, the first generation jet engines had a large fuel consumption and turboprops gave a better range. Also in a parallel race to build an intercontinental bomber was , but the recently developed J57 enabled the to be jet-powered. The Myasischev bureau decided to use early jet engines. Tupolev decided to work on the problems with high-speed turboprops for the new bomber now designated the Tu-95.

With eight-bladed contra-rotating propellers the engine that emerged was the Kuznetsov NK-12 with a nominal 12,000 eshp (8948kW) power rating. Although the engine was advanced, the fuselage design was conventional: it was low-wing cantilever monoplane with 35 degrees of sweep. The angle ensured that the main wing spar passed though the fuselage in front of the bomb bay. It had a retractable tricycle landing gear, with the main gear retracting rearwards.The first aircraft flew in 1953.

Like its American counterpart, the , the Tu-95 has continued to operate in the Russian Air Force while several iterations of bomber design have come and gone. Part of the reason for this longevity was its suitability, like the B-52, for modification to different missions. Whereas the Tu-95 was originally intended to drop nuclear weapons, it was subsequently modified to perform a wide range of roles, such as the deployment of cruise missiles, maritime patrol (Tu-142), and even civilian airliner (Tu-114). An platform (Tu-126) was developed from the Tu-114. During and after the , the Tu-95's utility as a weapons platform has been eclipsed only by its usefulness as a diplomatic icon.

Development of the turboprop powered Tu-95 began in the 1950s as an intercontinental bomber when the Tu-4 showed that were not powerful enough to fulfill that role, and the AM-3 jet engines of the proposed T-4 intercontinental jet bomber did not provide it with enough range. [ [http://www.fas.org/nuke/guide/russia/bomber/tu-95.htm FAS.org - "Tu-95 BEAR (TUPOLEV)"] ]

The Tu-95 development was officially approved by the government on , resulting in the test of the first prototype 95/1 on . Series production of the airplane started in January 1956.

The Tu-95RT variant in particular was a veritable icon of the Cold War as it performed a vital maritime surveillance and targeting mission for other aircraft and surface ships and submarines. It was identifiable by a large bulge under the , which housed a radar antenna that was used to search for and target surface ships. The placed high priority in intercepting the Tu-95RT aircraft at least two hundred miles from air craft carriers with its interceptors, which would then escort the Tu-95. On occasion, USN Tomcats demonstrated an ability to intercept Tu-95RT aircraft at ranges up to 1,000 miles from the fighters' carrier battle group (Vistica, Gregory: "Fall From Glory").

During interceptions Tu-95 s typically kept their twin cannon pointed upwards as to not antagonize the intercepting fighters. Similarly, NATO rules of engagement for interceptions restricted aircrews from locking onto the Tu-95 with fire control radars lest this be misinterpreted as a hostile act.

During the height of the Cold War, the long range of the Tu-95 was demonstrated weekly as a pair of Tu-95s would fly from the to Cuba along the east coast of the United States, escorted continuously along the way.Fact|date=August 2007

Encounters in the air

Western fighters were — and are — often sent to intercept Tu-95s as they performed their missions along the periphery of airspace, often in very close formation.

Concerning the performance of the aircraft, it has been reported by many fighter pilots that the Tu-95 was able to out-accelerate them for a short distance, especially with the Fact|date=April 2007. There are also tales of the Soviet pilots suddenly swerving to push the escorts off course or cause them to rapidly decelerate. This went both ways, however. In the 1980s a F-16 collided with a Tu-95 while escorting it out of Norwegian airspace. Apparently, the Norwegian pilot had been edging closer and closer to the Tupolev before being caught in the prop wash and having a wingtip torn off in the resulting collision. Both planes landed safely.

As late as 1999, Russian Tu-95s, usually flying in pairs, have come within striking distance both of the Iceland/Greenland route of North Atlantic and Alaska/Bering Sea route of North Pacific. In June 1999, the Tu-95s, along with two s, turned back after being intercepted by U.S. fighters. A similar incident occurred in September but the Tu-95s turned back without making contact.

* — scrambled Canadian s from in Central and American F-15s out of an airbase in Alaska to intercept "a number of the Russian Tu-95 Bear heavy bombers participating in an annual Russian air force exercise near the coast of Alaska and Canada." This launch was a result of the bombers penetrating the North American Air Defense Identification Zone (ADIZ). [ [http://www.forces.gc.ca/site/newsroom/view_news_e.asp?id=2093 DND/CF | News Release | NORAD intercepts Russian aircraft ] ]

* May 2007 — the scrambled two Tornado fighters from in to intercept a Tu-95 observing the exercise . [ [http://www.dailymail.co.uk/pages/live/articles/news/news.html?in_article_id=453672&in_page_id=1770 Cold War reheated - RAF Tornados foil Russian spy in sky | the Daily Mail ] ]

* August 2007 — two Tu-95s flew towards the U.S. base on , where they were intercepted by U.S. fighter planes. Maj Gen Pavel Androsov of the Russian Air Force told a news conference, "We renewed the tradition when our young pilots flew by Guam in two planes. We exchanged smiles with our counterparts who flew up from a U.S. carrier and returned home." [ [http://news.bbc.co.uk/2/hi/europe/6938856.stm BBC NEWS | Europe | Russia sparks Cold War scramble ] ] [ [http://www.telegraph.co.uk/news/main.jhtml?xml=/news/2007/08/09/wrussia109.xml Russian bombers buzz US base in Guam - Telegraph ] ] However, the Pentagon denied that any aircraft were sent up, saying that the proximity of the bombers was not close enough to prompt a response from the carriers. [ [http://www.reuters.com/article/worldNews/idUSL1745006520070817?pageNumber=2 Putin revives Russia's long-haul bomber flights | International | Reuters ] ]

* — F-22A Raptors of the 90th fighter squadron performed their first intercept of two Russian Tu-95MS 'Bear-H' bombers in Alaska. This was the first time that F-22s had been called to support a NORAD mission. [ [http://dailyreport.afa.org/AFA/REPORTS/2007/Month12/Day14/1025raptor.htm "Raptors Perform First Intercept of Russian Bombers] ] [ [http://www.airshowbuzz.com/photos/browse.php?category=4 Pictures of F22/Tu95 intercept] ]

* — 24 aircraft including F-15 Eagles and an AWAC from the scrambled and gave "a notice, then a warning and another a notice and a warning," as a Russian Tu-95MS 'Bear-H' violated the country's airspace during a three-minute flyover of Sofugan in the . Japan formally issued a strong protest, demanded prevention of future incidents and presented a protest note to the Russian Embassy in Tokyo. Russian officials conversely stated that four Tupolev Tu-95 bombers completed a 10-hour mission over the Pacific on Saturday, but "our strategic aviation planes did not violate Japanese airspace." [ [http://www.foxnews.com/story/0,2933,330173,00.html Japan Deploys Fighter Jets After Russian Bomber Violates Airspace] ] [ [http://afp.google.com/article/ALeqM5jbPc204b-rVoFjSvZPlHVg6mKM8A Russian bomber cuts into Japanese airspace: official] ] [ [http://en.rian.ru/world/20080209/98817712.html Japan says Russian plane violated airspace, Russia denies] ]

* — in the Western Pacific, a Russian Tu-95 flew over the aircraft carrier twice, at a low altitude of about 2,000 feet, while another bomber circled about 58 miles out. Four American fighters from the carrier were scrambled and tracked the bombers. [ [http://www.breitbart.com/article.php?id=D8UODA4G0 Navy Intercepts Russian Bombers ] ] [ [http://abcnews.go.com/Politics/wireStory?id=4274279|ABC News|US Navy intercepts Russian bombers] ]

* — Off the eastern coast of , a Russian Tu-95 or Tu-142 flew over and was intercepted by two F/A-18 Hornets at an altitude of 2,000 feet at a distance of about 3-5 miles. Four South Korean s were also scrambled to intercept the bomber. [ [http://www.reuters.com/article/topNews/idUSN0564833620080305 Russian bomber again intercepted near U.S. Navy ship] ] [ [http://canadianpress.google.com/article/ALeqM5jv8J4VjgaYX6J0w8k_GboxBxcxlw Russian aircraft approaches US aircraft carrier operating off South Korea] ]

* — Two Tu-95 bombers from , along with two refueling aircraft, were escorted by NATO Tornados and s over the Atlantic. One inflight refueling was witnessed during the escort. [ [http://www.itar-tass.com/eng/level2.html?NewsID=12616032&PageNum=0 Two RF bombers complete patrol mission over Atlantic Ocean] ]

* — Two Tu-95 bombers from Ukrainka air base conducted a 20 hour patrol over the , and were at one point refueled by refueling aircraft. [ [http://www.thaindian.com/newsportal/world-news/russian-bombers-conduct-patrol-over-arctic-ocean_10048663.html Russian bombers conduct patrol over Arctic Ocean] ] [ [http://en.rian.ru/russia/20080514/107337318.html Russian strategic bombers conduct 20-hr patrol over Arctic Ocean] ] NORAD tracked the bombers as they entered the Canadian Air Defense Identification Zone (ADIZ).Fact|date=May 2008 CF-18s intercepted and confirmed their identity as the bombers headed towards the Alaskan airspace.Fact|date=May 2008

Several other modification of the basic Tu-95/Tu-142 airframe have existed, but these were largely unrecognized by Western intelligence or else never reached operational status within the Soviet military. One of these modified Bears, known as the Tu-95V, was used to drop the .

;UKR
* - Retired from service.;USSR
* , - Passed on to Russia and Ukraine.The first Tu-95 division, 106th TBAD (Heavy Bomber Air Division), was formed in 1956. The division commander was twice Hero of the Soviet Union A.G. Molodchi. ['SSM' manuscript from Yahoo TO&E group] The 106th TBAD incorporated the 409th TBAP (Heavy Bomber Air Regiment ) (commander — Colonel M.M. Charitonov) which was raised late in 1956 and the 1006th TBAP (commander — Colonel V.P. Pavlov) raised in 1956. The 106th TBAD's base was Uzin near Kiev. The 1223rd TBAP in Semipalatinsk, under the command of Hero of the Soviet Union colonel V.M. Bezbokov, was raised in 1957, within the 79th Air Division (commander — twice Hero of the Soviet Union General Major M.P. Taran). The 1223rd TBAP's targets were the north of the USA and Canada.
* -