Maki (Hebrew: מק"י‎, an acronym for HaMiflega HaKomunistit HaYisraelit (Hebrew: המפלגה הקומוניסטית הישראלית‎), lit. The Israeli Communist Party) was a communist political party in Israel. It is not the same party as the modern day Maki, which split from it during the 1960s and later assumed its name. 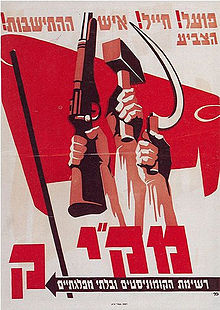 Maki was a descendant of the Palestine Communist Party (PCP), which changed its name to MAKEI (the Communist Party of Eretz Yisrael) after endorsing partition in 1947, and then to Maki. Members of the National Liberation League, an Arab party that had split off from the PCP in 1944, rejoined Maki in October 1948, giving the party both Jewish and Israeli Arab members, whilst the Hebrew Communists also joined the party. It also took over publication of two communist newspapers, Kol HaAm (Hebrew) and Al-Ittihad (Arabic). The party was not Zionist, but recognized Israel, though it denied the link between the state and the Jewish diaspora and asserted the right of Palestinians to form a state in accordance with the United Nations resolution on partition.

In the first Knesset elections in 1949 the party won 3.5% of the vote and four seats, which were taken by Shmuel Mikunis, Eliezer Preminger, Tawfik Toubi and Meir Vilner. During the session, Preminger left the party and re-established the Hebrew Communists before joining Mapam.

In the 1951 elections Maki won 4% of the vote and five seats, with Emil Habibi and Esther Vilenska entering the Knesset. During the session, the Prague Trials of 1952 caused the pro-Soviet Labour Zionist party Mapam to break with the Soviet Union. Unhappy at the decision, Mapam members Avraham Berman and Moshe Sneh left Mapam and set up the Left Faction before joining Maki. The party was also involved in the fall of the Moshe Sharett's fifth government, when it and Herut brought a motion of no-confidence over the government's position on the trial of Malkiel Gruenwald, who had accused Dr. Israel Kasztner of collaborating with the Nazis.

In the 1955 elections, Maki's share of the vote increased again as it claimed six seats in the Knesset. In 1958 it launched a Polish-language newspaper, Walka. However, the 1959 election saw the party perform poorly, winning only three seats.

The 1961 election campaign was helped by the ruling coalition's involvement in the Lavon Affair and the party gained five seats. However, in 1965 internal disagreements saw a split between a largely Jewish group led by Sneh which recognized Israel's right to existence and were critical of the Soviet Union's increasingly anti-Israel stance, and a largely Israeli Arab group which was increasingly anti-Zionist. Sneh's faction retained the name Maki while the pro-Palestinian faction (Tawfik Toubi and Meir Vilner) left to form Rakah, which the Soviet Union recognised as the "official" Communist Party. It was reported in the Soviet media that the Mikunis-Sneh group defected to the bourgois-nationalist camp.[1]

The 1965 elections were a disaster, as the party retained only one seat, and was comprehensively beaten by Rakah who gained three seats. The party repeated its poor performance in the 1969 elections despite its support for the Six-Day War.

In 1973 Maki merged with the Blue-Red movement to form Moked, and subsequently disappeared as an independent party. Moked won one seat in the 1973 elections. Later it became part of Left Camp of Israel (in 1977), then Ratz (in 1981).

In the meantime, Rakah had become the leading force in the Hadash alliance, which it joined in 1977. In 1989, several years after Maki's demise, Rakah decided to change their name and take up the now unclaimed name Maki, to reflect their status as the only officially communist party in Israel. Party leaders asserted at the time that their party, rather than the rival faction which merged among the forces of the Zionist Left, had the better claim upon the historic heritage of what the name stood for in the 1950's and early 1960's.

Maki remains the leading force in Hadash to this day. For its later history, see Maki (current political party).