Out-of-place artifact (OOPArt) is a term coined by American naturalist and cryptozoologist Ivan T. Sanderson for an object of historical, archaeological, or paleontological interest found in a very unusual or seemingly impossible context[1] that could challenge conventional historical chronology.

The term "out-of-place artifact" is rarely used by mainstream historians or scientists. Its use is largely confined to cryptozoologists, proponents of ancient astronaut theories, Young Earth creationists, and paranormal enthusiasts.[2] The term is used to describe a wide variety of objects, from anomalies studied by mainstream science to pseudoarchaeology far outside the mainstream, to objects that have been shown to be hoaxes or to have mundane explanations.

Critics argue that most purported OOPArts which are not hoaxes are the result of mistaken interpretation, wishful thinking, or a mistaken belief that a particular culture couldn't have created an artifact or technology due to a lack of knowledge or materials. Supporters regard OOParts as evidence that mainstream science is overlooking huge areas of knowledge, either willfully or through ignorance.[2]

In some cases, the uncertainty results from inaccurate descriptions. For example: the Wolfsegg Iron was said to be a perfect cube, but in fact it is not; the Klerksdorp spheres were said to be perfect spheres, but they are not; and the Iron pillar of Delhi was said to be stainless, but it has some rust near its base.

Many writers or researchers who question conventional views of human history have used purported OOPArts in attempts to bolster their arguments; they are used to support religious descriptions of pre-history, ancient astronaut theories, or the notion of vanished civilizations that possessed knowledge or technology more advanced than our own.[2]

In rare cases, the validity of claims is validated by mainstream science; i.e., it is proven that some artifact was created with a technology not previously thought to have existed in the ancient culture that built it. One piece that changed mainstream understanding of ancient technology is the Antikythera mechanism, a type of mechanical computer[3][4] which has been fully validated as a real object from about 150–100 BC. Before X-ray examination, its clockwork-like appearance (dating about 1,000 years before clocks were invented) was cited as evidence of alien visitation by fringe sources.[5]

A partially validated example is the Maine penny, from the Goddard site in Blue Hill, Maine, United States. It is an 11th century Norse coin found in an American Indian shell midden. Over 20,000 objects were found over a 15-year period at the site. The sole non-Native artifact was the coin.[6] Some argue it demonstrates Norse visits to North America unknown to archaeology; mainstream belief is that it was brought to the site from Labrador or Newfoundland by native trade.[7]

These are examples of objects that have been argued by various fringe authors (see list) to have been OOPArts. They are categorised according to their current status in the eyes of the mainstream scientific community (for references on this, see the linked article on each item). Here "validation" means that the object in question has been validated as evidence of technological developments that were present in an ancient society and which were previously unknown to us. 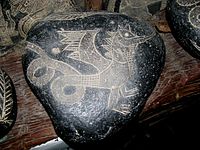 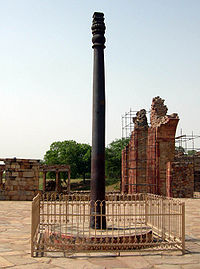 The iron pillar of Delhi