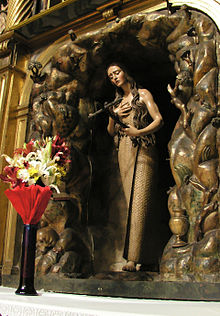 /ˈsɪlɨs/) was originally a garment or undergarment made of coarse cloth or animal hair (a hairshirt) used in some religious traditions to induce some degree of discomfort or pain as a sign of repentance and atonement. In more modern religious circles, the word has come to simply mean any device worn for the same purposes.

The word derives from the Latin cilicium, a covering made of goat's hair from Cilicia, a Roman province in south-east Asia Minor. The reputed first Scriptural use of this exact term is in the original Latin Vulgate of Psalm 35:13, "Ego autem, cum mihi molesti essent, induebar cilicio." This is translated as hair-cloth in the Douai Bible, and as sackcloth in the King James Version and the Book of Common Prayer ("But as for me, when they were sick, my clothing was sackcloth." in the King James Bible). Sackcloth is often mentioned in the Bible as a symbol of mourning and penance, and probably was a form of hairshirt. Sackcloth may also mean burlap. However, sackcloth in the Bible was usually made of coarse, black goat's hair. 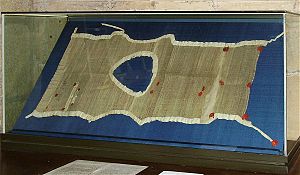 There is some evidence, based on analyses of both clothing represented in art and preserved skin imprint patterns at Çatalhöyük in Turkey, that the usage of the cilice predates written history. This finding has been mirrored at Göbekli Tepe, another Anatolian site, indicating the widespread manufacturing of cilices. Ian Hodder has argued that "self-injuring clothing was an essential component of the Catalhöyük culturoritual entanglement, representing 'cleansing' and 'lightness'."[1]

To show deep repentance, it was the custom in Biblical times in the Hebrew religion to wear a hairshirt (sackcloth) and ashes as a sign of repentance and atonement. Such garments or adornments have been worn at various times in the history of the Christian faith, to mortify the flesh or as penance for adorning oneself. Being made of rough cloth, generally woven from goats' hair, and worn close to the skin, they would feel very itchy.

It was in common usage in monasteries and convents throughout history up until the 1960s, and has been endorsed by popes as a way of following Christ, who died in a bloody crucifixion and who gave this advice: "Let him deny himself, take up his cross daily and follow me."[2][3] Supporters say that opposition to mortification is rooted in having lost (1) the "sense of the enormity of sin" or offense against God, and the consequent penance, both interior and exterior, (2) the notions of "wounded human nature" and of concupiscence or inclination to sin, and thus the need for "spiritual battle",[4] and (3) a spirit of sacrifice for love and "supernatural ends", and not only for physical enhancement.[citation needed]

Closeup of a metal cilice with inwardly-pointing spikes

Some religious orders within the Catholic Church use the cilice as a form of "corporal mortification", as well as some lay people, notably some faithful of the Prelature of Opus Dei.[5] According to John Allen, an American Catholic writer, its practice in the Catholic Church is "more widespread than many observers imagine".[6] Thomas Becket was wearing a hairshirt when he was martyred, St. Patrick reputedly wore a cilice, Charlemagne was buried in a hairshirt, and Henry IV, Holy Roman Emperor and King of Germany, famously wore one in the Walk to Canossa during the Investiture Controversy. Prince Henry the Navigator was found to be wearing a hairshirt at the time of his death in 1460.[citation needed] In modern times it has been used by Mother Teresa, Saint Padre Pio, and slain archbishop Óscar Romero. The Russian author Aleksandr Solzhenitsyn was also known to wear a hairshirt.[7]

When Thomas Becket was being prepared for burial in England in 1170, the cold English air stimulated so many of the critters occupying his hairsuit that it "boiled over with them like water in a simmering cauldron."[8] 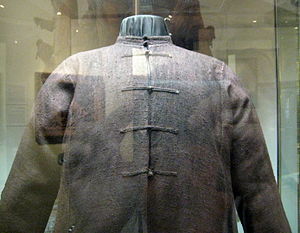 Ivan the Terrible's cilice (16th century). The tsar wanted to die like a monk.

In Molière's novel, Tartuffe, the title character is shown to be a religious hypocrite when he wears a hair shirt with the hair lining facing outward, so that it can be seen, rather than felt.

In Ayn Rand's novel, The Fountainhead, Gail Wynand describes his relationship with Howard Roark as "in the nature of a hair shirt [sic]." Wynand seems to view Roark as a penance that will absolve him of his sins.

The Andrew Bird song "The Water Jet Cilice" refers to a girl experiencing the pain of penance.

In Dan Brown's novel The Da Vinci Code, one of the antagonists, an albino monk named Silas associated with the religious organization Opus Dei, wears a cilice. In the film, Silas' cilice clearly draws blood, though even modern metal cilices do not, according to American Catholic writer John Allen.

The Marvel Comics character Penance (formerly Speedball) commissioned the creation of a suit with 612 internal spikes to represent each person who died in an explosion for which he felt responsible, so that he'd be reminded of their pain in everything he did.

In Lover Mine, the 8th book of the Black Dagger Brotherhood, the character Xhex wears cilices to keep her symphath side at bay.

In Daniel Silva's novel The Confessor, the Vatican Secretary of State, Cardinal Marco Brindisi, wears a cilice in the form of a spiked chain around his right thigh.

In the Barenaked Ladies' song "What A Good Boy," the singer describes a hairshirt he wears as being woven from the hair of the woman he sings to.

In Ken Follet's 'Pillars of the Earth', King Henry II of England, beneath his cloak he wore a green tunic and a hairshirt.

R.E.M. has a song titled "Hairshirt" on their album "Green".

also in Tristan et Iseut, Iseut wears one to do penance for disbelieving a message from Tristan