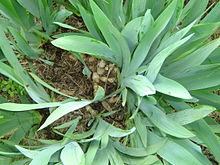 A clonal colony of Iris germanica. Note the rhizomatious stems by which the plant reproduces.

A clonal colony or genet is a group of genetically identical individuals (e. g., plants, fungi, or bacteria) that have grown in a given location, all originating vegetatively (not sexually) from a single ancestor. In plants, an individual in such a population is referred to as a ramet. In fungi, "individuals" typically refers to the visible fruiting bodies or mushrooms that develop from a common mycelium which, although spread over a large area, is otherwise hidden in the soil. Clonal colonies are common in many plant species. Although many plants reproduce sexually through the production of seed, some plants reproduce by underground stolons or rhizomes. Above ground these plants appear to be distinct individuals, but underground they remain interconnected and are all clones of the same plant. However, it is not always easy to recognize a clonal colony especially if it spreads underground and is also sexually reproducing.

A group of 47,000 Quaking Aspen (Populus tremuloides) clones (nicknamed "Pando") in the Wasatch Mountains, Utah, USA, is sometimes considered the world's largest organism by mass, covering 43 hectares (110 acres). It is possible that other unknown clonal colonies of trees rival or exceed its size.

The only known plant of King's Lomatia (Lomatia tasmanica) in Tasmania is a clonal colony estimated to be 43,600 years old.[1] Another possible candidate for oldest organism on earth is a stand of the marine plant Posidonia oceanica in the Mediterranean Sea, which could be up to 100,000 years of age.[2]