Weathering is the breaking down of rocks, soils and minerals as well as artificial materials through contact with the Earth's atmosphere, biota and waters. Weathering occurs in situ, or "with no movement", and thus should not be confused with erosion, which involves the movement of rocks and minerals by agents such as water, ice, wind, and gravity.

The materials left over after the rock breaks down combined with organic material creates soil. The mineral content of the soil is determined by the parent material, thus a soil derived from a single rock type can often be deficient in one or more minerals for good fertility, while a soil weathered from a mix of rock types (as in glacial, aeolian or alluvial sediments) often makes more fertile soil. In addition many of Earth's landforms and landscapes are the result of weathering processes combined with erosion and redeposition. 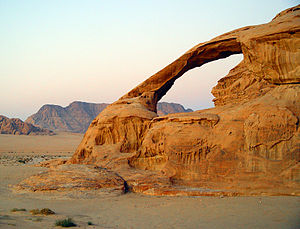 Thermal stress weathering (sometimes called insolation weathering)[2] results from expansion or contraction of rock, caused by temperature changes. Thermal stress weathering comprises two main types, thermal shock and thermal fatigue. Thermal stress weathering is an important mechanism in deserts, where there is a large diurnal temperature range, hot in the day and cold at night.[citation needed] The repeated heating and cooling exerts stress on the outer layers of rocks, which can cause their outer layers to peel off in thin sheets. Although temperature changes are the principal driver, moisture can enhance thermal expansion in rock. Forest fires and range fires are also known to cause significant weathering of rocks and boulders exposed along the ground surface. Intense, localized heat can rapidly expand a boulder. 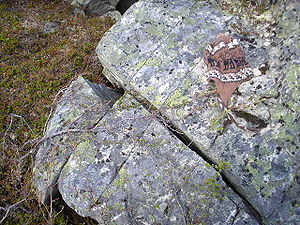 Frost weathering, frost wedging, ice wedging or cryofracturing is the collective name for several processes where ice is present. This processes include frost shattering, frost-wedging and freeze-thaw weathering. This type of weathering is common in mountain areas where the temperature is around the freezing point of water. Certain frost-susceptible soils expand or heave upon freezing as a result of water migrating via capillary action to grow ice lenses near the freezing front.[3] This same phenomenon occurs within pore spaces of rocks. The ice accumulations grow larger as they attract liquid water from the surrounding pores. The ice crystal growth weakens the rocks which, in time, break up.[4] It is caused by the approximately 10% (9.87) expansion of ice when water freezes, which can place considerable stress on anything containing the water as it freezes.

Freeze induced weathering action occurs mainly in environments where there is a lot of moisture, and temperatures frequently fluctuate above and below freezing point, especially in alpine and periglacial areas. An example of rocks susceptible to frost action is chalk, which has many pore spaces for the growth of ice crystals. This process can be seen in Dartmoor where it results in the formation of tors. When water that has entered the joints freezes, the ice formed strains the walls of the joints and causes the joints to deepen and widen. When the ice thaws, water can flow further into the rock. Repeated freeze-thaw cycles weaken the rocks which, over time, break up along the joints into angular pieces. The angular rock fragments gather at the foot of the slope to form a talus slope (or scree slope). The splitting of rocks along the joints into blocks is called block disintegration. The blocks of rocks that are detached are of various shapes depending on rock structure.

Pressure release could have caused the exfoliated granite sheets shown in the picture.

In pressure release, also known as unloading, overlying materials (not necessarily rocks) are removed (by erosion, or other processes), which causes underlying rocks to expand and fracture parallel to the surface. Often the overlying material is heavy, and the underlying rocks experience high pressure under them, for example, a moving glacier. Pressure release may also cause exfoliation to occur.

Intrusive igneous rocks (e.g. granite) are formed deep beneath the Earth's surface. They are under tremendous pressure because of the overlying rock material. When erosion removes the overlying rock material, these intrusive rocks are exposed and the pressure on them is released. The outer parts of the rocks then tend to expand. The expansion sets up stresses which cause fractures parallel to the rock surface to form. Over time, sheets of rock break away from the exposed rocks along the fractures. Pressure release is also known as "exfoliation" or "sheeting"; these processes result in batholiths and granite domes, an example of which is Dartmoor.

Hydraulic action occurs when water (generally from powerful waves) rushes rapidly into cracks in the rock face, thus trapping a layer of air at the bottom of the crack, compressing it and weakening the rock. When the wave retreats, the trapped air is suddenly released with explosive force. 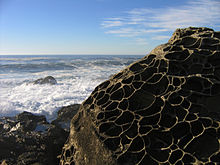 Salt crystallization, otherwise known as haloclasty, causes disintegration of rocks when saline (see salinity) solutions seep into cracks and joints in the rocks and evaporate, leaving salt crystals behind. These salt crystals expand as they are heated up, exerting pressure on the confining rock.

Salt crystallization may also take place when solutions decompose rocks (for example, limestone and chalk) to form salt solutions of sodium sulfate or sodium carbonate, of which the moisture evaporates to form their respective salt crystals.

The salts which have proved most effective in disintegrating rocks are sodium sulfate, magnesium sulfate, and calcium chloride. Some of these salts can expand up to three times or even more.

It is normally associated with arid climates where strong heating causes strong evaporation and therefore salt crystallization. It is also common along coasts. An example of salt weathering can be seen in the honeycombed stones in sea wall. Honeycomb is a type of tafoni, a class of cavernous rock weathering structures, which likely develop in large part by chemical and physical salt weathering processes.

Living organisms may contribute to mechanical weathering (as well as chemical weathering, see 'biological' weathering below). Lichens and mosses grow on essentially bare rock surfaces and create a more humid chemical microenvironment. The attachment of these organisms to the rock surface enhances physical as well as chemical breakdown of the surface microlayer of the rock. On a larger scale, seedlings sprouting in a crevice and plant roots exert physical pressure as well as providing a pathway for water and chemical infiltration.

Chemical weathering changes the composition of rocks, often transforming them when water interacts with minerals to create various chemical reactions. Chemical weathering is a gradual and ongoing process as the mineralogy of the rock adjusts to the near surface environment. New or secondary minerals develop from the original minerals of the rock. In this the processes of oxidation and hydrolysis are most important.

The process of mountain block uplift is important in exposing new rock strata to the atmosphere and moisture, enabling important chemical weathering to occur; significant release occurs of Ca++ and other minerals into surface waters.[5] 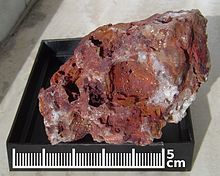 A pyrite cube has dissolved away from host rock, leaving gold behind

Rainfall is acidic because atmospheric carbon dioxide dissolves in the rainwater producing weak carbonic acid. In unpolluted environments, the rainfall pH is around 5.6. Acid rain occurs when gases such as sulfur dioxide and nitrogen oxides are present in the atmosphere. These oxides react in the rain water to produce stronger acids and can lower the pH to 4.5 or even 3.0. Sulfur dioxide, SO2, comes from volcanic eruptions or from fossil fuels, can become sulfuric acid within rainwater, which can cause solution weathering to the rocks on which it falls.

Some minerals, due to their natural solubility (e.g. evaporites), oxidation potential (iron-rich minerals, such as pyrite), or instability relative to surficial conditions (see Goldich dissolution series) will weather through dissolution naturally, even without acidic water.

One of the most well-known solution weathering processes is carbonation, the process in which atmospheric carbon dioxide leads to solution weathering. Carbonation occurs on rocks which contain calcium carbonate, such as limestone and chalk. This takes place when rain combines with carbon dioxide or an organic acid to form a weak carbonic acid which reacts with calcium carbonate (the limestone) and forms calcium bicarbonate. This process speeds up with a decrease in temperature, not because low temperatures generally drive reactions faster, but because colder water holds more dissolved carbon dioxide gas.[citation needed] Carbonation is therefore a large feature of glacial weathering.

The reactions as follows:

Carbonation on the surface of well-jointed limestone produces a dissected limestone pavement. This process is most effective along the joints, widening and deepening them. 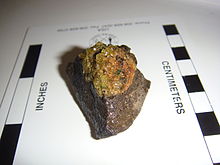 Olivine weathering to iddingsite within a mantle xenolith

Mineral hydration is a form of chemical weathering that involves the rigid attachment of H+ and OH- ions to the atoms and molecules of a mineral.

When rock minerals take up water, the increased volume creates physical stresses within the rock. For example iron oxides are converted to iron hydroxides and the hydration of anhydrite forms gypsum.

Hydrolysis on silicates and carbonates

Hydrolysis is a chemical weathering process affecting silicate and carbonate minerals. In such reactions, pure water ionizes slightly and reacts with silicate minerals. An example reaction:

This reaction results in complete dissolution of the original mineral, assuming enough water is available to drive the reaction. However, the above reaction is to a degree deceptive because pure water rarely acts as a H+ donor. Carbon dioxide, though, dissolves readily in water forming a weak acid and H+ donor.

This hydrolysis reaction is much more common. Carbonic acid is consumed by silicate weathering, resulting in more alkaline solutions because of the bicarbonate. This is an important reaction in controlling the amount of CO2 in the atmosphere and can affect climate.

Aluminosilicates when subjected to the hydrolysis reaction produce a secondary mineral rather than simply releasing cations. 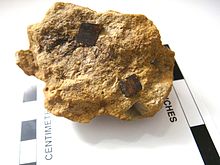 Within the weathering environment chemical oxidation of a variety of metals occurs. The most commonly observed is the oxidation of Fe2+ (iron) and combination with oxygen and water to form Fe3+ hydroxides and oxides such as goethite, limonite, and hematite. This gives the affected rocks a reddish-brown coloration on the surface which crumbles easily and weakens the rock. This process is better known as 'rusting', though it is distinct from the rusting of metallic iron. Many other metallic ores and minerals oxidize and hydrate to produce colored deposits, such as chalcopyrites or CuFeS2 oxidizing to copper hydroxide and iron oxides.

A number of plants and animals may create chemical weathering through release of acidic compounds, i.e. moss on roofs is classed as weathering. Mineral weathering can also be initiated and/or accelerated by soil microorganisms. 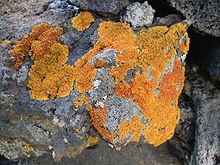 The symbiotic mycorrhizal fungi associated with tree root systems can release inorganic nutrients from minerals such as apatite or biotite and transfer these nutrients to the trees, thus contributing to tree nutrition.[6] It was also recently evidenced that bacterial communities can impact mineral stability leading to the release of inorganic nutrients.[7] To date a large range of bacterial strains or communities from diverse genera have been reported to be able to colonize mineral surfaces and/or to weather minerals, and for some of them a plant growth promoting effect was demonstrated.[8] The demonstrated or hypothesised mechanisms used by bacteria to weather minerals include several oxidoreduction and dissolution reactions as well as the production of weathering agents, such as protons, organic acids and chelating molecules.

Buildings made of any stone, brick or concrete are susceptible to the same weathering agents as any exposed rock surface. Also statues, monuments and ornamental stonework can be badly damaged by natural weathering processes. This is accelerated in areas severely affected by acid rain.