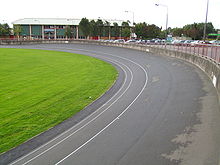 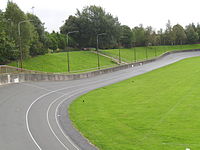 The 460 metres (1,509.2 ft) outdoor floodlit cycling velodrome was well known for its slight uneveness, caused by subsidence, as the stadium is build on the site of an old tip. There was a six lane cinder running track inside they cycle track at one point, but this has since been removed and replaced by a full size football pitch (in the middle of the velodrome.[1] There was also extensive seating and covered area with a judges box in the 1960s, on an area which is now a grass bank behind the back straight of the cycle track.[2] At that time, the finish line on the cycle track was located at the opposite side of the cycle track to its current location.

Maindy remains to be used extensively for training and racing and hosts many events such as the Cardiff International Grand Prix.[3] It is used in particular for teaching youngsters to ride. At 460 metres in length and 25 degree bankings,[4] the track is not as steep as the majority of velodromes, and therefore perfect for those new to the sport. The concrete surface is also used for floodlit training sessions during the winter, where road bicycles are used as opposed to track bicycles.

The cycle track has recently been resurfaced, seeing an end to the characteristic red asphalt surface which covered it for several years,[4] funded by the Eddie Smart memorial fund.