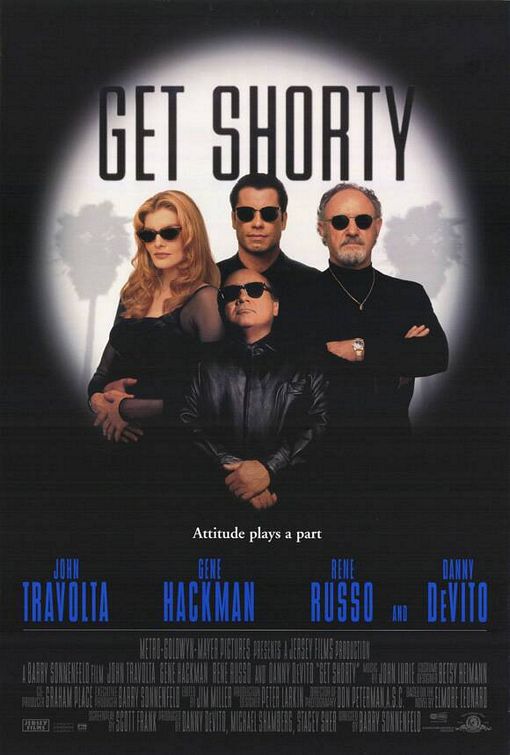 A 1995 film, "Get Shorty", based on the novel of the same name, was directed by and starred as Chili Palmer, as Harry Zimm, as Karen Flores, as Bo Catlett, as Ray "Bones" Barboni, as Bear (Catlett's muscle man), as Leo and as Martin Weir. The plot remained true to the Elmore Leonard book except for a few minor details.

() is a shylock (a ) in who has an unusual fan interest in classic and B-movie cinema. After lunch, at a restaurant in Miami, Chili is told by the restaurant manager his expensive leather was "borrowed" by a rival mobster, Ray "Bones" Barboni (). Chili promptly tracks down Ray Bones, breaks his nose and grabs his jacket. Bones wants revenge, but his boss Jimmy Cap (, who appears uncredited), tells him that Chili works for Momo, a top boss in Brooklyn, and he should not be messed with. Unfortunately, Momo dies of a heart attack at a surprise birthday party. This leaves Chili under the thumb of a vindictive Ray Bones, who quickly takes advantage of the situation and orders Chili to collect a large shylock debt from the widow of a dead man, Leo DeVoe ().

When Chili visits Leo's widow Fay (), she tells him Leo is not actually dead. It turns out that Leo did board an ill-fated flight, but impatiently stepped off to drink at the bar while the plane was being repaired on the tarmac and it took off without him. When the airplane crashed, Leo was assumed dead and his wife was issued $300,000 in . She tells Chili that Leo took the money and left for Las Vegas, where he has been winning big.

In Las Vegas, Chili learns from a casino manager that Leo has since traveled to . Dick Allen, the casino manager in Vegas () asks Chili to seek out a L.A. producer named Harry Zimm () while in L.A., as Harry owes the casino money. Chili confronts Harry about his debt. Harry agrees to pay it back in 60 days. With the business talk complete, Chili pitches a idea to Harry: a plot about a Miami shylock chasing a scamming businessman to L.A. It's clear that Chili, a big time movie fan, would like to get involved in the film industry. Harry is interested in the film's concept, but he relates a involving the dangerous Bo Catlett, a movie investor and drug dealer. Chili in the meantime finds Leo living in a first-class hotel and takes Leo's stolen insurance money. But he does not inform Ray Bones.

Catlett () is coming to see Harry, who is supposed to be working on a film with him. Catlett himself is in a jam: He owes a mobster drug money. Catlett tries to pay back the money by sending the mobster's nephew Yayo Portillo to a bag of cash in an airport locker - a location being watched by federal drug agents. Knowing he could not pick up the money without getting caught, Yayo threatens Catlett that he will tell the police about him. In response, Catlett shoots him.

When Bo visits Harry to see how the new movie is going, Chili is present. He coolly tells Catlett that Harry will make their movie when he can, and that threatening Harry to hurry will only lead to trouble. It becomes apparent that Chili and Catlett are rival wanna-be movie who both want to break into the business and need Harry's help.

Chili becomes attracted to Karen Flores (), who we learn was once a promising actress but now mainly finds work in low-budget , much like the cheap ones Harry makes. Catlett says he will pay Harry 500 grand to cut ties with Chili and instead co-produce new movies with him. Catlett's production start-up money is in an airport locker and he gives Harry the key. (This is the same locker under earlier.) Chili immediately recognizes it as a set-up and takes the key to see for himself. Around this time, Chili fends off an attack from Catlett's bodyguard, Bear (). After talking reasonably with Bear, (a professional stuntman), Chili tries to persuade him that Catlett is a boss unworthy of his services.

Chili believes he can get his "shylock movie" (his own story) made faster if he gets famous actor Martin Weir () to star. Using his new connection Karen, who is Weir's ex wife, Chili meets with Weir and pitches him the idea. Weir is immediately intrigued. Later that same night, Harry, still in desperate need of movie money, drunkenly telephones Ray Bones in Miami, rudely daring him to come out to L.A. and meet. Bones does come to L.A., not for a movie investment, but to find Chili and also Leo's money. Bones violently beats up Harry, who is sent to the hospital to have his jaw wired. A romance has blossomed between Chili and Karen, but their happiness almost ends when Catlett arrives at Karen's house in the middle of the night, exactly as Chili had earlier. Catlett kidnaps Karen and demands Chili bring the money owed to him (as he desperately needs it to pay off the major drug dealer, the uncle of Yayo Portillo). Yayo's uncle Escobar has arrived from Mexico looking for his nephew, whom Bo has killed. Chili saves Karen and turns over the money. Reneging on their deal, Catlett warns he will kill them both. Bear betrays Catlett and kills him, saving Chili and Karen.

Ray Bones tracks down Chili and demands Leo's money. Searching Chili's pockets, he finds the airport locker key and Chili hints the money is at the airport, so Bones heads there to pick up the cash.

At the airport, Bones opens the locker and police confront him instantly. This scene blends into a fictional one, being filmed on a Hollywood set, with actor in the role of Ray Bones while Martin Weir is the shylock. Chili's "story" is now complete and the movie is being made into a Penny Marshall film. Chili and Karen are co-producers. Bear is a technical consultant. They all leave the set at the end of a day, happy with their new lives.

In the novel, Palmer and Flores attempt to woo Weir in a nightclub, whilst in the movie they visit his house. In the movie there is an additional confrontation between Zimm and Bones which results in Zimm getting a concussion and being framed for killing a partner of Catlett's, whom Bones shot when he walked in on the altercation; this is excluded from the novel. The ending is also slightly different.

*Travolta originally turned down the picture, until he got a call from asking him to "read the book". Travolta read the book and realized many of the best parts had been paraphrased. He then requested for them to add those parts back into the screenplay, and Travolta signed up thereafter.

*Early in the movie, actor appears as the gangster Jimmy Cap in an uncredited cameo role. Throughout the scene he is being massaged by two women while he holds a pair of thick glasses in his hand and a small tattoo is visible on his right arm. This is a throwback to a similar scene in "" where , this time playing the role of , is being massaged in the exact same pose just before a enters and shoots him in the eye (a form of execution later referred to as the ).

*Director has a cameo as the doorman who opens the limousine door for Leo DeVoe at the high class hotel.

* has a cameo as Ray Bones (played by throughout the film) in the film at the end of the film. Coincidentally, Keitel would play in the film "Red Dragon", a part originated by Farina in the film "Manhunter". Harvey Keitel would also later play music producer Nick Carr in the sequel "", a completely separate character.

*When Karen tells Chili Palmer (John Travolta) that he could be an actor, he agrees, but says he couldn't do something like the movie "where the three guys get left with the baby", describing the film "". Travolta actually did do similar movies: "" and its sequels.

*At the beginning of the film, Ray Bones makes jokes at Chili's expense. He has two toadies with him. The one on the right, who says, "That was a good one", is played by an actor named Ernest "Chili" Palmer. Palmer, a tough, streetwise Florida native, was writer 's model for the original book's character. According to an article in the , he claims not to have been involved with gangsters, loan sharking, or anything of that sort. He's probably more a model from the point of view of personality and mannerisms. When the filmmakers found out from Leonard that there was a real Chili Palmer, they gave him a bit part in the film. Ray Bones' other toady is played by Jeffrey Stephan, who was John Travolta's stand-in for the film.

*Martin Weir (Danny DeVito) meets the others at a trendy restaurant called Ivy's. He calls a waitress named Stephanie over, asks her name, and orders an egg white omelet. She is played by Stephanie Kemp, a production assistant on the film.

*Harry Zimm (Gene Hackman) shows up at Ivy's with his hands in casts and a neck brace on. As he enters the restaurant, a customer pats him on the back and says, "Attaboy, Killer!" This man, listed in the credits as "Duke", is played by Greg Goossen, who was Hackman's stand-in for the film. Goossen and the film's star, Gene Hackman, have worked steadily together since "The Package" (1989), and Goossen frequently serves as Hackman's stand-in. Goossen was a professional baseball player who played first base for the , Seattle Pilots, and Washington Senators from 1965 to 1970.

*Big star Martin Weir (DeVito) meets Harry (Hackman) for lunch and tells him that he's really glad that Harry rejected him ten years ago when he auditioned for the part of "Eddie Solomon, the pedophile clown in 'Birthday Boy'." This is a reference by screenwriter to his buddy, screenwriter ("", "Men in Black"). The two often put derogatory references to each other in their scripts.