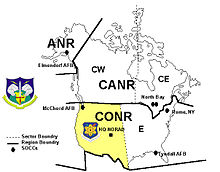 The Western Air Defense Sector (WADS) is a United States Air Force unit and a component of the Washington Air National Guard. It is stationed at McChord Field, Washington

It operates a Sector Operations Control Center (SOCC) at McChord AFB, as part of the Joint Surveillance System (JSS) which had replaced SAGE in 1983. This system enjoins state-of-the-art air defense systems and cutting-edge computer technology to significantly increase surveillance and identification capabilities, and better protect the nation's airways from intrusion and attack. It relies on digitized radar inputs from Air Route Surveillance Radar (ARSR) sites jointly operated by the Federal Aviation Administration and the Air Force, and tethered aerostat radar balloons. It is fully integrated with the E-3A Airborne early warning and control (AEW&C) system and the Joint Surveillance Target Attack Radar System (E-8 Joint STARS).

The SOCC employs 27 NORAD contingency suites, and 31 Battle Control System-Fixed (BCS-F) displays. A next-generation air sovereignty system, BCS-F fuses data from airborne, ground and naval elements and civil air traffic sensors into an integrated air picture. This allows commanders to surveil and monitor the airspace above, beyond and within U.S. and Canadian borders, providing a major component for homeland defense.

It also incorporates a newly-developed situational awareness system that gives WADS unprecedented tools and technology to assist state and local responders in dealing with natural disasters. It has the redundant capability to cover the EADS if the call arises.

WADS is a Washington Air National Guard unit which reports directly to AFNORTH/1st Air Force at Tyndall AFB, Florida. The Sector reports to Air Combat Command (ACC) and to NORAD headquarters, in Colorado Springs, Colorado in its federal role. NORAD is a bi-national United States and Canadian organization charged with the missions of aerospace warning and aerospace control for North America.

The Sector’s primary mission is Guarding America’s Skies. This 24/7 guardian role involves the use of radar and communications systems to monitor air traffic from the Mississippi River west to the Pacific Ocean, and from the Canadian border south to the Mexican border.

The WADS works closely with other federal agencies including the Federal Aviation Administration (FAA), Secret Service and U.S. Customs Service as well as its sister military services – the U.S. Navy, U.S. Army and U.S. Coast Guard.

As part of the Washington Air National Guard, WADS reports to the Governor through the Washington National Guard offices at Camp Murray. The Sector works with state agencies to provide rapid response in the event natural or manmade disasters, and participate in disaster preparedness exercises. The Sector is able to provide an air picture to help in rescue operations in the event of disasters.

Air National Guard units aligned under 1AF (AFNORTH) with an air defense mission under WADS are: 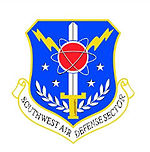 It was established in January 1958 with a mission to train and maintain tactical flying units in state of readiness in order to defend the Southeastern United States, assuming control of former ADC Western Air Defense Force units located in western Washington west of the Cascade Range. The Sector was inactivated on 1 April 1966 as part of an ADC consolidation and reorganization; and its units were reassigned to the 25th Air Division.

On 1 April 1966, SEADS was inactivated, as did the other 22 sectors in the country. Most of its assets were assumed by the 25th Air Division. The DC-12 SAGE Direction Center was assigned to the 25th Air Division, remaining in operation until 31 December 1969. Today it is used as the Western Air Defense Sector (WADS) Joint Surveillence System (JSS) Sector Operations Control Center (SOCC)