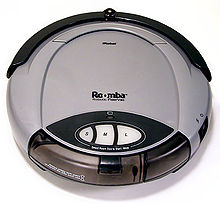 First generation Roomba vacuums the carpets in a domestic environment

A domestic robot is a robot used for household chores. Thus far, there are only a few limited models, though science fiction writers and other speculators have suggested that they could become more common in the future. In 2006, Bill Gates wrote an article for Scientific American titled "A Robot in Every Home".[1][vague]

Many domestic robots are used for basic household chores, such as the Electrolux Trilobite, Roomba and the SLAM based Neato Robotics vacuum cleaner robot. Others are educational or entertainment robots, such as the HERO line of the 1980s or the AIBO. While most domestic robots are simplistic, some are connected to WiFi home networks or smart environments and are autonomous to a high degree. There were an estimated 3,540,000 service robots in use in 2006, compared with an estimated 950,000 industrial robots.[2] 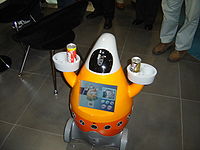 Serving robot at the "Ubiquitous Dream" exhibition in Seoul, Korea on June 24, 2005

Home transport robots are a main element in the domestic robotic system, because they join specialized processes, moving objects at home (i.e. clothes from the bathroom to the washing machine or glasses from the table to the dishwasher):

Many cartoons feature robot maids, notably Rosie the Robot from The Jetsons. Maid Robots are especially prominent in anime (in Japanese, they are called Meido Robo or Meido Roboto), and their Artificial Intelligence ranges from rudimentary to fully sentient and emotional, while their appearance ranges from obviously mechanical to human-like.