Monkey and Al (portrayed by Johnny Vegas), as shown on one of ITV Digital's adverts

Monkey (also known as ITV Digital Monkey or PG Tips Monkey, and often pronounced "Monkeh" in imitation of Johnny Vegas' Lancashire accent), is an animated puppet advertising character in the form of a knitted sock monkey. He was first produced by The Jim Henson Company via their UK Creature Shop, puppeteered by Nigel Plaskitt and Susan Beattie and voiced by comedian Ben Miller.

Monkey has appeared in advertising campaigns in the United Kingdom for both the television company ITV Digital (now defunct) and the tea brand PG Tips, as well as being occasionally featured in TV programmes. Monkey is notable as one of a small number of advertising characters to eclipse the popularity of the product they advertise and also to be reused to advertise a completely different product.[1]

A series of high profile adverts for ITV Digital featured the laid-back, droll and composed Monkey (in a variety of t-shirts) playing the straight man to the comedian Johnny Vegas's slob character "Al". Monkey was one of the few positive public relations successes of ITV Digital. Purchasers of ITV Digital were sent a free soft toy Monkey with their subscription.

For a period during the advertising campaign and after ITV Digital's bankruptcy, the original promotional Monkey toys were in high demand and short supply. One sold for £150 at the bankruptcy auction[2] and they were selling for several hundred pounds on eBay,[3] where you could also find replica Monkey knitting patterns delivered by email selling for several pounds. Later the Gadget Shop purchased the remaining promotional toys from ITV Digital's liquidators and sold them through their retail stores. These saw a boost in popularity after an appearance in the second series of award-winning British sitcom The Office.

As Monkey was created and owned by advertising agency Mother rather than by ITV Digital itself, it was the subject of a legal dispute as both claimed the rights to the character.[4][5] This prevented its use for some time, despite many organisations being keen to acquire the rights.[6] The dispute was eventually resolved by both parties agreeing to donate the intellectual property rights for Monkey to Comic Relief. Following the resolution of the dispute, Monkey appeared in a few TV shows, with the BBC using it for 2001's Comic Relief, as well as making a guest appearance on ITV's coverage of the 2002 BRIT Awards.[7] In both cases Monkey appeared without Johnny Vegas. In 2003, the BBC commissioned a variety show to be hosted by Monkey.[8] A pilot was filmed titled "Watch With Monkey" and featuring Dawn French and the Ukulele Orchestra of Great Britain. The pilot is yet to be televised. 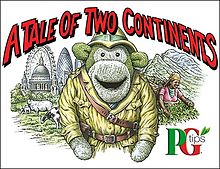 Promotional poster of A Tale of Two Continents

In January 2007, Monkey and Vegas reprised their double act in a new series of advertisements for PG Tips tea. The first advertisement was named "The Return" and the adverts make reference to PG Tips' popular series of adverts featuring live chimps which ran between 1956 and 2002 as well as to ITV Digital going "belly up".

PG launched a website selling the newly branded "PG Monkey" merchandise with profits being donated to Comic Relief, who still own the intellectual property rights. The online shop has since closed but during promotions PG Tips have given away free mini-Monkeys packaged with their tea.

Monkey also appeared in a short advertising film which was shown in cinemas at the beginning of selected showings of Horton Hears a Who, The Spiderwick Chronicles, Hannah Montana 3D and The Game Plan. The film was released on 21 March 2008. The film is called A Tale of Two Continents and has Monkey portraying various historical figures as he attempts to make the perfect cup of tea in the Kenya tea farms and then safely take it across the world to England for Queen Elizabeth I.[9]

As a child, Monkey was frequently bullied at school, due to his left eye being larger than his right, causing his schoolmates to refer to him as "big eye". He studied at the Royal Academy of Dramatic Art (RADA) and gained a grade 7 for piano.[10] Monkey made his original screen debut choreographing and starring in the first ever Monkey-based hip-hop workout Laserdisc on GMTV breakfast.[10] He then starred as the host of an experimental Hawaiian-fusion cooking show. Although only twenty-five episodes were ultimately shot, the show did quite well in Turkey.[10]

In 2001, Monkey was teamed up with Al in order to advertise ITV Digital. Monkey temporarily abandoned Al after being humiliated at ITV Digital's bankruptcy.[11] He auditioned for the role of the titular character in Peter Jackson's King Kong, though he lost the part to Andy Serkis.[10] After spending time being tied to a lorry bumper, he returned to Al and the two began working in advertising PG Tips.[11]

Monkey is sometimes portrayed as being quite cowardly; examples include his desertion of Al after the fall of ITV Digital,[11] and his refusal to take responsibility for dropping a ceramic bowl dating back to 3000 BC, despite being filmed doing so.[12] He is also prone to miserliness, having admitted that he re-uses discarded plasters he finds in swimming pools.[12] Although his occupation is that of actor/presenter/comedian, he admits he would do anything anyone is willing to give money for.[10] Monkey hoards both his and Al's wages, deliberately neglecting to inform the naive Al of the fact that they are in fact paid for their work, stating "I don't bother Al with details" and that his money is "safely invested in a portfolio of bananas".[13] Despite his turbulent relationship with Al, the two share the same bed.[14] Monkey is shown to be very passionate about tea, his favourite serving method being "three stirs clockwise, two stirs back, one and three quarters sugars".[11] He vehemently insists that tea bags should precede milk when brewing.[13] His exact species is never clarified; Monkey himself denies being a chimpanzee (the CHimp logo on his tea-shirt puns on CH sounding like the Chinese word for tea), and his response to Al's idea that he may be "half monkey-half chimp" is limited to "speak for yourself".[13] Though he claims to be a "ladies monkey", he is caught by Al surfing, giving exaggerated descriptions of his physical appearance.[15] It is implied that Monkey may be a transvestite; he is shown wearing a woman's nightcap,[14] a sheath dress[16] and a ballet tutu.[17][original research?]