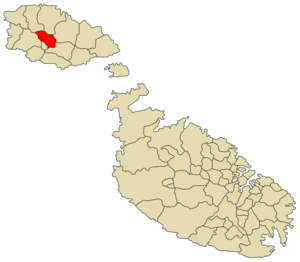 Victoria or Città Vittoria is the capital of Gozo, an island of the Maltese in the . The town has a total population of 6,414 (November 2005), and by population is the largest locality in Gozo.

Victoria is the name given in 1887 by the British government on the occasion of 's , at the request of the Bishop of Malta, Mons. Sir Pietro Pace. However Gozitans still often refer to it by its old name, Rabat. The area around Victoria, situated on a hill near the centre of the island, has been settled since times.

In the heart of Victoria lies the Citadella (Citadel), which has been the centre of activity of the island since possibly times, but is known to be first fortified during the approximately around 1500 BC. It was later developed by the and continued into becoming a complex by Roman times.

The north side of the Citadel dates back to the domination period, while the south flank, overlooking Victoria, was re-constructed under the Knights of St. John, namely between 1599 and 1603 The massive defensive stone walls of the fortifications rise above the town and were built by the Knights to protect the village communities from foraging attempting to take slaves and threatened invasion of Moslem forces fighting Christendom.

Within its walls lies a fine 17th century Cathedral designed by , the Maltese architect who also built the Cathedral of . It is said that it lies on the site where a Roman temple dedicated to Juno once stood. It is most famous for the remarkable painting on its ceiling, which depicts the interior of a dome that was never built.

Five feasts are celebrated in Victoria, the island of Gozo, the two main feast are the feast of St. George and the feast of Assumption of the Virgin Mary. The feast dedicated to St. Mary, devoted in its Cathedral situated in the centre of the Citadel dominating the whole island and the another one dedicated to St. George, the patron saint of Gozo celebrated in St. George's Basilica in the heart of Victoria.

This which covers the whole of Victoria, caters for a little over half of population of Victoria, as it is a personal parish (as opposed to other parishes who are territorial) operating in the city of Victoria. It's dedicated to has the status of a . This church was built in the 1670s and suffered severe damage in the earthquake of 1693. A new facade was built in 1818. The dome and the aisles are of recent construction (1930s and 40s). There are several works of art in this church which include the painting of the dome and ceiling by of Rome and other paintings by . The titular statue of St. George is carved from solid wood by in 1841. The area over which the church is built is of considerable archaeological interest, with evidence of activity dating back to at least to the Roman period.

The parish celebrates two feasts during the year: , the official date celebrating the death of the martyr, and the third Sunday of July.