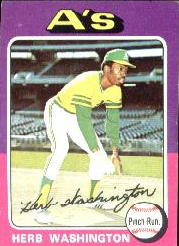 Herbert Lee (Hurricane Herb) Washington (born , in ) became one of the world's most celebrated sprinters as a student-athlete at and .

Washington first caught the attention of sports fans when he was enrolled at Michigan State. The four-time all-American won one NCAA title, seven Big Ten titles, and tied or broke the world record in the 50- and 60-yard dashes several times.

In by|1974, Washington was tapped by Oakland owner to become the A's "designated runner." Despite having no professional baseball experience, and having last played baseball in , Washington was a member of the Athletics championship team. His major league debut was on , against the Texas Rangers.

Appearing as a pinch-runner for in game two of the , Washington was picked off first base in a crucial ninth-inning situation by ' reliver Mike Marshall.

Washington played in 105 major league games without batting, pitching, or fielding, playing exclusively as a . He had 31 stolen bases in 48 attempts and scored 33 runs during his short career, numbers which were relatively low considering his great speed. He was released one month into the by|1975 season.

Washington's 1975 Topps baseball card (pictured above) is the only baseball card ever released that uses the "pinch runner" position label.

Following his baseball career, Washington joined the pro track circuit and remained in competition until 1976. Today he is a successful businessman, owning several franchises in the and , Ohio areas, in addition to a recent acquisition in Western .

In the late 1990s, he purchased all the Youngstown, Ohio area McDonald's franchises from Sam Covelli, once the largest franchise owner in the . In 2006, he added another McDonalds to his holdings, purchasing a Greenville, Pennsylvania McDonalds from an independent owner.

In 2005, he became the owner of the minor league hockey franchise, which plays in the in Youngstown, Ohio. The following year, he sold several of his Youngstown-area McDonald's franchises to John Perdue, who turned them into 24/7 operations.

Washington currently resides in the Youngstown suburb of with his wife and children.

*Washington was actually the second of six players that Finley's Athletics used as a pinch-running specialist during the 1970's. Of those 6, however, Washington was the only player who served exclusively as a pinch runner; the others played the field and batted at some point during their tenures. Before Washington was released in 1975, Oakland actually had three such players on the roster at the same time.
*Washington's cousin, , was an all-Big Ten at the and played five seasons in the .