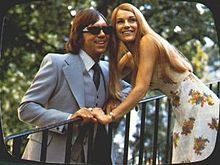 An uncle of Rolling Stones' drummer Charlie Watts, Lennie Peters (born Leonard George Sargent, 22 November 1931, London) was blinded in one eye during a car accident when he was five years old. A thrown brick blinded his other eye when he was sixteen. Before Peters and Lee he was a pianist playing the London pub scene. He recorded two singles on the Oreol label, "Let the Tears Begin" and "And My Heart Cried" in 1963 and 1964 respectively. In 1966 he recorded "Stranger in Paradise" for Pye Records and then "Here We Go Again" on the Gemini label in 1970. The latter he would revisit as Peters and Lee in 1976. He teamed up with actress and dancer Dianne Lee (born Dianne Littlehales, February 1950,, Sheffield, Yorkshire, England) in 1970. Lee would provide backing vocals for Peters' solo act. She was also at the time part of a dance act with her cousin Liz.

Their original act was called Lennie Peters and Melody until their manager suggested the name Peters and Lee. Their first performance was with Rolf Harris on 30 April 1970 at a concert in Bournemouth.

They entered the TV talent show Opportunity Knocks, which they won for a then record of seven times with such songs as "All Change Places", "I'm Confessin'", "Let It Be Me" and "All I Ever Need is You". Following their TV success, a record contract was soon signed with Philips Records. This quickly led to a number one hit, "Welcome Home". A successful first album, "We Can Make It", followed. This also reached the number one position, selling over 250,000 copies.

The duo were top of the bill at the Royal Variety Performance in 1973.[1] They were also resident guest stars on The Des O'Connor Show,[2] had slots on Golden Shot, Mike and Bernie Winters' Show, Presenting Nana Mouskouri, Seaside Special and David Nixon's show.

Peters and Lee had a popular TV series of their own Meet Peters and Lee,[3] including several Christmas specials made by ATV. "The Peters and Lee Story" was one Christmas special made for December 27 1975 which starred Mike and Bernie Winters, Cleo Lane and Aiden J Harvey who won New Faces in 1974. Their success made them household names and frequent appearances on Top of the Pops also kept their record sales steady.

Their last TV appearance before their split was London Night Out in November 1980, in which they performed four songs from their farewell album.

Lee went on to perform mainly in theatre and acting roles, whilst Peters pursued a solo singing career. He recorded his only solo album Unforgettable in 1981 and released three singles, "Record of My Love" in 1981, "Why Me" for Christmas 1982 and "Key Largo" in 1985. Peters also appeared on a few small TV slots, but without a huge success. Despite their fame, neither Peters nor Lee could repeat the success they enjoyed whilst together.

The pair reunited in 1986 with a new single, "Familiar Feelings", to perform on the nostalgia circuit. They also made some TV appearances, performing their new single. The duo went on to record two new albums, one in 1989 and the last in 1992 for their 21st anniversary, before Peters' death from bone cancer in 1992. Their final TV appearance was Pebble Mill in February 1992 with a short interview and a performance of the hit "Hey Mister Music Man". Sporting a broken arm, Peters' illness was apparent. Lee went on to marry Rick Price of Wizzard and recorded a solo album Chemistry in 1994. She continues to tour with Price as a duo, performing hits and new material.

Peters and Lee recorded two albums in the US, one being Smile, which included a new recording of their hit "Welcome Home". The album achieved a brief time in the US Billboard charts.