Rosie and the Originals

Rosie and the Originals 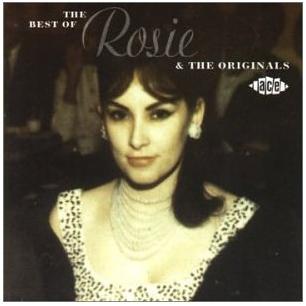 Rosie and the Originals were a 1960s best known for their single, "Angel Baby." Fronted by lead Rosie Hamlin, the group produced two singles (including "Angel Baby") for and, like many other artists of the , ended up in protracted legal battles with their over and credits.

Rosie Hamlin wrote the for "Angel Baby" as a poem when she was 14 years old, still attending in San Diego, .Fact|date=June 2007 When she was 15, she and some friends rented a in to record the song. The resulting record had a very simplistic sound, and, in fact, was eventually slightly damaged from excessive playing, so the group was unable to find a record label to distribute it.Fact|date=June 2007 Finally, bringing the master to a , they convinced a manager to play it in the listening booth of the store's music department.Fact|date=June 2007 The song received positive reactions from teenage listeners, and a scout from offered the group a , under the condition that the company take possession of the master recording, and that David Ponci be named as the author of the song, as he was the eldest member of the group.

"Angel Baby" made its debut in December 1960, before the group had even received their contract. When the contract finally came, Hamlin found that she was ineligible to collect record from the song because she was not listed as the . This led to the group's break-up, and although Hamlin secured the to her music in 1961, decades of battles over royalties followed.

After leaving Highland Records, Hamlin recorded a full-length album with Noah Tafolla for and toured with the label's other artists.

Hamlin and Tafolla married and had two children together, and in 1963, she retired from singing to spend time with her family. She returned to record singles in 1969 and again in 1973, performing occasionally throughout the 1970s and 1980s and more regularly throughout the 1990s and 2000s. In a 1969 interview with Life magazine, named Hamlin as one of his favorite singers, and he recorded a version of "" in the mid-1970s.