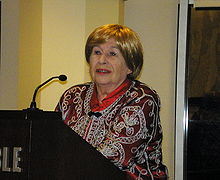 Marion Chesney (Marion McChesney) (born 1936) is a popular and prolific author. She has written numerous successful historical romance novels under her own name, including the Travelling Matchmaker and Daughters of Mannerling series. Using the pseudonym M. C. Beaton, she has also written many popular mystery novels, most notably the Agatha Raisin and Hamish Macbeth mystery series. She has also written under the pseudonyms Sarah Chester, Helen Crampton, Ann Fairfax, Marion Gibbons, Jennie Tremaine and Charlotte Ward.

Writing as Marion Chesney, her most recent endeavour is an Edwardian mystery series featuring Lady Rose Summer, a charming debutante with an independent streak, and Captain Harry Cathcart, an impoverished aristocrat. In a recent interview, Beaton stated that she has ceased writing the Edwardian series due to the pressure of writing for the Agatha Raisin and Hamish Macbeth series.[citation needed]

Marion Chesney was born in Glasgow, Scotland, and has worked as a buyer of fiction for a Glasgow bookshop, theatre critic, newspaper reporter and editor. She has a cottage in the Cotswolds.