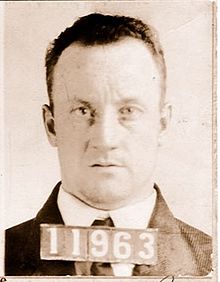 John "Red" Hamilton (1899 - April 30, 1934[1]) was a Canadian criminal and bank robber active in the early 20th century, most notably as a criminal associate of John Dillinger.

Little is known of John Hamilton's life prior to his criminal career. On March 16, 1927, he was convicted of the robbery of a gas station in St. Joseph, Indiana, and sentenced to 25 years. While incarcerated in Indiana State Prison in Michigan City, Hamilton befriended a number of prominent bank robbers, such as John Dillinger, Russell Clark, Charles Makley, Harry Pierpont and Homer Van Meter.[2][3]

Dillinger was paroled in May 1933, but swore to liberate his friends, and had handguns smuggled in to Hamilton, Makley, Pierpont, Clark and several other convicts. On September 26, 1933, a total of ten armed men, including Hamilton, escaped from the main gate of Indiana State Prison.[4]

Soon afterwards the gang learned that Dillinger had in the meantime been arrested for bank robbery and was being detained at the Allen County jail in Lima, Ohio. Determined to free Dillinger, the gang needed cash to fund an escape. On October 3, 1933, the gang robbed the First National Bank of St. Mary's, Ohio, escaping with $14,000.[5]

Nine days later, Hamilton accompanied Charles Makley, Harry Pierpont, Russell Clark and Ed Shouse to the Lima jail where Dillinger was being held, although he did not enter the building, and did not participate in Makley and Pierpont's murder of Ohio Sheriff Jesse Sarber.

On December 13, 1933, Hamilton and several other gangsters executed an armed invasion of a Chicago bank, to empty its safe deposit boxes, netting the gang as much as $50,000. A day later, after Hamilton had left his car at a Chicago garage for some body work, the garage's mechanic called police with his suspicion that it was a "gangster car". When Hamilton returned to pick up the car and found Sergeant William Shanley and two other officers waiting to question him, he opened fire, killing Shanley, and managing to elude capture by the other two officers.[6]

On January 15, 1934, Hamilton, Dillinger and Harry Pierpont robbed a bank in East Chicago, Indiana, for $20,376. During the heist, Indiana Patrolman William O'Malley was shot dead. Dillinger was officially charged with the murder, but several witnesses indicated that Hamilton was the shooter. By the end of the year, Hamilton found himself ranked third on Indiana's list of "public enemies", after Dillinger and Harry Pierpont.[2]

Hamilton, himself shot in during the East Chicago robbery, was left in the care of underworld physician Joseph Moran, while Dillinger and the others headed to Tucson, where they were apprehended by the authorities. After this incident, for a short time, Hamilton was at the top of the public enemies list, until Dillinger managed to escape yet again, and mustered a new gang that consisted of Hamilton, Homer Van Meter, Tommy Carroll, Eddie Green, and Baby Face Nelson.[2]

Hamilton subsequently accompanied the gang on a string of lucrative but chaotic armed robberies. During a bank heist in Mason City, Iowa, Hamilton was wounded yet again, even though he had been wearing a bulletproof vest. Now the subjects of a massive manhunt and media campaign, Hamilton and Dillinger made a discreet visit to Hamilton's sister's home in Sault Sainte Marie, Michigan, on April 17. After returning to Chicago, the gang retreated to the Little Bohemia resort near Rhinelander, Wisconsin. On April 22, the place was raided by the FBI under the direction of Melvin Purvis, who had received a tip about the gang's whereabouts. One civilian was killed, and two wounded.[2] The gang, following an escape plan it had mapped out days before, escaped entirely.[7]

Death and rumors of survival

A day later, on April 23, Hamilton, Dillinger and Homer Van Meter were again confronted by authorities in Hastings, Minnesota, and another shootout ensued. Hamilton was mortally wounded by a bullet as he and the rest of the gang escaped in a car. The gang again took him to see doctor Joseph Moran in Chicago. For some reason, Moran refused to treat Hamilton. Dillinger then hid the dying Hamilton with Volney Davis and Edna Murray in Aurora, Illinois. Hamilton reportedly died on April 30, 1934. Dillinger and Davis buried their friend, and Dillinger reportedly covered Hamilton's face and hands with lye, to hinder any later attempt to identify the body.[2]

Not yet knowing that Hamilton had died almost three weeks prior, authorities indicted him on May 19 of harboring fugitives. Hamilton's sister was convicted of the same charge, and spent a short time in prison. Hamilton's grave was discovered on August 28, 1935, the body identified from Hamilton's prison dental records.[2]

There were at the time several persistent rumors that Hamilton was actually still alive. The FBI received numerous tips from people claiming to have seen or heard from Hamilton. Even Hamilton's nephew maintained that he had personally visited his uncle in Canada since his supposed death.[2]

Nevertheless, no hard evidence for Hamilton's survival has ever been discovered save for the amalgam restorations done on his teeth. These were compared with his dental records from Indiana state penitentiary.