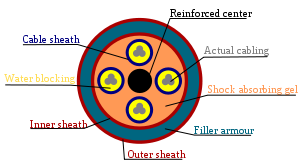 Direct-buried cable (DBC) is a kind of communications or transmissions cable which is especially designed to be buried under the ground without any kind of extra covering, sheathing, or piping to protect it.[1]

Most direct-buried cable is built to specific tolerances to heat, moisture, conductivity, and soil acidity. Unlike standard telecommunications and power cables, which have only a thin layer of insulation and a waterproof outer cover, DBC consists of multiple layers of heavy metallic-banded sheathing, reinforced by heavy rubber covers, shock absorbing gel, wrapped thread-fortified waterproof tape, and stiffened by a heavy metal core.

Most cable of this kind is coaxial or bundled fiber-optic in nature. Direct-buried cable is cheaper and easier to lay than other kinds of cable that require protection from the earth.[1] However, DBC is also easily cut during digging or other excavations. As a result, most direct-buried cable is found on side roads, not main thoroughfares.[2]

DBC is preferable in some areas since it is more resistant to being the focus of lightning discharges.[3]

Some power cabling is also direct-buried. This kind of cabling must follow strict regulatory procedures regarding installation and backfilling. This is usually used in areas where overhead cabling is impractical or dangerous.