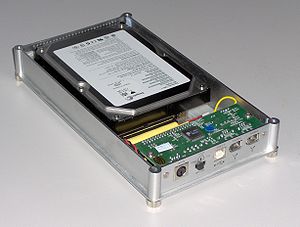 A disk enclosure is essentially a specialized chassis designed to hold and power disk drives while providing a mechanism to allow them to communicate to one or more separate computers. Drive enclosures provide power to the drives therein and convert the data sent across their native data bus into a format usable by an external connection on the computer to which it is connected. In some cases, the conversion is as trivial as carrying a signal between different connector types. In others, it is so complicated as to require a separate embedded system to retransmit data over connector and signal of a different standard. Factory-assembled external hard disk drives, external DVD-ROM drives, and others are all built around disk enclosures. Bulkier models built around 2.5" and 3.5" hard drives and full-height 5.25" DVD-ROM drives use enclosures that are often nearly identical to OEM enclosures. 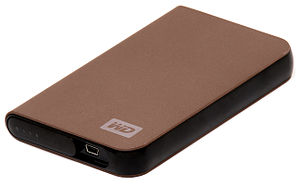 An external hard drive enclosure that uses a 2.5" drive and a USB connection for power and transfer

These may also be referred to as a caddy – a sheath, typically plastic or metallic, within which a hard disk drive can be placed and connected with the same type of adapters as a conventional motherboard and power supply would use. The exterior of the caddy typically has two female sockets, used for data transfer and power. 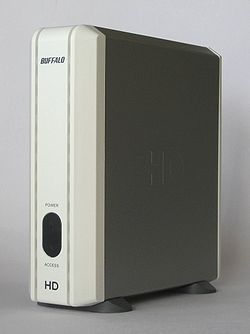 A range of other form factors has emerged for mobile devices. While laptop hard drives are today generally of the 9.5 mm high variant of the "2.5 inch" drive form factor, older laptops and notebooks had hard drives that varied in height, which can make it difficult to find a well-fitting chassis. Laptop optical drives require "slim" 5.25" enclosures, since they have approximately half the thickness of their desktop counterparts, and most models use a special 50-pin connector that differs from the 40-pin connectors used on desktop ATA drives.

While they are less common now than they once were, it is also possible to purchase a drive chassis and mount that will convert a 3.5" hard drive into a removable hard disk that can be plugged into and removed from a mounting bracket permanently installed in a desktop PC case. The mounting bracket carries the data bus and power connections over a proprietary connector, and converts back into the drive's native data bus format and power connections inside the drive's chassis.

In enterprise storage the term refers to a larger physical chassis. The term can be used both in reference to network-attached storage[5] and components of a storage area network or be used to describe a chassis directly attached to one or more servers over an external bus. Like their conventional server brethren, these devices may include a backplane, temperature sensors, enclosure management devices, and redundant power supplies.

An eSATA and Mini USB hard disk enclosure board

Multiple connectors including external power on a 2.5 inch enclosure

The PCB of an enclosure controls the data transfer, generic mass storage device firmware is readily available on most operating systems

SCSI, SAS, Fibre Channel, eSATAp, and eSATA interfaces can be used to directly connect the external hard drive to an internal host adapter, without the need for any intervening controller. External variants of these native drive protocols are extremely similar to the internal protocols, but are often expanded to carry power (such as eSATAp and the SCSI Single Connector Attachment) and to use a more durable physical connector. A host adapter with external port may be necessary to connect a drive, if a computer lacks an available external port.

USB or FireWire connections are typically used to attach consumer class external hard drives to a computer. Unlike SCSI, eSATA, or SAS these require circuitry to convert the hard disk's native signal to the appropriate protocol. Parallel ATA and internal Serial ATA hard disks are frequently connected to such chassis because nearly all computers on the market today have USB or FireWire ports, and these chassis are inexpensive and easy to find.

iSCSI, NFS, or CIFS are all commonly used protocols that are used to allow an external hard drive to use a network to send data to a computer system. This type of external hard drive is also known as Network-attached storage or NAS. Often, such drives are embedded computers running operating systems such as Linux or VxWorks that use their NFS daemons and SAMBA to provide a networked file system. A newer technology NAS, has been applied to some disk enclosures, which allows network ability, direct connection (e.g. USB) and even RAID features.