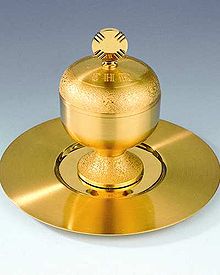 Gold vessel for chrism. The vessel is etched with the letters S.C. for sanctum chrisma.

Chrism (Greek word literally meaning "an anointing"), also called "Myrrh" (Myron), Holy anointing oil, or "Consecrated Oil", is a consecrated oil used in the Roman Catholic, Eastern Orthodox, Eastern Rite Catholic, Oriental Orthodox, in the Assyrian Church of the East, and in Old-Catholic churches, as well as Anglican churches in the administration of certain sacraments and ecclesiastical functions.

Pure or scented olive oil, although typically not called chrism today, has been called chrism in the past, including oil used by Protestants in some forms of Baptism, Confirmation, Anointing of the Sick and foot washing. In The Church of Jesus Christ of Latter-day Saints (LDS Church), consecrated oil is used in some ordinances. 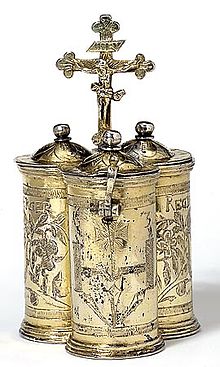 Multiple early Christian documents discuss the "ordinance" or "several ceremonies...explained in the Apostolical Constitutions" of "chrism", including documents by Theophilus (d. 181) and Tertullian (d. 220). Pope Fabian who reigned from AD 236-250 wrote that in the context of the Last Supper on Thursday evening, Christ taught His Apostles in what way they were to prepare the Holy Chrism: "Our predecessors received from the Apostles and delivered to us that our Saviour Jesus Christ, after having made the Last Supper with his Apostles and washed their feet, taught them how to prepare the Holy Chrism."[2]

The most detailed version of the practice is by Cyril of Jerusalem who details how ointment or oil was "symbolically applied to the forehead, and the other organs of sense" and that the "ears, nostrils, and breast were each to be anointed." Cyril states that the "ointment is the seal of the covenants" of baptism and God’s promises to the Christian who is anointed. Cyril taught that being "anointed with the Holy anointing oil [Chrism] of God" was the sign of a Christian (Christos means "anointed"), and a physical representation of having the Gift of the Holy Spirit (Holy Ghost), and it retains this meaning in Catholicism and Orthodoxy today. He says, "Having been counted worthy of this Holy Chrism, ye are called Christians, verifying the name also by your new birth. For before you were deemed worthy of this grace, ye had properly no right to this title, but were advancing on your way towards being Christians."(On the Mysteries 3.5)[3]

χρίσμα came into Latin as chrisma, into Old French, by contamination with Latin cramum "cream" as cresme (Modern French crème) and finally into English, in the 14th century as creme, spelled cream with the Great Vowel Shift from the 15th century (crème as a dessert ingredient was re-borrowed in the 19th century). Chrism was loaned into English earlier, in the 11th century as crism, spelled with ch- from the 16th century.

Glass ambry containing vessels for holy oil: chrism, oil of catechumens, and the for the anointing of the sick. 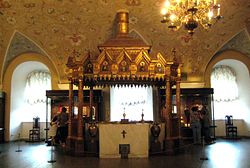 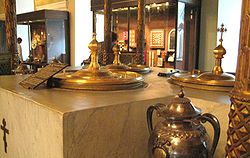 Stove for preparation of Chrism, detail.

Chrism is essential for the Catholic Sacrament of Confirmation/Chrismation, and is prominently used in the sacraments of Baptism and Holy Orders. Those to be confirmed or chrismated, after receiving the laying on of hands, are anointed on the head by the bishop or priest. In baptism, if the person baptized is not to be immediately confirmed or chrismated, the minister anoints them with chrism. Newly ordained priests are anointed with chrism on the palms of their hands, and newly ordained bishops receive an anointing of chrism on their foreheads. It is also used in the consecration of objects such as churches and altars.

In former times, chrism was used to consecrate patens and chalices as well. The Sign of the Cross would be made with the chrism on the interior parts the chalice and paten where the Eucharist would rest; the Cross would then be smeared to cover the entire interior parts. The chalice and paten would need to be consecrated with the chrism again if they were re-gilded. This ritual could only be performed by a Bishop or a priest with the faculties to do so. However, this is no longer the practice, and currently a simple blessing by a priest suffices.

Chrism is made of olive oil and is scented with a sweet perfume, usually balsam. Under normal circumstances, chrism is consecrated by the bishop of the particular church in the presence of the presbyterium at the Mass of the Chrism, which takes place in the morning of Holy Thursday. The oil of catechumens and the oil of the sick are also blessed at this Mass.

These holy oils are usually stored in special vessels known as chrismaria and kept in a cabinet known as an ambry. When the oils are distributed to a priest for him to use in his ministry they are kept in a smaller vessel with three compartments, known as an "oil stock". There is also a type of oil stock that is shaped like a ring, to make the anointing easier. The "jewel" of the ring is a container with a removable lid.

Chrismarium used in Russia before the revolution of 1917. The vessel is named "Alabaster" in reference to Matthew 26:7.

The primary use of chrism in the Oriental Orthodox, Eastern Orthodox, and Eastern Catholic Churches as well as in the Assyrian Church of the East, is for Chrismation, which under normal circumstances always immediately follows Baptism, even for infants. Here the blessing of the bishop upon the chrism functions as a substitute for the direct imposition of hands, and chrism is normally used even when the bishop is performing the baptism himself. Its other notable modern use is in the consecration of church buildings, where it is used to anoint the walls and the altar table. Formerly, emperors and kings of monarchies where Orthodoxy was the state religion would be anointed with chrism at their coronations.

Chrism is made during Holy Week beginning on Holy Monday and culminating in the Divine Liturgy on Holy Thursday when it is carried in the Great Entrance and placed upon the altar. It is primarily olive oil with the addition of a range of aromatic essences, patterned after the anointing oil described in Exodus 30:22-33. It can only be consecrated by an autocephalous church. The service is performed by the primate of the Church (e.g. Patriarch) or by other bishop which is specially appointed by him. On completion, chrism is distributed to all the bishops, who, in turn, give it to their parishes when needed. It is not made on an yearly basis, but only when supplies run short.

At the Patriarchate of Constantinople the chrism is produced roughly once every 10 years. It is made according to an ancient formula of the Jewish prophets and patriarchs that calls for 64 ingredients,[4] while the flame needed to boil the mixture during the preparation is made by burning old and disfigured icons.[5] The preparation of the Chrism in the Patriarchate is carried out by the college of the Kosmētores Myrepsoí (Greek: Κοσμήτορες Μυρεψοί, "Deans Perfumers"), presided by the Árchōn Myrepsós, the "Lord Perfumer". The incumbent Archon Myrepsos is biochemist Prodromos Thanasoglou.

In Byzantine times the official responsible was the Grand Sacristan of the Patriarchate, but since then the specific office of the Archon Myrepsos was created. Laity are not allowed to handle either the Chrism or the vessels containing it, therefore the Myrepsoi undergo a sort of "temporary ordination" into the clergy and are given by the Patriarch a gold "Cross of Ministry" to hang from their necks for the duration of their four-day service. The Archon is given the Lention, a silk "towel" or apron. Three copper cauldrons are used for the preparation: the largest contains olive oil, the smallest contains water and the aromatic ingredients and the middle contains wine, which allows the oil to boil without catching fire. The preparation involves several steps, and some, such as the addition of musk and rose oil, are performed by the Patriarch himself. Once the Chrism is filtered and ready, it is consecrated for the final time and stored in silver vessels in the Chapel of Saint Andrew, pending distribution.

The primary use of chrism in Anglican and Lutheran churches is for the Rite of Chrismation, which may be included as a part of Baptism, even for infants.

The oil of chrism is also commonly used in Confirmation, although this practice is not followed by churches of these denominations that are in the evangelical tradition. Owing to this difference of practice, it is common for Anglican and Lutheran confirmation liturgies to refer to the use of chrism as an option. The liturgy of the Church of England states "Oil mixed with fragrant spices (traditionally called chrism), expressing the blessings of the messianic era and the richness of the Holy Spirit, may be used to accompany the confirmation".[6] The confirmation liturgy of the Anglican Province of Southern Africa includes the rubric "The Bishop may sign them on the forehead, using at his discretion the Chrism".[7] The liturgy of the Igreja Lusitana (Anglican Church in Portugal) states at the point of confirmation "Os confirmandos ajoelham perante o Bispo. Este pode assinala-los na testa com o sinal da cruz, usando oleo proprio" ("The confirmands kneel before the Bishop. He may sign them on the forehead with the sign of the cross, using the proper oil").[8]

The use of chrism in Anglican and Lutheran ordination liturgies is similarly presented as an option in most provinces. In the liturgy for the ordination of priests in the Church of England, for example, the instruction is: "The bishop may anoint the palms of the hands of each newly ordained priest, saying 'May God, who anointed the Christ with the Holy Spirit at his baptism, anoint and empower you to reconcile and bless his people'."[9] There is a similar instruction for the ordination of Bishops, although they are anointed on the head, rather than the palms of the hands.[10]

Its other notable use is in the consecration of church buildings, where it may be used to anoint the walls, the altar/table, and the place for reservation of the Eucharistic sacrament for the sick.

As in other traditions, chrism is usually olive oil (although other plant oils can be used in cases when olive oil is unavailable) and is scented with a sweet perfume, usually balsam. Under usual circumstances, chrism is consecrated by the bishop of the particular church in the presence of the presbyterium at the Chrism Eucharist, which takes place on Maundy Thursday or a day shortly before, where priestly ordination vows are often renewed also. The oil of catechumens and the oil of the sick are usually also consecrated at this liturgy. Practices vary for the blessing of the chrism, from interpolations within the Eucharistic Prayer, to specific prayers of consecration, used at the discretion of the minister. Some Lutheran and Anglican liturgical books, however, make provision for a pastor who is not a bishop (a presbyter) to consecrate chrism in time of need and in the absence of the bishop.

Members of The Church of Jesus Christ of Latter-day Saints (Mormon or LDS Church) who hold the Melchizedek priesthood may use consecrated oil in performing the ordinance of blessing of the "sick or afflicted", though oil is not required if it is unavailable. The priesthood holder anoints the recipient's head with a drop of oil, then lays hands upon that head and declare their act of anointing. Then another priesthood holder joins in, if available, and pronounces a "sealing" of the anointing and other words of blessing, as he feels inspired. Melchizedek priesthood holders are also authorized to consecrate any pure olive oil and often carry a personal supply in case they have need to perform a blessing. Oil is not used in other blessings, such as for people seeking comfort or counsel.[11]

Prior to January 16, 2005, a nearly identical procedure to that described by Cyril in his On the Mysteries. III: Lecture XXI On Chrism was performed in Latter-day Saint temples. A modified version of the ordinance is still performed. See Washing and anointing.