Born in Peoria, Illinois, Donlin's family soon moved to Erie, Pennsylvania where he lost both parents in a bridge collapse when he was a young boy. He later made his way out to California and was playing for the Santa Cruz Sandcrabs in 1899 when he was acquired by the St. Louis Perfectos. Despite not joining the team until mid-July, he finished 10th in the National League in home runs and batted .323. The following season he hit .326 and finished 3rd in home runs with 10 while only playing in about half of St. Louis' games. On a team full of good hitters, Donlin found it difficult to get regular playing time because of his poor defense and decided to jump to the Baltimore Orioles of the new American League in 1901 to play for his former teammate in St. Louis, John McGraw.

"Turkey Mike", nicknamed because of his gait while walking, found the new team and league to his liking, hitting .340 which was good for 2nd in the league and appeared to be headed for greatness. But in March of 1902, he was sentenced to six months in prison for his actions during a drinking binge and was promptly released by the Orioles. After serving his time, Donlin was picked up by the Cincinnati Reds and hit .287 for them in the last month of the season. He seemed to have found a home back in his native midwest as he exploded in 1903, finishing 3rd in the league in hitting at .351 and placed in the top 5 in the National League in virtually every offensive category.

1904 found Donlin once again destroying the league offensively, hitting .356 when he had another drunken episode in St. Louis. The Reds first suspended him for 30 days and then traded him to New York, where he was once again reunited with John McGraw who was now managing the Giants. Donlin finished out the '04 season hitting a respectable .280 after the trade and helping the Giants to win the National League pennant. His combined batting average for 1904 ended up at .329, good enough for 2nd in the league for the second time in the career of the 26 year old.

Donlin followed up with the best season of his career in 1905. Playing a full season for the first time, his electrifying bat more than made up for his continued defensive shortcomings. Donlin hit .356, good for third in the National League, and led the league in runs scored as well as finishing in the top 5 in several other batting categories. He led the Giants to the World Series where he hit .263 and scored 4 runs in 5 games as the Giants defeated the Philadelphia Athletics for their first World Series Championship. 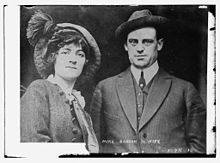 Mike Donlin and his wife, Mabel Hite, around 1910.

On April 11, 1906, Donlin was married to Mabel Hite, a vaudeville and Broadway actress. Donlin appeared to have finally settled down and ready to reach the stardom destined for him. Tragedy struck early in the 1906 season, however, as he broke his ankle sliding into second base and was lost for the remainder of the season. Cocky and brash as ever, Donlin demanded his same salary for the 1907 season as well as a $600 bonus incentive for staying sober throughout the year. When Giant owner John T. Brush refused, Donlin retired and sat out the entire 1907 season. Donlin spent the time traveling with his wife and became interested in the theater and the high-society lifestyle that came with it.

Donlin returned to the Giants for the 1908 season without showing any effects from a year-long layoff as he hit .334 and finished 2nd in the league in hitting for the 3rd time in his career. In his first home game back, he hit a game-winning 2-run home run in the bottom of the 9th inning. He was also near the league leaders in virtually every other offensive category and turned in an adequate job defensively for the first time.

On October 26, 1908, Donlin made his stage debut in Stealing Home, a one-act play written by Donlin and Hite. Although the reviews for Donlin were mixed, critics raved over his wife's performance and the show became a smash hit. Claiming he made more money from his play, Donlin left baseball and vowed never to return.

After 3 successful years, the play's popularity diminished and with Hite not able to land any successful roles, Donlin did return to the game in 1911 to his old team and manager, John McGraw. Donlin's talents had declined and was no longer worth the problems he created and was sold to the Boston Rustlers, having only played 12 games for his former New York team. Boston immediately inserted him into their starting line-up and Donlin responded to hit .315 for them.

Unwilling to negotiate with a hard-bargaining poor defensive outfielder on a poor team, Boston traded him to Pittsburgh, where he played the 1912 season as a reserve for the Pirates, batting .316. In the fall of 1912, Hite was diagnosed with cancer and died in October. In December Pittsburgh placed Donlin on waivers and he was claimed by the Philadelphia Phillies. Donlin refused to go and retired, once again, from baseball.

He had a change of heart and attempted a comeback late in 1913 with a minor league team in New Jersey and convinced his old friend, John McGraw, to select him to a traveling team that played overseas in the winter of 1913. Encouraged by his hitting, McGraw gave Donlin a roster spot on the 1914 Giants but the magic in his bat was gone. Hitting only .161 in 35 games, Donlin called it quits, this time for good. In October 1914 Donlin married actress Rita Ross, known for her part in the musical comedy team, Ross & Fenton.

"Turkey Mike" made the career change once again from baseball to acting, gradually switching from stage to screen. He had more success on the baseball field than in the entertainment industry, although he did appear in a number of movies in small roles, including the silent classic The General (1926). He was also retained as an advisor on a number of baseball movies. One of Donlin's great friends and drinking buddies was renowned actor John Barrymore. Donlin appeared in at least two of the actor's silent pictures, Raffles the Amateur Cracksman (1917) and The Sea Beast (1926).

Mike Donlin died of a heart attack at age 55 in Hollywood, California.