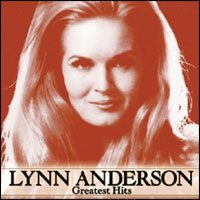 "Greatest Hits" is the name of an album showing all of /Pop artist, 's biggest hits. The album features all of Anderson's biggest hits. The album also includes her signature hit "Rose Garden", which also remains as her biggest hit. The album includes all her other hits from her 1970s heyday, like "Top of the World", "Cry" and "Keep Me In Mind". It also includes some of her early hits, like "If I Kiss You (Will You Go Away)" and "Big Girls Don't Cry". Even some of late 70s hits are included like "Wrap Your Love All Around Your Man" and "Isn't It Always Love"

This was the first Lynn Anderson collection to offer both her hits from her years at Chart records and her years at Columbia records.