The Carpal Tunnel of Love

The Carpal Tunnel of Love 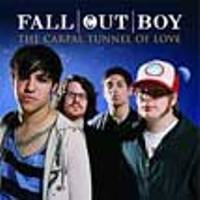 "The Carpal Tunnel of Love" is a song on the album, "". It was originally leaked online by the band, and later given to as a digital download before "Infinity on High" was released. In addition, a web-exclusive video was released, but later saw televised airplay on Music Choice On-Demand.

The song was not a true single release, but was simply given out early by the band to give fans a taste of the album. The first true single from the album was "".

Many fans consider this song to bear more resemblance to the band's earlier material than much of the "Infinity on High" album. The lyrics were influenced heavily by the writings of /Some Girls singer and lyricist , who sued the band for copyright infringement after the song was released. Eisold was credited in the album liner notes. Fall Out Boy settled out of court. [ [http://www.punknews.org/article/22623 Fall Out Boy borrows lyrics from American Nightmare] ]

*The song title is a combination of and the well known "Tunnel of Love" ride.

On , , the music video was made available on Fall Out Boy's website. Apart from the characters of "", the video also follows a plot where Cuddles and Giggles have fallen in love at first sight, and tells the story of Cuddles' attempts to express his love. However, Lumpy sits between them while they are waiting for the bus. Cuddles spots Toothy, who is cutting flowers in the shape of a heart. While Toothy is stung in the eye by a bee, Lumpy, who is being foiled by a , sneezes at the flowers and ceases them to be [citation needed] . As the bus arrives, Lumpy sits next to Giggles, and Cuddles is sitting alone. He tries to send a love letter to Giggles, but Lumpy uses it to remove the snot out of his nose and throws it out of the window. The paper gets stuck to Nutty, who drives behind the bus on a motorcycle. He hits a truck filled with iron shafts and dies.Meanwhile, the bus arrives at some kind of cafe, where Lumpy slams the door behind him when Toothy just wanted to enter. His eye gets stuck between the door and is removed from his head, into the cafe. Cuddles and Giggles finally manage to sit next to each other, but when they want to kiss each other, The Mole serves a slush between their mouths (Meanwhile, the Fall Out Boy band members enter the cafe). After drinking it for a while, they realize that Toothy's eye is inside. Cuddles desperately throws away the slush onto Lumpy, who gets in a shock and runs out of the cafe and accidentally kills Toothy by crushing him between the doors and the wall. Lumpy finds a breakdown lorry, and steals it, trying to run away. But he accidentally drives it backwards, hitting the cafe. The car's rope gets stuck to the cafe and tightens as Lumpy drives forward, slicing the Mole in two. The car drags the cafe with it, killing all the band members. Lumpy also gets stung by a bee, and loses control about the car. He hits the truck where Nutty died, and manages to stop the car, and thus the cafe. However, the rope is stuck to Lumpy's antler and tightens. Lumpy pushes the accelerator pedal, and sends some of the iron shafts into the air. Cuddles and Giggles, having survived until now, wish to kiss each other, but are both struck byt the same iron shaft. While Lumpy is decapitated, Giggles slowly slides down on the shaft to Cuddles. Their mouths touch each other, creating the intention that they kiss each other.In a manner typical of Happy Tree Friends, all the characters in the video including the Fall Out Boy members are killed in a graphic and ultraviolent manner. It was one of the only Happy Tree Friends clips where everyone dies.