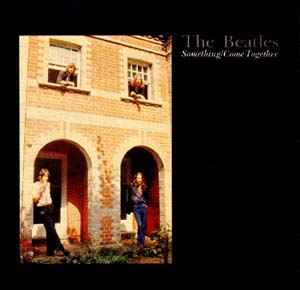 and —the two principal songwriting members of the band—both praised "Something" as among the best songs Harrison had written. As well as critical acclaim, the single achieved commercial success, topping the in the United States, and entering the top 10 in the United Kingdom. The song's success continued after the breakup of The Beatles, when it was covered by over 150 artists including , , , , , , becoming the second-most covered Beatles song after "Yesterday".

During the 1968 recording sessions for "The Beatles" (also referred to as the "White Album"), Harrison began working on a song that eventually became known as "Something." Initially based on the song "Something in the Way She Moves", the song's first lyrics ("Something in the way she moves/Attracts me like no other lover") were used as filler while the melody was being developed.

Harrison later said that "I had a break while Paul was doing some overdubbing so I went into an empty studio and began to write. That's really all there is to it, except the middle took some time to sort out. It didn't go on the "White Album" because we'd already finished all the tracks."

Harrison had cited other sources of inspiration. In a 1996 interview he responded to the question of whether the song was about Pattie: "Well no, I didn't [write it about her] . I just wrote it, and then somebody put together a video. And what they did was they went out and got some footage of me and Pattie, Paul and Linda, Ringo and Maureen, it was at that time, and John and Yoko and they just made up a little video to go with it. So then, everybody presumed I wrote it about Pattie, but actually, when I wrote it, I was thinking of ." [Paul Cashmere (1996). [http://abbeyrd.net/harrison.htm "George Harrison Gets "Undercover"] . Retrieved 1 January 2008.]

The original intention had been for Harrison to offer the song to , as had been done with the previous Harrison composition, "." When this fell through, the song was given to (who had previously covered The Beatles' ""); his version came out two months before that of The Beatles. During the "Get Back" recording sessions for what eventually became "", Harrison considered using "Something," but eventually decided against it due to his fear that insufficient care would be taken in its recording; his earlier suggestion of "" had not gone down well with the band. [Cross, Craig (2006). [http://www.beatles-discography.com/1969.html "Beatles History - 1969"] Dead link|url=http://www.beatles-discography.com/1969.html|date=October 2008. Retrieved 1 April 2006.] It was only during the recording sessions for "Abbey Road" that The Beatles began seriously working on "Something."

"Something" was recorded during the "Abbey Road" sessions. It took 52 takes in two main periods, the first session involved a demo take on Harrison's 26th birthday, 25 February 1969, followed by 13 backing track takes on 16 April. The second main session took 39 takes and started on 2 May 1969 when the main parts of the song were laid down in 36 takes, finishing on 15 August 1969 after several days of recording s. [ [http://www.norwegianwood.org/beatles/disko/uklp/abbey.htm norwegianwood.org] 1969: Abbey Road. retrieved 2 October 2008]

The original draft that the Beatles used lasted eight minutes, with on the towards the end (which was recorded later as Lennon was not present during the first few sessions). The middle also contained a small section in the draft. Both the counter-melody and Lennon's piano piece were cut from the final version. Still, Lennon's piano was not erased totally. Some bits can be heard in the middle eight, in particular the line played downwards the C major scale, i.e. the connection passage to George's guitar solo. The erased parts of Lennon's piano section later became the basis for Lennon's song "Remember."

"Abbey Road" was the only Beatles album mainly recorded on an 8-track tape machine, rather than the 4-track machines that were used for prior Beatle albums. This is noticeable in the better sound separation and mixing of the drum kit. EMI's conservative management had not yet approved the use of their then-new 8-track deck, and that accounts for why this was one of the rare Beatles albums to be recorded at three different studios (Trident, Olympic, and Abbey Road). The album was also the first to be recorded and mixed entirely on a solid state sound board, giving the album's sound a noticeably different "feel" from its predecessors; Harrison later remarked that the new sound was too "harsh" for his liking. Also, the is featured on the majority of tracks, not merely as a background effect, but sometimes playing a central role, as in "Because" where it's used for the middle 8. It is also prominent on "Maxwell's Silver Hammer" and "Here Comes the Sun". The instrument was introduced to the band by Harrison after a stay in Los Angeles where he was introduced to the instrument. (The first landmark pop song to employ the Moog was "" by .) Earlier in 1969, Harrison had released "", which featured dissonant sounds entirely made from a Moog, on Apple's short-lived experimental label Zapple.

One of the assistant engineers working on the album was a then-unknown . He went on to engineer 's landmark album "" and produce many popular albums himself with . John Kurlander also assisted on many of the sessions, and went on to become a successful engineer and producer, most noteworthy for his success on the scores for "The Lord of the Rings" film trilogy.

The lead vocalist for "Something" was . The song runs at a speed of about sixty-six and is in throughout. The begins in the key of . It continues in this key throughout the intro and the first two verses, until the eight-measure-long bridge, which is in the key of . After the bridge, the melody returns to C Major for the , the third verse, and the . [Pollack, Alan W. (1999). [http://www.icce.rug.nl/~soundscapes/DATABASES/AWP/s.html "Notes on 'Something' "] . Retrieved 30 March 2006.] Although The Beatles had initially attempted an edgier acoustic version of the song, this was dropped along with the counter-melody. A demo of the acoustic version with the counter-melody included was later released as part of "". On the final release, the counter-melody was replaced by an , and the song was given a softer tone with the introduction of a string arrangement by , The Beatles' producer.

The theme of the song is considered to be about doubt and uncertainty. [cite book | title= While My Guitar Gently Weeps: The Music of George Harrison | author= Leng, Simon | year= 2006 | publisher= Hal Leonard | isbn= 1-4234-0609-5 | url= http://books.google.co.uk/books?id=NRoFPFvI1joC&pg=PA41&dq=something+george+harrison&as_brr=3&ei=P-vkSNnFI4LwsQPKm5W-Dw&client=firefox-a&sig=ACfU3U2d2GNLPweZh1srzMHRNDQ0h2uebw#PPA41,M1 | pages = p. 41] One reviewer described it as "an unabashedly straightforward and sentimental love song" at a time "when most of the Beatles' songs were dealing with non-romantic topics or presenting cryptic and allusive lyrics even when they were writing about love".

A few days later on 6 October, "Something" was released as a double A-side single with "" in the United States, becoming the first Harrison composition to receive top billing on a Beatles single.

Although it began charting a week after its release on 18 October, doubts began to arise over the possibility of "Something" topping the American charts. It was the prevailing practice at the time to count sales and airplay of the A- and B-sides separately, which allowed for separate chart positions. With "Come Together" rivaling "Something" in popularity, it was hardly certain that either side of the single would reach number one. However, on 29 November, "Billboard" started factoring the combined performance of both A- and B-sides into their calculations, as one single. The result was that "Come Together/Something" topped the American charts for a week, before eventually falling out of the charts about two months later (on the concurrent singles chart, which continued to measure the performance on both sides of a single separately, "Something" peaked at number two while "Come Together" spent three weeks at number one). The single was certified Gold just three weeks after its initial release, but was not heard of again in terms of sales until 1999, when it was declared Platinum.

In the United Kingdom, "Something" came out on 31 October. It was the first Beatles single to have a Harrison song on the A-side, and it was also the first single to feature songs already available on an album.

Despite this, things were not going well for the band. Events happening at the same time as the recording of "Abbey Road" included the disagreement among the band members regarding using as a manager which would eventually lead to the group splitting up. [ [http://books.google.co.uk/books?id=HWuQu8EMDKcC&pg=PA326&dq=beatles+arguments+Abbey+Road&client=firefox-a&sig=ACfU3U2RgWD-QsZrWKm65FvfynpB_6VkDQ Google Books] Brian Roylance, Paul McCartney, John Lennon, George Harrison, Ringo Starr, "The Beatles Anthology" pp326, Chronicle Books (2000), ISBN 0811826848] In addition to this, their last album —"Let It Be"— comprised abandoned recordings from the "Get Back" sessions instead of any new work. By the time the promotional video for "Something" was being shot, the individual Beatles had drawn apart; the film consisted of separate clips of each Beatle walking around his home, accompanied by his wife, edited together. Shortly after the release of "Let It Be" in 1970, The Beatles announced their break-up.

In 2002, after Harrison's death, McCartney and performed "Something" at the . Their performance was nominated for the for Best Pop Collaboration with Vocals. [ [http://www.stuck-inside-a-cloud.net/CFGwinsGrammy.html "Grammy Win For 'The Concert For George' "] . Retrieved 2 April 2006.] McCartney also performed the song using just a on his "Back in The US" and "Back in the World" tours. The song was also performed as a tribute to Harrison by McCartney in 2008 at the Liverpool Sound Concert, where he performs the song in a similar fashion to that of the Concert for George, starting off with only a ukulele for accompaniment, then after the bridge, being joined by the full band to conclude the song similarly to that of the original recording. [ [http://www.dvdmg.com/mccartneybackinus.shtml Paul McCartney Back in the US DVD review] . Retrieved 22 February 2008.] [ [http://homepage.mac.com/paul_mccartney/backUS_2002/back.htm Back in the US tour fan page] . Retrieved 22 February 2008.] [ [http://homepage.mac.com/paul_mccartney/2003_tour/2003.htm#anchor2080153 Back in the World tour fan page] . Retrieved 22 February 2008.] likewise played the song live as a tribute to Harrison following his death. [ Pareles, Jon. [http://query.nytimes.com/gst/fullpage.html?res=9B0CE0D81530F935A25752C1A9649C8B63&n=Top%2FReference%2FTimes+Topics%2FPeople%2FD%2FDylan%2C+Bob "Dylan's After-Hours Side," "New York Times"] . Retrieved 28 February 2007.] [ [http://my.execpc.com/~billp61/2002s4.html Bob Dates Set Lists Fall 2002 Tour (13 November 2002)] Dead link|date=October 2008. Retrieved 28 February 2007.]

With more than 150 versions, "Something" is the second most covered Beatles song after "Yesterday". It began accumulating s from other artists, including , , , and even , who Harrison originally had in mind as the singer when he wrote "Something." Harrison nevertheless later said that his favourite cover versions were those of (B-Side of 45 Think ['73] /Something; Polydor PD-14185; 1973) and .

Frank Sinatra was particularly impressed with "Something;" calling it "the greatest love song ever written," he sang it hundreds of times at various s. However, he once made the comment that "Something" was his all-time favourite Lennon–McCartney song, [cite web|url=http://vegasblog.latimes.com/vegas/2006/12/sinatra_elvis_a.html |title=The Movable Buffet: Los Angeles Times |publisher=Vegasblog.latimes.com |date= |accessdate=2008-10-02] and frequently introduced it as a composition. Harrison did not appear to mind this, and instead borrowed an alteration to the lyric that Sinatra had made. Where the original song was "You stick around now it may show," Sinatra sang "You stick around, Jack, she might show." This change was adopted by Harrison, who used the same lyrics whenever he performed "Something" as part of his touring repertoire. [Marck, John T. (2006). [http://www.iamthebeatles.com/article1029.html "Oh Look Out! Part 12, Abbey Road"] . Retrieved 1 April 2006.]

In 1970, the same year the Beatles announced they had split, "Something" received the for Best Song Musically and Lyrically. [ [http://www.britishacademy.com/ivorsmenu/1970.htm "The Ivor Novello Awards for the Year 1970"] Dead link|date=October 2008. Retrieved 2 April 2006.] "Something" continues to garner accolades from the musical establishment years after its release, with the (BBC) website naming it as the 64th-greatest song ever. According to the BBC, "Something" shows more clearly than any other song in The Beatles canon that there were three great songwriters in the band rather than just two." The Beatles' official website itself said that "Something" "underlined the ascendancy of George Harrison as a major song writing force".

* [http://www.icce.rug.nl/~soundscapes/DATABASES/AWP/s.shtml Alan W. Pollack's analysis of "Something"]
* [http://www.beatlesbible.com/songs/something/ The Beatles Bible: Something]

Synonyms:
A thing (indefinitely) / A part, a portion / Somebody, a person of consequence / A thing, matter, affair, event