National Highway 17, commonly referred to as NH 17, now renamed as NH 66[1], is a busy National Highway in India that runs roughly north-south along the western coast of India, parallel to western ghats. It connects Panvel, near Mumbai to Kochi, passing through the states of Maharashtra, Goa, Karnataka, and Kerala. It is the 7th longest highway in India with 1,296 km (805 mi).

Prior to building of National Highway 17 ( NH-17 ) in 1960's and 1970s, Ships and steamers running between Mumbai and Mangalore calling at different ports were only means of transport along the west coast of India adjoining the Arabian sea. These ship services was abandoned later. The NH 17 connects the interior parts of coastal regions with rest of the country. The NH 17 connects the major sea ports of West India, Mumbai, JNPT at Nhava Sheva, Mormugao (MPT), New Mangalore (NMPT), International Container Transshipment Terminal, Kochi, Ratnagiri Port , Jindal jaigad port.

Hence this national highway 17 allows for movement of goods by trucks ( lorries ) from hinterland to major sea ports of India.The trade and commerce in the region has increased due to expansion of markets for agricultural and sea food produced in the region connected by this highway. The formation of NH-17 has led to development of tourism in the region connected by this highway. Goa state is classic example of this development. Many industries have been set up along National Highway 17 taking advantage of connectivity and proximity to sea ports on Arabian sea. The highway was the only source of connection between areas in the coastal districts, until the Konkan Railway was opened in 1998, between Mumbai and Mangalore.

Major Cities / Places on the Way 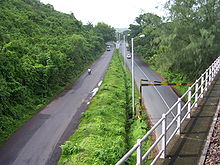 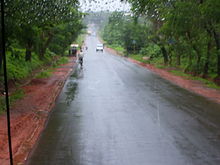 The NH 17 passes through hills, forests, rivers, rivulets, and streams, generally flowing westwards towards Arabian sea. Most of region has typical scene like coconut trees dotted all along with paddy fields and arecanut gardens. The road is uneven, bumps, curves, steep rises and narrow paths in between hillocks are found all over this highway. As this region experiences heavy rainfall, potholes are present occasionally.

Even though language spoken varies along the highway, food of the people along the NH 17 has some common ingredients like Coconut, Chilli, Pepper, Coconut oil, Fish etc. The region has higher literacy rate as compared to other regions of India. The building of National Highway 17 has led to rapid development of towns and cities along the highway.

As part of the rationalization of highway numbering, this highway is assigned with the number NH 66. The segment of NH-47 from Kochi to Kanyakumari is merged with this highway, making it end at the southernmost point of India.