The Ottawa Lynx were a minor league baseball team that formerly competed in the Triple-A International League (IL) from 1993 to 2007. The team's home field was Lynx Stadium in Ottawa, Ontario. Over the team's 15 seasons, it was the Triple-A Minor League affiliate of the Montreal Expos (1993–2002), Baltimore Orioles (2003–2006), and Philadelphia Phillies (2007). At the time, it was the only IL franchise based in Canada.

In late August 2006, the league approved the conditions to negotiate the sale of the team. The new owners moved the team to Allentown, Pennsylvania beginning with the 2008 season, where it is known as the Lehigh Valley IronPigs.[1] The team's move to Allentown, the third largest city in Pennsylvania, has brought it within the Phillies' fan base region.

During the club's last years, it had difficulty attracting fans, which was one of several factors in the decision to relocate the team.

The Canadian-American (Can-Am) League placed a team in Ottawa, called the Rapidz, for the 2008 season. On September 29, 2008, the Rapidz ceased operations as the team declared bankruptcy.[2] After the initial ownership declared bankruptcy, the Can-Am league assumed ownership of the franchise, but suspended the team's operations in March 2009 prior to what would have been a second season.

In 1991, Ottawa businessman and then Ottawa 67's owner Howard Darwin was successful in applying to the IL for an expansion franchise to begin play in 1993, at a cost of $5 million. The Lynx became the second IL franchise to play in Ottawa, after the former Ottawa Giants and Ottawa Athletics of the 1950s. The application was contingent on the City of Ottawa building a baseball stadium for the team. The stadium was completed in time for the 1993 season.

The Lynx began play in 1993, serving as the top farm team for the Montreal Expos. The team won the International League championship in 1995, the only time it would do so. During this period, the Lynx featured such future Major League Baseball players as Rondell White, Cliff Floyd, Matt Stairs, Kirk Rueter, and F.P. Santangelo. The Lynx eventually retired two numbers: Santangelo's 24, and Jamey Carroll's 3.

In 2000, Darwin sold his shares in the team to Ray Pecor for $7 million. According to news reports, Pecor would lose $1 million annually on the team due to low attendance.[3]

In 2003, the Lynx were not given any assurances from either the Montreal Expos or Major League Baseball on the long term future of the Expos. They became the Triple-A affiliate of the Baltimore Orioles on September 24, 2002.[4] As a result, Montreal shifted its affiliation to the Edmonton Trappers of the Pacific Coast League. 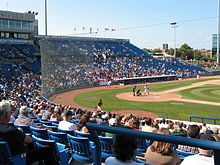 In 2006 the ball club was sold to Joe Finley and Craig Stein, while Pecor maintained a minority stake. Finley and Stein declared their intention to move the team to Allentown, Pennsylvania for the 2008 season, where a new stadium was set to begin construction that September (now built as Coca-Cola Park).[5][6] The owners, facing a lawsuit from the City of Ottawa if they moved the Lynx, filed a lawsuit against the City of Ottawa on October 17, 2006, seeking $10.75 million in damages claiming that the city failed to provide enough parking spaces, which, the team alleged, was a violation of its lease.[7]

The Lynx won the Governors' Cup, the championship of the International League, once in the team's history by defeating the Norfolk Tides in 1995.