Priming is an implicit memory effect in which exposure to a stimulus influences a response to a later stimulus. It can occur following perceptual, semantic, or conceptual stimulus repetition. For example, if a person reads a list of words including the word table, and is later asked to complete a word starting with tab, the probability that he or she will answer table is greater than if not so primed. Another example is if people see an incomplete sketch that they are unable to identify and they are shown more of the sketch until they recognize the picture, later they will identify the sketch at an earlier stage than was possible for them the first time.[1]

The effects of priming can be very salient and long lasting, even more so than simple recognition memory.[2] Unconscious priming effects can affect word choice on a word-stem completion test long after the words have been consciously forgotten.[2]

Positive priming is thought to be caused by spreading activation.[6] This means that the first stimulus activates parts of a particular representation or association in memory just before carrying out an action or task. The representation is already partially activated when the second stimulus is encountered, so less additional activation is needed for one to become consciously aware of it.

Negative priming is more difficult to explain. Many models have been hypothesized, but currently the most widely accepted are the distractor inhibition and episodic retrieval models.[5] In the distractor inhibition model, the activation of ignored stimuli is inhibited by the brain.[5] The episodic retrieval model hypothesizes that ignored items are flagged 'do-not-respond' by the brain. Later, when the brain acts to retrieve this information, the tag causes a conflict. The time taken to resolve this conflict causes negative priming.[5]

Conceptual priming is based on the meaning of a stimulus and is enhanced by semantic tasks. For example, table, will show priming effects on chair, because table and chair belong to the same category.[9]

Repetition, also called direct priming is a form of positive priming. When a stimulus is experienced, it is also primed. This means that later experiences of the stimulus will be processed more quickly by the brain.[10] This effect has been found on words in the lexical decision task.

In semantic priming, the prime and the target are from the same semantic category and share features.[11] For example, the word dog is a semantic prime for wolf, because the two are both similar animals. Semantic priming is theorized to work because of spreading neural networks.[6] When a person thinks of one item in a category, similar items are stimulated by the brain. Even if they are not words, morphemes can prime for complete words that include them.[12] An example of this would be that the morpheme 'psych' can prime for the word 'psychology'.

In associative priming, the target is a word that has a high probability of appearing with the prime, and is "associated" with it but not necessarily related in semantic features. dog is an associative prime for cat, since the words are closely associated and frequently appear together (in phrases like "raining cats and dogs").[13] A similar effect is known as context priming. Context priming works by using a context to speed up processing for stimuli that are likely to occur in that context. A useful application of this effect is reading written text.[14] The grammar and vocabulary of the sentence provide contextual clues for words that will occur later in the sentence. These later words are processed more quickly than if they had been read alone, and the effect is greater for more difficult or uncommon words.[14]

In the psychology of visual perception and motor control, the term Response Priming denotes a special form of visuomotor priming effect. The distinctive feature of response priming is that prime and target are presented in quick succession (typically, less than 100 milliseconds apart) and are coupled to identical or alternative motor responses.[15][16] When a speeded motor response is performed to classify the target stimulus, a prime immediately preceding the target can thus induce response conflicts when assigned to a different response as the target. These response conflicts have observable effects on motor behavior, leading to priming effects, e.g., in response times and error rates. A special property of response priming is its independence from visual awareness of the prime: For example, response priming effects can increase under conditions where visual awareness of the prime is decreasing.[17][18]

The masked priming paradigm has been widely used in the last two decades in order to investigate both orthographic and phonological activations during visual word recognition. The term "masked" refers to the fact that the prime word or pseudoword is masked by symbols such as ###### that can be presented in a forward manner (before the prime) or a backward manner (after the prime). These masks enable to diminish the visibility of the prime. The prime is usually presented less than 80 ms in this paradigm. In all, the short SOA (duration of prime presentation) associated with the masking make the masked priming paradigm a good tool to investigate automatic and irrepressive activations during visual word recognition.

Measuring the effects of priming

Priming effects can be found with many of the tests of implicit memory. Tests such as the word-stem completion task, and the word fragment completion task measure perceptual priming. In the word-stem completion task, participants are given a list of study words, and then asked to complete word "stems" consisting of 3 letters with the first word that comes to mind. A priming effect is observed when participants complete stems with words on the study list more often than with novel words. The word fragment completion task is similar, but instead of being given the stem of a word, participants are given a word with some letters missing. The lexical decision task can be used to demonstrate conceptual priming. In this task, participants are asked to determine if a given string is a word or a nonword. Priming is demonstrated when participants are quicker to respond to words that have been primed with semantically-related words, e.g., faster to confirm "nurse" as a word when it is preceded by "doctor" than when it is preceded by "butter". Other evidence has been found through brain imaging and studies from brain injured patients.

Amnesic patients are described as those who have suffered damage to their medial temporal lobe, resulting in the impairment of explicit recollection of everyday facts and events. Priming studies on amnesic patients have varying results, depending on both the type of priming test done, as well as the phrasing of the instructions.

Amnesic patients do as well on perceptual priming tasks as healthy patients,[19] however they show some difficulties completing conceptual priming tasks, depending on the specific test. For example, they perform normally on category instance production tasks, but show impaired priming on any task that involves answering general knowledge questions.[20][21]

Overall, studies from amnesic patients indicate that priming is controlled by a brain system separate from the medial temporal system that supports explicit memory.

Perhaps the first use of semantic priming in neurological patients was with stroke patients with aphasia. In one study, patients with Wernicke's aphasia who were unable to make semantic judgments showed evidence of semantic priming, while patient with Broca's aphasia who were able to make semantic judgments showed less consistent priming than Wernicke's aphasics or normal controls (Milberg and Blumstein 1981). This dissociation was extended to other linguistic categories such phonology and syntactic processing by Blumstein, Milberg and their colleagues.[citation needed]

Patients with Alzheimer's disease (AD), the most common form of dementia, have been studied extensively as far as priming goes. Results are conflicting in some cases, but overall, AD patients show decreased priming effects on word-stem completion and free association tasks, while retaining normal performance on lexical decision tasks.[23] These results suggest that AD patients are impaired in any sort of priming task that requires semantic processing of the stimuli, while priming tasks that require visuoperceptual interpretation of stimuli are unaffected by Alzheimers.

Patient J.P., who suffered a stroke in the left medial/temporal gyrus, resulting in word meaning deafness - the inability to comprehend spoken words, but maintaining the ability to read and write, and with no effects to hearing ability. J.P. showed normal perceptual priming, but his conceptual priming ability for spoken words was, expectedly, impaired.[24] Another patient, N.G., who suffered from prosopanomia (the inability to retrieve proper names) following damage the his left temporal lobe, was unable to spontaneously provide names of persons or cities, but was able to successfully complete a word-fragment completion exercise following priming with these names. This demonstrated intact perceptual priming abilities.[25] 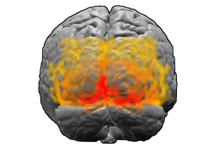 Priming while improving performance decreases neural processing in the cerebral cortex of sensory stimuli with stimulus repetition. This has been found in single-cell recordings[26] and in electroencephalography (EEG) upon gamma waves,[27] with PET [28] and functional MRI.[29] This reduction is due to representational sharpening in the early sensory areas which reduces the number of neurons representing the stimulus. This leads to a more selective activation of neurons representing objects in higher cognitive areas.[30]

Priming is thought to play a large part in the systems of stereotyping.[34] This is because attention to a response increases the frequency of that response, even if the attended response is undesired.[34][35] The attention given to these response or behaviours primes them for later activation.[34]

This can occur even if the subject is not conscious of the priming stimulus.[34] An example of this was done by Bargh et al. in 1996. Subjects were implicitly primed with words related to the stereotype of elderly people (example: Florida, forgetful, wrinkle). While the words did not explicitly mention speed or slowness, those who were primed with these words walked more slowly upon exiting the testing booth than those who were primed with neutral stimuli.[34] Similar effects were found with rude and polite stimuli: those primed with rude words were more likely to interrupt an investigator than those primed with neutral words, and those primed with polite words were the least likely to interrupt.[34] A Harvard study showed that something as simple as holding a hot or cold beverage before an interview could result in pleasant or negative opinion of the interviewer.[36]