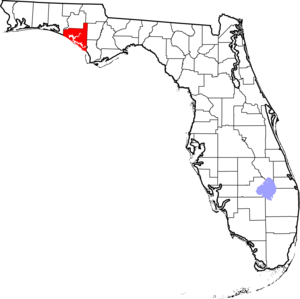 Bay County is best known for its white sand beaches and crystal blue water, where large pods of dolphins swim year-round. These beaches attract hundreds of thousands of visitors from all over the world each year.

On February 12, 1913, representatives from five towns on the St. Andrew’s Bay, met in Panama City to select a name for a proposed new county. The name Bay was selected because it was satisfactory to the majority of the citizens and was descriptive of the territory that would be included. On July 1, 1913, Bay County was created by the Legislature from portions of Washington, Calhoun and Walton counties.

It was the site of , which gave all persons accused of a crime the right to an attorney.