The Lord Mayor of Belfast is the leader and chairman of Belfast City Council, elected annually from and by the City's 51 councillors.

The Lord Mayor is Niall Ó Donnghaile of Sinn Féin, while the Deputy Lord Mayor is Ruth Patterson of the Democratic Unionist Party, who were elected in May 2011. 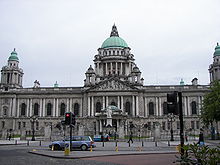 The position that is now the Lord Mayor originated in 1613 in the town's Royal Charter as the Sovereign of Belfast. In 1842, this position was restyled the Mayor of Belfast. in 1892, four years after Belfast was granted city status, the position was given Lord Mayor status, making it one of only three cities on the island of Ireland having a Lord Mayor, the other two being Cork and Dublin. In 1929, it became one of only six cities in the United Kingdom to have a Lord Mayor styled "the Right Honourable". Until 1973 the position was held for three years, when it was reduced to its current term of one year. From 1921 until 1972, the Lord Mayor was automatically entitled to a seat in the Senate of Northern Ireland.

For most of the City's modern history, the position has been held by Unionists, with members of the Ulster Unionist Party holding the post for a total of 61 of the 67 years between 1921 and 1997. The first non-Unionist Lord Mayor since the partition of Ireland in 1921 was David Cook from the Alliance Party who was elected in 1978. The first nationalist Lord Mayor was not appointed until the election of Alban Maginness from the Social Democratic and Labour Party (SDLP) in 1997, while a Sinn Féin Lord Mayor was first elected in 2002. The loss of the Unionist majority on the Council in 1997 has resulted in a greater rotation of the position amongst the parties, which, like other elected positions within the Council such as Committee chairs, is now filled using the D'Hondt system. This system awards positions to parties based on their number of Councillors and means that the Council that sits from 2011 to 2015 will see the Lord Mayor post filled twice by Sinn Féin (2011-12 & 2014-15), once by the Democratic Unionist Party (2012-13) and once by the SDLP (2013-14).

The Lord's Mayor's role is largely ceremonial, but does include the following powers and duties:[2]

The following is a list of Sovereigns of Belfast from the creation of the position in 1613 until it was replaced by the position of Mayor in 1842.[3]

The following is a list of Mayors of Belfast from the creation of the position in 1842 until it was replaced by the position of Lord Mayor in 1892.[4]

The following is a list of Lord Mayors of Belfast since the creation of the position in 1892.[5]