University of Toronto Faculty of Medicine

University of Toronto Faculty of Medicine 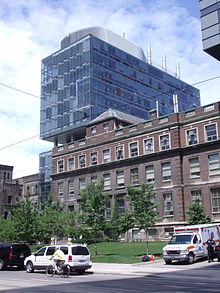 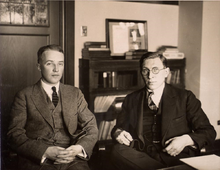 The university originally opened its medical school in 1843, providing instruction in medicine and medical sciences. In 1853, it suspended the school's teaching program and transferred teaching duties to the city's three proprietary schools: Trinity Medical College, the Toronto School of Medicine and Woman's Medical College. Because proprietary schools could not grant degrees, the university's medical school retained the responsibility of holding examinations and conferring medical degrees. As the university kept raising its standards, the medical examinations became increasingly rigorous and scientific.[2] This led to fewer medical students from proprietary schools deciding to obtain university degrees, which were not required for medical practice at the time.[2]

In 1887, the university resumed medical teaching in its Faculty of Medicine. The faculty promptly absorbed the Toronto School of Medicine, which could no longer compete with the university as it faced heavy costs of scientific work and higher examination standards set by the faculty.[2] 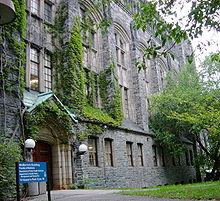 The Doctor of Medicine program at the University of Toronto has a total enrolment of about 850 students. In 2009, the average accepted undergraduate GPA was 3.89 (on the Ontario Medical Schools Application Service 4.0 scale) and the median score in the numerically graded sections of the MCAT was 11.[3][4] The University of Toronto is one of only a few programs in Canada to accept international students through its regular admission process, and not only through contract with foreign governments. The faculty also offers the M.D./Ph.D. degree jointly with University of Toronto doctoral programs, in addition to other degrees of master of science, master of health science, doctor of philosophy, and post-doctoral fellowships.

The program for the Doctor of Medicine degree spans four years. The first two years are known as the preclerkship curriculum, during which M.D. candidates acquire the basic biomedical and human anatomy knowledge. The principles of medical ethics, professionalism and medical jurisprudence are also taught in preclerkship. Courses are organized into two types, consisted of block courses that are taught sequentially and continuous courses that run weekly throughout the two years.

The Faculty of Medicine operates a health network that comprises twelve teaching hospitals with significant emphasis on tertiary care, including medical treatment, research and advisory services to patients and clients from Canada and abroad.[5] A core member of the network is the University Health Network, which itself consists of three specialized hospitals: Toronto General Hospital for cardiology and organ transplants; Princess Margaret Hospital for oncology as the home of the Ontario Cancer Institute; and Toronto Western Hospital for neuroscience and musculoskeletal health.[6] In total, medical students at the University of Toronto Faculty of Medicine have access to approximately 20 Toronto hospitals during their medical education.

In 2005, the Terrence Donnelly Centre for Cellular and Biomolecular Research opened a new research facility consisted of approximately 20,550 gross square metres [gsm] / 221,120 square feet laboratory and teaching facilities on 10 open concept floors. The facility houses about 400 diverse research specialists, including molecular and developmental biologists, geneticists, computer scientists, chemists and bioengineers. The facility received the 2006 Royal Institute of British Architects (RIBA) International Award and the 2006 Ontario Association of Architects Award of Excellence. It cost approximately $105 million, a large portion of the which were donated by philanthropist and lawyer, Terrence Donnelly. Other funding sources include the Canada Foundation for Innovation, Government of Ontario, Ontario Innovation Trust, University Infrastructure Investment Fund I’Anson Fund and private donations from University of Toronto alumni.

The Terrence Donnelly Centre for Cellular and Bimolecular Research is located in U of T campus on 150 College St. W. The site is a rectangular elongating from south to north and it is surrounded by historical buildings from its south east and west. The site was formerly used as parking lot, service area and pathway to the medical building. Designed and constructed between 2001 and 2005 by the German firm Behnisch Architekten and architectsAlliance of Toronto with their main goal focusing on collaborative ethics and sustainable design.

The CCBR rises above the neighboring buildings where aluminum and glass work together to create a glass tower which is standing on a concrete ground plane. The building is mainly a research facility with no lecture rooms. It is divided into two programmatic spaces. First is the public space located in the ground plane, and the second is the research facility. Three winter gardens are places in different levels across the building giving the researchers fresh air and nice space to work in. Unlike usual structure, each façade of the CCBR tells a different story. The south façade is a high performance curtain wall with double glazing separated by 800mm. this façade integrates inside of it high technological louvers system, together they work to maximize daylight, minimize heat gain/ loss, maximize natural ventilation and control wind. On the east façade colorful glazing are taking place in a sequence of the DNA bar code. Also, in the west façade when looked from distance the patterned ceramic glass represents the double stranded helix of the DNA molecule. Finally, with the use of social spaces, technology and sustainability the CCBR raises the standards of laboratories environment worldwide.[8]

MaRS Discovery District is an affiliated corporation that was established to help commercialize the faculty's life science and medical research through partnerships with private enterprises. 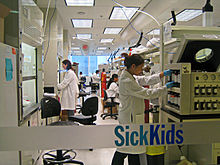 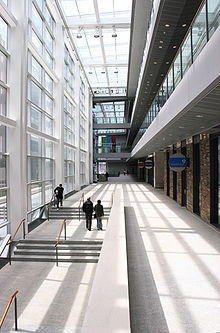