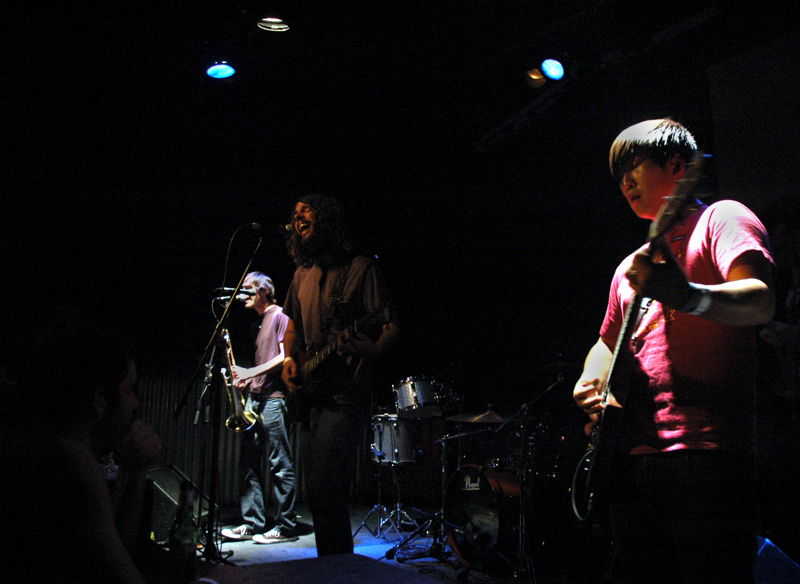 
Rx Bandits is a five-piece band based in . The band formed in 1996 in Orange County, , Originally known as The Pharmaceutical Bandits, they play predominantly music. They have appeared on the , Music and Arts Festival, and .

In 1997, the band released "", their first full-length album. "Those Damn Bandits" was a re-recording of an earlier demo, but excluded "Sleepy Tyme" and "High Skool" and included four new songs and a secret track. It was originally released through but signed the band shortly after and purchased the rights to "Those Damn Bandits," releasing it under their own label.

The band explored new styles with "", but continued to hold on to their ska roots while exploring a larger element of distorted punk rock. The album worked to branch out past the sound.

The album's success allowed them to tour with well-known acts such as , , and , and later headline shows with up-and-comers such as and frequently opening for them.

In 1999, the album was re-released with a new track list, 2 remastered songs and new artwork. The '99 release was also released under the bands new name, Rx Bandits.

In the time between "Halfway Between Here and There" and their next release, "Progress," bassist Franz Worth and saxophonist Noah Gaffney quit the band. Worth was replaced by James Salomone, formerly of . Gaffney's position was left open.

With 2001's "Progress", the band moved further beyond . The album contained the song "Analog Boy," which was made into one of their two music videos. The band at this point consisted of Embree, Tsagakis, Balling, Salomone, and the album included a number of guest performers, including former member Noah Gaffney.

Shortly after the release of the album, Chris Sheets joined the band on trombone as well as Steve Choi (formerly of ) on guitar and keyboards. Choi had played keyboards on the demos for Progress, but when it came time to record, they decided instead to have Rich Zahniser of , who was touring with the band, play on the album. Former trombonist Chris Colonnier also played with the band at times, in the same role as Zahniser. While they had just gained the two new members James Salomone and Rich Balling left the band. They had many temporary replacements for Salomone, most notably Johnny Tsagakis, Chris' younger brother, but eventually Joe Troy, a longtime friend of Embree, who helped to write the song "What If?" on "Halfway Between Here and There," joined the band as their bass player. Balling was replaced by saxophonist Steve Borth, who had played formerly in the popular East Bay ska-punk band . Their line-up of Embree, Tsagakis, Sheets, Choi, Troy and Borth would go on to create the next two albums, "" and "".

saw the release of "," a CD/DVD combination. The production of the album was unique to the band; guitars, bass, drums, and some keyboards were all recorded live in studio and vocals, horns, percussion and additional keyboard parts were then overdubbed. The band allowed themselves a limited number of takes for each part, and once a take was recorded it was left as it was, with no punch-ins. Embree also shared songwriting duties with Steve Choi, whereas he had previously been responsible for all of the band's material.

Musically, the album continued the genre mixing of "Progress" and experimented with unconventional s. It featured overtly political lyrics, and saw the band evolving even further from their ska-punk days as the Pharmaceutical Bandits; a subject that drummer Chris Tsagakis commented on in an interview conducted by former member Rich Balling for Skratch Magazine:

The album cover is an original composition called "Predictable" by , a Bay Area artist and member of both and DESA.

In 2004 the band released a DVD of live performances that were filmed during their many live shows. It was one of the first released on Embree's Mash Down Babylon Record label (aka MDB Records). It contains two Easter Eggs: a performance of the song "Up to No Good," the only song recorded during the sessions for "The Resignation" that was not included on the album as well as studio footage of the band working on the album. During the DVD's slide show, the background music is performed by Apotheke, a side project run by several members of the band.

"" was initially released online on , and was made available for purchase during the band's 2006 US Tour. The album's title is, notably, in reference to a number of 's poetry, in which the phrase appears repeatedly.

The album was originally slated to be released in 2005 through (with one album left on their contract), but for unspecified reasons, the band and label chose to part ways, causing lengthy delays in the release date. Finally free of any legal setbacks, the CD was made available via online order from MDB Records and on specified tour dates. Officially it debuted in retail stores in October , after which the band performed a Northeastern CD release tour to promote the album.

On , , the band announced via their page that saxophone player and backup vocalist Steve Borth had left the Rx Bandits to pursue his own band, Satori. This announcement came in the midst of their 2006 US Summer Tour to the surprise of many fans. Borth played his final show with the Rx Bandits on Tuesday, , at the in .

In conjunction with Refused TV, the Bandits recorded a music video for the title track off "". It is only their second music video since the making of a video for "Analog Boy" in 2001, and first independently produced video.

During their fall west-coast tour the band encouraged fans to tape audio from their performances to be released on an upcoming official bootleg compilation to be released by the end of the year.

Rx Bandits recently released their live set from the 2007 exclusively on the . "Live from Bonnaroo 2007" is currently only available for download from the .

Cathy Pellow of Sargent House announced via the Rx Bandits fansite that they will be making a live DVD of their performance at the Glasshouse on August 22nd.

Over the years, several members found time for side projects.

Embree and Chris Tsagakis can also be found in as “Walrus” and “Lynx” respectively. Former trombonist for Rx Bandits is known as the vocalist, The in . Joe Troy, Chris Sheets, and Steve Choi have performed live with the band, which includes (ex-, more recently of vocalist), among others.

Steve Borth played with Skacore band from Northern California called Link 80 on Asian Man Records. Later started the / band Satori and has featured Embree on bass, members of , and .

Steve Choi collaborated with founder in both and . The Rx Bandits were featured as Park's Bruce Lee Band during the recording of the Beautiful World EP. Choi is also a member of the band , in which he plays the drums.

September 9th, 2008 saw the release of Matt Embree's acoustic sideproject, entitled Love You Moon. The album is made solely of Matt on the acoustic guitar with the exception of 3 tracks where Chris Tsakagis assists on drums. This album was presold at the Rx Bandit's concurrent tour.