Glatiramer acetate (also known as Copolymer 1, Cop-1, or Copaxone - as marketed by Teva Pharmaceuticals) is an immunomodulator drug currently used to treat multiple sclerosis. It is a random polymer of four amino acids found in myelin basic protein, namely glutamic acid, lysine, alanine, and tyrosine, and may work as a decoy for the immune system. Glatiramer acetate is approved by the FDA for reducing the frequency of relapses, but not for reducing the progression of disability. Observational studies, but not randomized controlled trials, suggest that it may reduce progression of disability.

Although the clinical definition of multiple sclerosis requires two or more episodes of symptoms and signs, glatiramer acetate is approved for treatment after single episodes. It is also used to treat relapsing-remitting multiple sclerosis. It is administered by subcutaneous injection.

Glatiramer acetate is a random polymer (average molecular mass 6.4 kD) composed of four amino acids that are found in myelin basic protein. The mechanism of action for glatiramer is unknown, although several have been proposed. Administration of glatiramer shifts the population of T cells from pro-inflammatory Th1 cells to regulatory Th2 cells that suppress the inflammatory response.[1] Given its resemblance to myelin basic protein, glatiramer may also act as a sort of decoy, diverting an autoimmune response against myelin. The integrity of the blood-brain barrier, however, is not appreciably affected by glatiramer, at least not in the early stages of treatment. Glatiramer acetate has been shown in clinical trials to reduce the number and severity of exacerbations.[2]

The mechanism(s) by which glatiramer acetate exerts its effects in patients with Multiple Sclerosis (MS) is (are) not fully elucidated. However, it is thought to act by modifying immune processes that are currently believed to be responsible for the pathogenesis of MS. This hypothesis is supported by findings of studies that have been carried out to explore the pathogenesis of experimental autoimmune encephalomyelitis (EAE), a condition induced in several animal species through immunization against central nervous system derived material containing myelin and often used as an experimental animal model of MS. Studies in animals and in vitro systems suggest that upon its administration, glatiramer acetate-specific suppressor T-cells are induced and activated in the periphery.[3]

A 2004 Cochrane review[4] concluded that Glatiramer acetate "did not show any beneficial effect on the main outcome measures in MS, i.e. disease progression, and it does not substantially affect the risk of clinical relapses."

In its pivotal trial of 251 patients, after 2 years Copaxone failed to show any advantage in halting disability progression.[5][6]

A 15-year followup of the original trial compared patients who continued with glatiramir to patients who dropped out of the trial. Patients with glatiramer had reduced relapse rates, and decreased disability progression and transition to secondary progressive MS, compared to patients who did not continue glatiramer. However, the two groups were not necessarily comparable, as it was no longer a randomized trial. There were no long-term safety issues.[8]

Copaxone has FDA approval for clinically isolated syndrome, based on the PreCISe trial, which showed that glatiramer delayed the progression from the first clinical event to clinically definite multiple sclerosis with a risk reduction of 45%. 43% of patients in the placebo group converted, compared to 25% in the glatiramer group.[10]

Glatiramer acetate was originally discovered by Dr. Dvora Teitelbaum at the Weizmann Institute of Science in Rehovot, Israel. The efficacy and safety of glatiramer acetate were demonstrated in three main clinical trials. The first trial, led by Professor Murray Bornstein, was performed in a single center, double-blind, placebo controlled trial and included 50 patients.[citation needed] The second trial was a 2-year, multi-center, randomized, double-blind, placebo controlled trial and was performed in eleven US centers involving 251 patients. This study was led by Professor Kenneth Johnson, Chairman of the Department of Neurology, University of Maryland Medical Center, Baltimore.[citation needed] The third trial, a double-blind, multi-center, multi-country MRI study, involved 29 MS Centers in six European countries and Canada, with the participation of 239 patients. This study was led by Professor G. Comi, Department of Neuroscience, San Raffaele Hospital, the University of Milan.[citation needed]

Glatiramer acetate has been approved for marketing in 49 countries worldwide, including the United States, Israel, Canada and 24 European Union Countries.

Approval in the US was obtained in 1996. Glatiramer acetate was approved for marketing in the U.K. in August 2000, and launched in December. This first approval in a major European market enabled Teva to file for approval all over the European Union under the mutual recognition procedure. 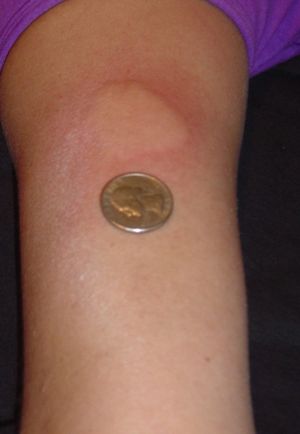 According to MediGuard, side effects may include a lump at the injection site (injection site reaction) in approximately 30% of users, and aches, fever, chills (flu-like symptoms) in approximately 10% of users.[11] Copaxone is the only disease modifying drug that does not cause flu like symptoms in patients. Side effect symptoms are generally mild in nature. A reaction that involves flushing, shortness in breath, anxiety & rapid heartbeat has been reported soon after injection in up to 5% of patients (usually after injecting directly into a vein). These side effects subside within thirty minutes. Over time, a visible dent at the injection site can occur due to the local destruction of fat tissue, known as lipoatrophy, that may develop.

More serious side effects have been reported for glatiramer acetate, according to the FDA's prescribing label, these include serious side effects to the body's Cardiovascular System, Digestive System (including Liver), Hemic and Lymphatic System, Musculoskeletal System, Nervous System, Respiratory System, Special Senses (in particular the eyes), Urogenital System; also reported have been Metabolic and Nutritional Disorders; however a link between glatiramer acetate and these adverse effects has not been definitively established.[12]

Glatiramer has been found to be protective in a mouse model of cerebral malaria.[13]