A Colpitts oscillator, invented in 1920 by American engineer Edwin H. Colpitts, is one of a number of designs for electronic oscillator circuits using the combination of an inductance (L) with a capacitor (C) for frequency determination, thus also called LC oscillator. The distinguishing feature of the Colpitts circuit is that the feedback signal is taken from a voltage divider made by two capacitors in series. One of the advantages of this circuit is its simplicity; it needs only a single inductor. Colpitts obtained US Patent 1624537[1] for this circuit.

The frequency is generally determined by the inductor and the two capacitors at the bottom of the drawing.

As with any oscillator, the amplification of the active component should be marginally larger than the attenuation of the capacitive voltage divider, to obtain stable operation. Thus, a Colpitts oscillator used as a variable frequency oscillator (VFO) performs best when a variable inductance is used for tuning, as opposed to tuning one of the two capacitors. If tuning by variable capacitor is needed, it should be done via a third capacitor connected in parallel to the inductor (or in series as in the Clapp oscillator).

Fig. 2 shows an often preferred variant, where the inductor is also grounded (which makes circuit layout easier for higher frequencies). Note that feedback energy is fed into the connection between the two capacitors. This amplifier provides current, not voltage, amplification.

Fig. 3 shows a working example with component values. Instead of bipolar junction transistors, other active components such as field effect transistors or vacuum tubes, capable of producing gain at the desired frequency, could be used.

The ideal frequency of oscillation for the circuits in Figures 1 and 2 are given by the equation:

where the series combination of C1 and C2 creates the effective capacitance of the LC tank.

Real circuits will oscillate at a slightly lower frequency due to junction capacitances of the transistor and possibly other stray capacitances. 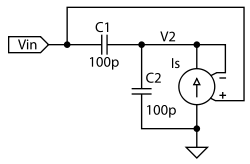 An ideal model is shown to the right. This configuration models the common collector circuit in the section above. For initial analysis, parasitic elements and device non-linearities will be ignored. These terms can be included later in a more rigorous analysis. Even with these approximations, acceptable comparison with experimental results is possible.

Ignoring the inductor, the input impedance can be written as

Where Z2 is the impedance of C2. The current flowing into C2 is i2, which is the sum of two currents:

Where is is the current supplied by the transistor. is is a dependent current source given by

Where gm is the transconductance of the transistor. The input current i1 is given by

Where Z1 is the impedance of C1. Solving for v2 and substituting above yields

The input impedance appears as the two capacitors in series with an interesting term, Rin which is proportional to the product of the two impedances:

If Z1 and Z2 are complex and of the same sign, Rin will be a negative resistance. If the impedances for Z1 and Z2 are substituted, Rin is

If an inductor is connected to the input, the circuit will oscillate if the magnitude of the negative resistance is greater than the resistance of the inductor and any stray elements. The frequency of oscillation is as given in the previous section.

This value should be sufficient to overcome any positive resistance in the circuit. By inspection, oscillation is more likely for larger values of transconductance and/or smaller values of capacitance. A more complicated analysis of the common-base oscillator reveals that a low frequency amplifier voltage gain must be at least four to achieve oscillation.[2] The low frequency gain is given by:

If the two capacitors are replaced by inductors and magnetic coupling is ignored, the circuit becomes a Hartley oscillator. In that case, the input impedance is the sum of the two inductors and a negative resistance given by:

The amplitude of oscillation is generally difficult to predict, but it can often be accurately estimated using the describing function method.