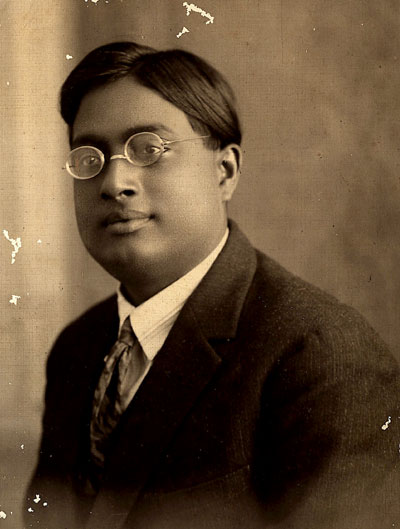 caption = Satyendra Nath Bose
birth_date = birth date|1894|1|1|mf=y
birth_place = ,
residence =
nationality = n
death_date = death date and age|1974|02|04|1894|01|01
death_place = ,
field =
work_institution =
alma_mater = Presidency College of the
doctoral_advisor =
doctoral_students =
known_for = , ,
prizes =
religion =
footnotes = Note that Bose did not have a doctorate, but obtained an MSc from the University of Calcutta in 1915 and therefore did not have a doctoral advisor. However his equivalent mentor was J. C. Bose.

Satyendra Nath Bose (Unicode|/sɐθ.jin.ðrɐ nɑθ bos/ _bn. সত্যেন্দ্র নাথ বসু) (, &ndash; , ), FRS, was an Indian , specializing in . He is best known for his work on in the early 1920s, providing the foundation for and the theory of the . He is honored as the namesake of the .

Although more than one was awarded for research related to the concepts of the , Bose-Einstein statistics and Bose-Einstein condensate—the latest being the 2001 , which was given for advancing the theory of Bose-Einstein condensates, Bose himself was never awarded the Nobel Prize. Among his other talents, Bose spoke several languages and could also play the "", a musical instrument similar to a .

In his book, "The Scientific Edge", the noted physicist observed:

:"S.N.Bose’s work on particle statistics (c. 1922), which clarified the behaviour of s (the particles of in an enclosure) and opened the door to new ideas on statistics of Microsystems that obey the rules of quantum theory, was one of the top ten achievements of 20th century Indian science and could be considered in the Nobel Prize class." [ "The Scientific Edge" by Jayant V. Narlikar, Penguin Books, 2003, page 127. The work of other 20th century Indian scientists which Narlikar considered to be of Nobel Prize class were , and . ]

Bose was born in (Calcutta), , the eldest of seven children. His father, Surendranath Bose, worked in the Department of the .

Bose attended in Calcutta, and later attended Presidency College, also in Calcutta, earning the highest marks at each institution. He came in contact with teachers such as (no relation) and who provided inspiration to aim high in life. From 1916 to 1921 he was a in the physics department of the . In 1921, he joined the department of Physics of the then recently founded Dacca University (now in and called ), again as a lecturer.

In 1924 Bose wrote a paper deriving Planck's quantum radiation law without any reference to . After initial setbacks to his efforts to publish, he sent the article directly to in . Einstein, recognizing the importance of the paper, translated it into German himself and submitted it on Bose's behalf to the prestigious "". As a result of this recognition, Bose was able to leave India for the first time and spent two years in , during which he worked with Louis de Broglie, , and Einstein.

Bose returned to Dhaka in 1926. He became a and was made head of the Department of Physics, and continued teaching at until 1945. At that time he returned to Calcutta, and taught at Calcutta University until 1956, when he retired and was made professor .

The error that wasn't

There are three outcomes. What is the probability of producing two heads?
While presenting a lectureFact|date=June 2008 at the on the and the , Bose intended to show his students that the current theory was inadequate, because it predicted results not in accordance with experimental results. During this lecture, Bose committed an error in applying the theory, which unexpectedly gave a prediction that agreed with the experiment. (He later adapted this lecture into a short article called "Planck's Law and the Hypothesis of Light Quanta".)
Since the coins are distinct, there are two outcomes which produce a head and a tail. The probability of two heads is one-fourth.
The error was a simple mistake—similar to arguing that flipping two fair coins will produce two heads one-third of the time—that would appear obviously wrong to anyone with a basic understanding of . However, the results it predicted agreed with experiment, and Bose realized it might not be a mistake at all. He for the first time took the position that the would not be true for microscopic particles where fluctuations due to will be significant. Thus he stressed the probability of finding particles in the , each state having volume h³, and discarding the distinct position and of the particles.

journals refused to publish Bose's paper. It was their contention that he had presented to them a simple mistake, and Bose's findings were ignored. Discouraged, he wrote to , who immediately agreed with him. His theory finally achieved respect when Einstein sent his own paper in support of Bose's to "", asking that they be published together. This was done in 1924. Bose had earlier translated Einstein's theory of General Relativity from German to English. It is said that Bose had taken as his "" (mentor). [cite web|url=http://www.calcuttaweb.com/people/snbose.shtml|title=Calcuttaweb - People: Satyendra Nath Bose|accessdate=2007-09-30|author=M.R.Shanbhag|authorlink=Calcuttaweb]

The reason Bose's "mistake" produced accurate results was that since photons are indistinguishable from each other, one cannot treat any two photons having equal energy as being two distinct identifiable photons. By analogy, if in an alternate universe coins were to behave like photons and other s, the probability of producing two heads would indeed be one-third (tail-head = head-tail). Bose's "error" is now called .

Einstein adopted the idea and extended it to atoms. This led to the prediction of the existence of phenomena which became known as , a dense collection of s (which are particles with integer spin, named after Bose), which was proven to exist by experiment in 1995.

Bose's ideas were afterwards well received in the world of physics, and he was granted leave from the to travel to in 1924. He spent a year in and worked with Marie Curie, and met several other well-known s. He then spent another year abroad, working with Einstein in . Upon his return to Dhaka, he was made a professor in 1926. He did not have a , and so ordinarily he would not be qualified for the post, but Einstein recommended him. His work ranged from to unified field theories. He also published an for es with .

Apart from physics he did some research in and (Bengali, English). He made deep studies in , , , , and other s. Being of i origin he devoted a lot of time to promoting Bengali as a teaching language, translating scientific papers into it, and promoting the development of the region.

In 1944 Bose was elected General President of the .

"Once the great scientist, , was delivering a lecture. Bose presided. At one stage the lecturer had some difficulty in explaining a point. He had been writing on the blackboard; he stopped and, turning to Bose, said, "Can Professor Bose help me?" All the while Satyendranath had been sitting with his eyes shut. The audience could not help smiling at Professor Bohr's words. But to their great surprise, Bose opened his eyes; in an instant he solved the lecturer's difficulty. Then he sat down and once again closed his eyes!" [ [http://www.calcuttaweb.com/people/snbose.shtml Calcuttaweb.com] - Biography on Bose]