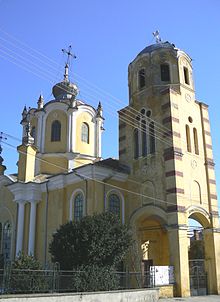 Coat of arms of Maglizh

Maglizh (Bulgarian: Мъглиж) is a town in Stara Zagora Province, South-central Bulgaria. It is the administrative centre of the homonymous Maglizh Municipality. As of December 2009, the town has a population of 3,426 inhabitants.[1]