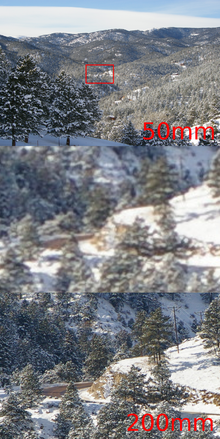 Digital zoom was used to make the middle photo from the top photo, while the lens was zoomed-in optically for the bottom photo. Typically, the digital zoom would not be available until after the optical zoom had been exhausted.

Digital zoom is a method of decreasing (narrowing) the apparent angle of view of a digital photographic or video image. Digital zoom is accomplished by cropping an image down to a centered area with the same aspect ratio as the original, and usually also interpolating the result back up to the pixel dimensions of the original. It is accomplished electronically, with no adjustment of the camera's optics, and no optical resolution is gained in the process.

When comparing the image quality achieved by digital zoom with image quality achieved by resizing the image in post-processing, there's a difference between cameras that perform potentially lossy image compression like JPEG, and those that save images in an always lossless Raw image format. In the former case, digital zoom tends to be superior to enlargement in post-processing, because the camera may apply its interpolation before detail is lost to compression. In the latter case, resizing in post-production yields results equal or superior to digital zoom.