Dobšinská Ice Cave or Dobšinská ľadová jaskyňa (in Slovak) is an ice cave in Slovakia, near the mining town of Dobšiná in the Slovak Paradise. Since 2000 it is included in the UNESCO World Heritage list as a part of Caves of Aggtelek Karst and Slovak Karst site. It lies 130 m above the Hnilec River, and the entrance is at an altitude of 970 m.

The cave was discovered on 15 June 1870 by a royal mining engineer Eugen Ruffinyi, accompanied by G. Lang and Andrej Mega, though the entrance was known from time immemorial by shepherds and hunters as Studená diera (Cold Hole). The cave was opened to the public one year after its discovery. In 1887, it was the first electrically lit cave in Europe. 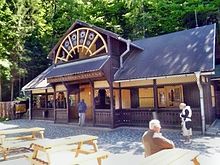 Entrance to the Dobšinská Ice Cave

At about this time 7,171 square metres of the cave's known area of 8,874 square metres were reported covered with ice. The total ice volume was estimated at 125,000 cubic metres[1], which makes it one of the most important ice caves in the world. The thickness of the ice reaches up to 26.5 m.

The cave floor descends from the entrance which faces North; this results in rapid cooling of the cave in winter as cold air can fall down. On the other hand, the interior is quite protected from the warm environment in summer. Thus the annual temperature average stays around 0°C. The cave iced up, as this cycle repeated for many centuries. The age of the cave is estimated at approximately 250,000 years.

Famous visitors to the ice cave have been Prince August von Sachsen Gotha and his wife (1872), Ferdinand de Lesseps (constructor of the Suez Channel) and a party of French writers (1884), the Bulgarian czar Ferdinand I (1890) and the polar explorer Fridtjof Nansen (1900).