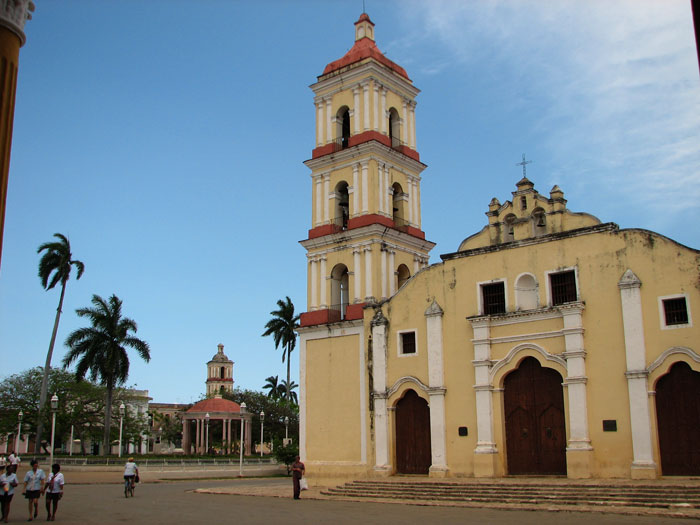 Remedios is located about 4 hours away by bus from , around 50 minutes from Santa Clara and there is less than an hour from there to beach resorts in the Santa Maria - Las Brujas keys both situated north of the province.

It is recognized as the eighth oldest city in Cuba, but its real date of foundation has been obscured over time, and it may be the third Spanish settlement on the island. Historians place the foundation date sometime between 1513 and 1524 by Spanish nobleman Vasco Porcallo de Figueroa, originally founded by him on the 13th of April 1514. Documents reflect that this settlement was only preceded by Baracoa (1511) and (1515), considering this facts some believe it was actually founded before Trinidad (1514) and (1515) among others. Rumor has it that Vasco, in order to avoid tax payments to the crown, maintained the village hidden from the knowledge of the King of Spain as long as he could, but the village grew quickly, and at some point it had to be recognized. Through his wife, the daughter of the Cacique of Sabaneque, Vasco received a huge land grant as a personal fief from Gobernor Diego Velazquez as stipulated by Spanish law, therefore it had no municipal entity to govern the town. Upon Vasco's death in Puerto Principe in 1550 the town obtained its charter.

By 1678 the demarcation between Remedios and Sancti Spiritus was already established. Along with cattle raising the sugar industry was developed and by the end of the 17th and beginning of the 18th century the cultivation of tobacco, coffe and cacao was begun. In 1682, a major dispute arose among the settlers, led by Father Gonzalez de la Cruz, who claimed that satanic forces had taken hold of the place. This led the Spanish Crown to send a Royal Decree dated 29th of January 1684 transferring the settlement to another place. Only 18 families left the town and went on to establish on the 15th of July 1689 the village of , today an important city in the center of Cuba and the capital of the province of Las Villas.

Main attractions of this plaza is the colonial grand church "Iglesia Mayor" of San Juan Bautista containing 13 beautifully decorated gold altars. The city was under constant siege by pirates of the Caribbean and therefore the gold was hidden under white paint. In a renovation that took place between 1944 and 1954 thanks to the generous Cuban millionaire philanthropist Eutimio Falla Bonet, the real gold under coats of paint was re-discovered. The story goes that Falla Bonet traced his family tree back to nearby Santa Clara, and found that one of his ancestors had been a founding member of the city and had been born in Remedios. On the north side of the square sits another church, the less fortunate Iglesia del Buen Viaje. Remedios is the only town in Cuba with two churches on its main square, but the Iglesia del Buen Viaje is abandoned, leaking and closed until repairs can be made. The Central Plaza or "Plaza Mayor" was restored in 1970 and is surrounded by colonial buildings, beautiful monuments, trees, palms and a gazebo like many towns in Cuba, following a Spanish urban standard.

Remedios is distinguished by many Cubans for its Christmas festival, "Las Parrandas de Remedios", one of the most popular events of the region that takes place between the 16th to the 26th of December every year. Considered the oldest festivities in Cuba, the "" were initially promoted by Father Francisco Vigil de Quiñones, who used to officiate at the Iglesia Mayor of San Juan Bautista de los Remedios. The priest, who was concerned about the absence of parishioners at the "Misa de Gallo" (midnight mass), had the idea of encouraging children to take to the streets and wake up the citizens using whistles, horns and tin cans, so that they had no other choice than get up and attend mass. That singular and noisy initiative got deeply rooted among the population, resulting in the most attractive festivity in the country. In 1871, the "parrandas" adopted a structure that has survived the passage of time. According to tradition, when the bells of the Iglesia Parroquial Mayor (Major Parochial Church) toll at 9 o'clock on the night of December 24, two neighborhoods make public their creativeness and efforts made during the entire year to participate in the competition. During the "parrandas", a "fierce" competition takes place between the neighborhoods of San Salvador, represented by the colors red and blue, and a rooster as a symbol, and El Carmen, represented by the color brown and a globe. The memory of those celebrations is compiled at the Museum of Parrandas, which opened in a 19th century building in 1980 in Remedios, where photos, documents and hand-made objects linked to the festivities are preserved.