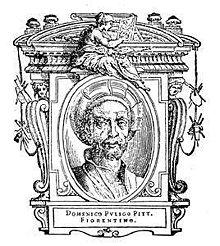 Portrait of Domenico Puligo, illustration from "Le Vite" by Giorgio Vasari, edition of 1568

Domenico Puligo (1492–1527) was an Italian painter of the Renaissance, active in Florence. His real name was Domenico di Bartolommeo Ubaldini.

He was trained by Ridolfo Ghirlandaio, but acquired a style consistent with his contemporary Andrea del Sarto. He painted a Vision of Saint Bernard altarpiece, now in Walters' Gallery in Baltimore. He was also in demand for portraits. He is featured in Giorgio Vasari's Vite or biographies of artists. He excelled as a portrait painter. He befriended Andrea del Sarto ane worked with Ridolfo Ghirlandaio. His brother, Jacone Puligo was also a Renaissance painter.