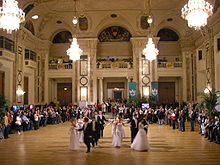 Cotillion figures demonstrated in the Festsaal, Hofburg, Vienna, in 2008

The cotillion is a type of patterned social dance that originated in France in the 18th century and was originally made up of four couples in a square formation, the forerunner of the quadrille; in the United States the square dance, where the "figures" are called aloud by the caller, is a form of rural contredanse that also descended from the urban cotillion. Its name, from French cotillon, "petticoat", reflected the flash of petticoats as the changing partners turned. The cotillion, of repeated "figures" interspersed with "changes" of different figures to different music,[1] was one of many contredanses where the gathered participants were able to introduce themselves and to flirt with other dancers through the exchange of partners within the formation network of the dance. By the 19th century, the cotillion evolved to include more couples with many complex dance figures.

In British usage, cotillion has disappeared, save in French or historical contexts.[2] Cotillions were introduced in London about 1766[3] by French dancing masters. They came to America in about 1772. There is a reference to a dance in the French manner, implying a 'cotillon', in John Gay's Beggar's Opera of 1728, where the low-life characters of London dance in imitation of the fashions of the wealthy.[4]

A "German cotillion", in contemporary accounts, was reintroduced to New York society at a costume ball with a Louis XV theme given by Mr William Colford Schermerhorn in the early winter of 1854.[5]