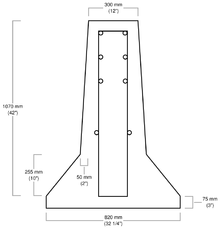 42-inch (110 cm)-high version of the Jersey barrier for deflecting automobiles and semi-trailer trucks.

A Jersey barrier or Jersey wall is a modular concrete barrier employed to separate lanes of traffic. It is designed to both minimize vehicle damage in cases of incidental contact while still preventing crossover in the case of head-on accidents.

Also utilized extensively to re-route traffic and protect pedestrians during highway construction, such barriers are increasingly deployed in anti-terrorism roles as both quick fixes and semi-permanent protections against perceived landborne threats.

Jersey barriers are known colloquially by a variety of names in the U.S., including Jersey bumps and, in the western states, K-rail --a term borrowed from the California Department of Transportation specification for temporary concrete traffic barriers. 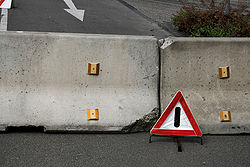 Jersey barriers on the road.

The Jersey barrier was developed at Stevens Institute of Technology in Hoboken, New Jersey, United States, under the direction of the New Jersey State Highway Department to divide multiple lanes on a highway.[1] A typical Jersey barrier stands 32 inches (81 cm) tall and is made of steel-reinforced poured concrete.[2] Many are constructed with the embedded steel reinforcement protruding from each end, allowing them to be incorporated into permanent emplacements when linked to one another by sections of fresh concrete poured on-site.

Their widespread use in road construction has led to wide application as a generic, portable barrier during general construction projects and temporary re-routing of traffic into stopgap carpool and rush hour reversing highway lanes.[3]

The design of the Jersey barrier was specifically intended both to minimise damage in incidental accidents and reduce the likelihood of a car crossing into oncoming lanes in the event of a collision. In common shallow angle hits sheet metal damage is minimised by allowing the vehicle tires to ride up on the lower sloped face. Head-ons are minimised by gradually lifting the vehicle and pivoting it away from oncoming vehicles and back into traffic heading in its original direction. 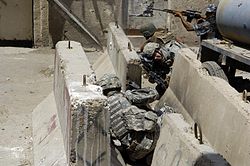 Modern variations include the constant slope barrier and the F-shape barrier. The F-shape is generally similar to the Jersey barrier in appearance but is taller with somewhat different angles.[3]

The UK equivalent is the concrete step barrier.

First tested in 1968 by the then Department of Highways in Ontario, Canada, the Ontario Tall Wall is a variant of the Jersey barrier.[4] Standing at 42 inches (110 cm), it is 10 inches (25 cm) taller than the standard Jersey barrier. In Ontario, the Ministry of Transportation is replacing guiderails (steel guardrail and steel box-beam) with these barriers on 400-series highways.

The New Jersey Turnpike Authority developed and tested a similar, but heavily reinforced, design. This barrier design has been credited with effectively containing and redirecting larger vehicles, including semi-trailer (tractor-trailer) trucks.[3] The states of New York, Massachusetts, and New Jersey have adopted the taller barrier for their roads, as compared to the standard 32 inches suggested by the Federal Highway Administration.[4]

Designs with two rectangular notches at the bottom (through the short axis) allow for forklift-style lifting by front-end loaders. Barriers meant for short-term placement --especially in military and security barrier uses-- might include steel rebar loops embedded in the top surface for rapid hook-and-cable system lifting.

The 2010 G-20 Toronto summit used a modified modular Jersey barriers with wired fencing bolted onto the concrete. The fence used the barrier as sturdy base to prevent protesters from toppling the fence around the security zone at the Metro Toronto Convention Centre.

Hollow polyethylene barriers have been developed for short-term applications where portability is important. These plastic barriers are normally filled with water after placement on-site to provide a moderate level of crash protection. They are not designed to deflect vehicles; vehicles may penetrate the barriers.[5] These barriers can also be filled with soil, spill or cement to produce a heavier barrier with greater crash protection, at the cost of reduced portability.