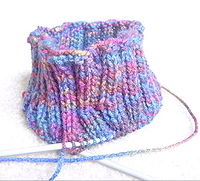 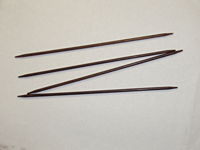 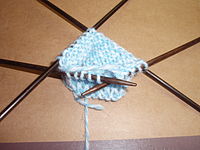 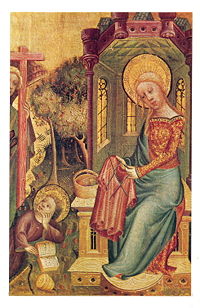 The earliest image of circular knitting, from the 15th century AD.

Circular knitting or knitting in the round is a form of knitting that creates a seamless tube. When knitting circularly, the knitting is cast on and the circle of stitches is joined. Knitting is worked in rounds (the equivalent of rows in flat knitting) in a spiral.[1] Originally, circular knitting was done using a set of four or five double-pointed needles. Later, circular needles were invented, which can also be used to knit in the round: the circular needle looks like two short knitting needles connected by a cable between them. Longer circular needles can be used to produce narrow tubes of knitting for socks, mittens, and other items using the Magic Loop technique. Machines also produce circular knitting; double bed machines can be set up to knit on the front bed in one direction then the back bed on the return, creating a knitted tube.[2] Specialized knitting machines for sock-knitting use individual latch-hook needles to make each stitch in a round frame.[3]

Many types of sweaters are traditionally knit in the round. Planned openings (arm holes, necks, cardigan fronts) are temporarily knitted with extra stitches, reinforced if necessary. Then the extra stitches are cut to create the opening, and are stitched with a sewing machine to prevent unraveling.[4] This technique is called steeking.