Vehicle registration plates of the People's Republic of China

Vehicle registration plates of the People's Republic of China

Blue PRC licence plates of the 1992 standard (August 2004 image). Last character of registration is not shown. This is an example of a vehicle registered to a Chinese citizen or entity.

Black PRC licence plates of the 1992 standard (August 2004 image). Last character of registration is not shown. This is an example of a vehicle registered to a foreign national, or a Chinese national who is not a permanent resident of Mainland China.

The People's Republic of China issues vehicles licence plates (Chinese: 车辆号牌; pinyin: chē​liàng​ hào​pái​) at its Vehicle Management Offices, under the administration of the Ministry of Public Security.

The current plates are of the 1992 standard, which consist of the one-character provincial abbreviation, a letter of the alphabet, and five number or letters of the alphabet (Ex. 沪A*12345; 京C*A1234; 苏A*1P234; 浙B*AB987; 粤Z*7C59港). Previously, all licence plates had used the five-number designation. As the number of motor vehicles grew, however, the number had to exceed what was the maximum previously allowable—90,000 or 100,000 vehicles. Therefore there had become a need to insert Latin letters into the licence plate to increase the number of possible combinations. This was first done in the bigger cities with only one prefix. Nanjing, for example, began the change with only the first number, which increased the number of possible combinations to 340,000 (with the exceptions of O & I, which cannot be printed without confusion with the numbers 0 & 1). Further changes allowed the first two places, or the second place alone on the plate to be letters, allowing 792,000 more combinations mathematically. More recently, cities have taken to having the third letter alone being a Latin letter, the rest numbers. The numbers are produced at random, and are computer-generated at the issuing office. Numbers with a sequence of 6's, 8's, or 9's are usually considered to be lucky, therefore special sequences like "88888" or "86888" can be purchased. (A previous licence plate system, with a green background and the full name of the province in Chinese characters, actually had a sequential numbering order, and the numbering system was eventually beset with corruption.)

Yellow plates are issue for large vehicles, such as trucks and buses and motorcycles. These licence plates usually have the Designate Area and Letter on top of the numbers, as opposed to being beside it. (In addition, they may have the licence number sprayed in large letters on the outside of the truck, or in more prominent places.) Blue plates, the most common sort, are issued for vehicles which are small or compact in size (Exept for motorcycles). Until October 2007, black plates are issued for vehicles belonging to foreigners, but they are still used for people driving into Mainland China from Hong Kong and Macau.

Police Service, Armed Police Force, and Military are in a white background, with red and black text.

Police Service plates have a designated format of X·LLNNN·"警" (X being the geographical abbreviation, N being numbers, and L being possible numbers or letters, "警" meaning police and coloured red). These plates are issued to traffic police, some patrol vehicles, court, and procuratorate vehicles.

The first two small letters behind the WJ are area prefixes:

The Alphabet Numeral behind the area prefix shows the section of the Armed police:

Military vehicles previously had plates using a code of heavenly stems in red. After reorganization in 2004, military vehicles now use a more organized of prefixes. These license plates use the format XL·NNNNN (X being the prefix, L being a letter).

The Ground Force of PLA vehicle of the various military regions have their own prefixes:

The Navy of PLA vehicle prefixes:

A vehicle with a government or military plate are not subject to the Road Traffic Safety Law of the People's Republic of China (中华人民共和国道路交通安全法); they may run red lights, drive in the wrong direction or weave in and out of traffic[citation needed].[1] Communist party officials and People's Liberation Army members are also exempt from paying road tolls and adhering to parking regulations.[2][3] According to Xinhua News Agency, "police officers are also reluctant to pull over drivers of military vehicles even if the drivers are breaking the law",[3][4] which is the reason behind an emerging trend where individuals purchase counterfeit military registration plates to avoid being pulled over by police. Xinhua reported in 2008 that since July 2006, over 4,000 fake military vehicles and 6,300 fake plates have been confiscated, and criminal gangs involving 5,000 people have been apprehended; under Chinese law, those caught driving under fake registration plates are fined up to 2,000 RMB, and counterfeiters can be jailed for up to three years.[3][5]

Motorcycle licence plates are nearly the same as that for ordinary vehicles, but are less in length and look more like an elongated square than a banner-like rectangle. There are two lines of text (province code and letter on the top, numbers on the bottom).

For qinqi or low-powered motorbikes, yellow licence plates are issued throughout.

Embassy and consulate vehicles have their own licence plate with a red character and six white numbers. Embassy plates have a black background (following the foreigner plate standard, as previously mentioned). Embassies use 使 (shǐ) (for 使馆, which means 'embassy') and are used only in Beijing. Consulates use 领 (lǐng) (for 领事馆, which means 'consulate') and are used for representations outside Beijing. Numbers on embassy plates are formatted so that the first three digits represent the foreign entity/organization the vehicle is registered to while the last three digits are sequential, where 001 is (generally) the Ambassador's car, for example: 使 224 001 - is the car used by the Ambassador of the United States. Numbers 002 to 005 are usually reserved for official use and therefore have the comfort of the highest levels of diplomatic immunity.

In order to protect the privacy of foreign diplomats in the P.R. China, the Chinese government does not release information on embassies' vehicles, so it is possible that some data in the list of plate prefixes of embassies in the P.R. China below may not be correct.

Airports have licence plates with white characters on a green background with the designation min hang (Civilian Air Transportation). This shade of green is slightly lighter than the variant used on normal licence plates prior to 1992.

Cross-border with Hong Kong and Macau 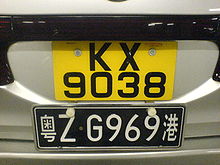 Licence plates with a black background and the character 港 or 澳 in place of the last number are used for Hong Kong and Macau vehicles, respectively, when they engage in cross-border traffic to and from Mainland China. These plates often exist side by side with a local HK or Macau licence plate on the same car. See the section on Guangdong license plates.

Interim licence plates are a piece of paper to be affixed to the front of the vehicle's window, usually valid for 15 days.

For a short while in the summer of 2002, a new 2002 standard was instituted in several cities, including Beijing. They enabled number/alphabetical customisation. (The possible combinations were NNN-NNN, NNN-LLL and LLL-NNN, where N would be a number and L a letter. However, although the usage of "CHN", to designate China, was not permitted in the plates, that restriction, oddly enough, did not apply to the letters "PRC".) The VIN was also added to the new plates, and the plates were white, with a gradual blue tint at the bottom end of the plates. Black letters were used on the plate.

In late August 2002 new 2002 standard plates had their issuance temporarily interrupted, officially for technical reasons, but actually because some lewd, provocative and controversial number/alphabetical combinations were used. One of the biggest controversies was when a vehicle with plate number USA-911 was spotted in Beijing, causing an uproar. Equal uproars were created with such plates as PRC-001, and trademark violations were rife; the plate number IBM-001 was seen. The WTO acronym was also spotted in the plates. In a society that is still rather conservative in this topic, the plate SEX-001 was the source of yet another controversy. The number 250, an insult in spoken Chinese, was also spotted in some plates.

Possibly due to the controversies as described above, as of summer 2003, the new plates are no longer being issued. Old plates of the 2002 standard are not being recalled.

The Ministry of Public Security has announced on October 30, 2007, that the 1992 vehicle license plate system will be overhauled on November 1, 2007.

Number plates issued in the 1992 standard will not be recalled but black plates will no longer be issued. Neither will plates issued to embassies be affected.

It is believed this is a China-wide standard. Many provinces and municipal cities have since introduced personalized number plates with different limitations. It is generally possible to choose from several alphabetical-numerical combination and personalize some of the digits.

The following lists all licence plate prefixes in use in the People's Republic of China, divided into four sections: municipalities, provinces, autonomous regions and others.

This list might not be up to date, complete or accurate. Please amend as you see fit.

The difference between the urban area and suburbs was revoked by competent authority since April 25 of 2009.

This license plate is different from the other civilian license with blue background. It's word and figures on white background. As a matter of fact, it is military license at all, and has an unique characteristic.
There is only one garrison in Mainland China - Beijing Garrison (Beijing WeiShuQu; "北京卫戍区"), other guarding area called "XX Guarding Area" (XX JingBeiQu; "XX警备区"). Chinese simplified character "卫" (one of "北京卫戍区"/Beijing Garrison) has the same pronunciation with the "V". So, the "京" (Jing) and the "V", their pronunciation is Jing Wei, Chinese is "京卫", it is a Chinese abbreviation of "北京卫戍区" (Beijing Garrison).
1) General license for the red word "京" and black 'V' along with figures.
2) Crucial vehicle for the red word "京" and 'V' with black figures.
Misunderstanding
Some people think that "京V" does not belong to one unit, it belongs to various machinery. In fact, Beijing Garrison takes charge in safekeeping services and aims at important leadership in various machinery of states, including military, party, and government. Traffic safety is part of security. So the vehicle of leadership belonging to garrison systems. 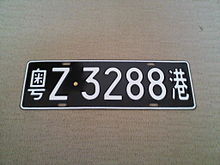 Black PRC licence plates of the 1992 standard for vehicles from Hong Kong that are authorized to cross into Mainland China.