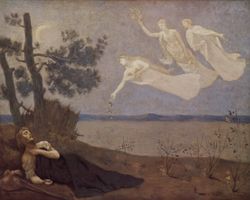 Dream art is any form of art directly based on material from dreams, or which employs dream-like imagery.

References to dreams in art are as old as literature itself: the story of Gilgamesh, the Bible, and the Iliad all describe dreams of major characters and the meanings thereof. However, dreams as art, without a "real" frame story, appear to be a later development—though there is no way to know whether many premodern works were dream-based.

In European literature, the Romantic movement emphasized the value of emotion and irrational inspiration. "Visions", whether from dreams or intoxication, served as raw material and were taken to represent the artist's highest creative potential.

In the late 19th and early 20th centuries, Symbolism and Expressionism introduced dream imagery into visual art. Expressionism was also a literary movement, and included the later work of the playwright August Strindberg, who coined the term "dream play" for a style of narrative that did not distinguish between fantasy and reality.

At the same time, discussion of dreams reached a new level of public awareness in the Western world due to the work of Sigmund Freud, who introduced the notion of the subconscious mind as a field of scientific inquiry. Freud greatly influenced the 20th-century Surrealists, who combined the visionary impulses of Romantics and Expressionists with a focus on the unconscious as a creative tool, and an assumption that apparently irrational content could contain significant meaning, perhaps more so than rational content.

The invention of film and animation brought new possibilities for vivid depiction of nonrealistic events, but films consisting entirely of dream imagery have remained an avant-garde rarity. Comic books and comic strips have explored dreams somewhat more often, starting with Winsor McCay's popular newspaper strips; the trend toward confessional works in alternative comics of the 1980s saw a proliferation of artists drawing their own dreams.

In the collection, The Committee of Sleep, Harvard psychologist Deirdre Barrett identifies modern dream-inspired art such as paintings including Jasper Johns's Flag, much of the work of Jim Dine and Salvador Dalí, novels ranging from "Sophie's Choice" to works by Anne Rice and Stephen King and films including Robert Altman's Three Women, John Sayles Brother from Another Planet and Ingmar Bergman's Wild Strawberries. That book also describes how Paul McCartney's Yesterday was heard by him in a dream and Most of Billy Joel's and Ladysmith Black Mambazo's music has originated in dreams.

Dream material continues to be used by a wide range of contemporary artists for various purposes. This practice is considered by some to be of psychological value for the artist—independent of the artistic value of the results—as part of the discipline of "dream work".

The international Association for the Study of Dreams[1] holds an annual juried show of visual dream art.

Notable works directly based on dreams

Works intended to resemble dreams, but not directly based on them