The Jack Benny Program, starring Jack Benny, is a radio-TV comedy series that ran for more than three decades and is generally regarded as a high-water mark in 20th-century American comedy.[1] 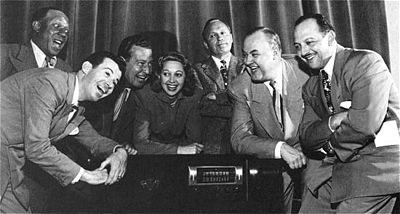 Sam Hearn as Schlepperman in 1937.

Jack Benny first appeared on radio as a guest of Ed Sullivan in 1932.[3] He was then given his own show later that year, with Canada Dry Ginger Ale as a sponsor —The Canada Dry Program, beginning May 2, 1932, on the NBC Blue Network and continuing there for six months until October 26, moving the show to CBS on October 30. With Ted Weems leading the band, Benny stayed on CBS until January 26, 1933.[1]

The television show was a seamless continuation of Benny's radio program, employing many of the same players, the same approach to situation comedy and some of the same scripts. The suffix "Program" instead of "Show" was also a carryover from radio, where "program" rather than "show" was used frequently for presentations in the non-visual medium. Occasionally, in several live episodes, the title card read, "The Jack Benny Show". During one live episode, both titles were used.

The Jack Benny Program appeared infrequently during its first two years on CBS TV. Benny moved into television slowly: in his first season (1950–1951), he only performed on four shows, but by the 1951-1952 season, he was ready to do one show approximately every six weeks. In the third season (1952–1953), the show was broadcast every four weeks. During the 1953-1954 season, The Jack Benny Program aired every three weeks. From 1954-1960, the program aired every other week, rotating with such shows as Private Secretary and Bachelor Father. Beginning in the 1960-1961 season, The Jack Benny Program began airing every week. It is also worth noting that the show moved from CBS to NBC prior to the 1964-65 season. During the 1953-54 season, a handful of episodes were filmed during the summer and the others were live, a schedule which allowed Benny to continue doing his radio show. In the 1953-1954 season, Dennis Day had his own short-lived comedy and variety show on NBC, The Dennis Day Show.

In his unpublished autobiography, I Always Had Shoes (portions of which were later incorporated by Jack's daughter, Joan, into her memoir of her parents, Sunday Nights at Seven), Benny said that he, not NBC, made the decision to end his TV series in 1965. He said that while the ratings were still very good (he cited a figure of some 18,000,000 viewers per week, although he qualified that figure by saying he never believed the ratings services were doing anything more than guessing, no matter what they promised), advertisers [the alternate sponsors during his final season in 1964-65 were State Farm Insurance and Miles Laboratories (Alka-Seltzer, One-a-Day) were complaining that commercial time on his show was costing nearly twice as much as what they paid for most other shows, and he had grown tired of what was called the "rat race." Thus, after some three decades on radio and television in a weekly program, Jack Benny went out on top.

In Jim Bishop's book A Day in the Life of President Kennedy, John F. Kennedy said that he was too busy to watch most television but that he made the time to watch The Jack Benny Program each week.[6]

Four classic episodes of the show ran on CBS during the summer of 1991. Reruns also appear on PBS stations.

The series has yet to receive an "official" DVD release, however public domain episodes have been available on budget DVDs (and VHS) for years. In 2008 25 public domain episodes of the show that were thought to be lost were located in the CBS vault. To date, CBS has refused to digitally preserve or release the shows, despite the support of Jack Benny's estate and a funding offer by the Jack Benny Fan Club.[7]

Whether on television or radio, the format of the Jack Benny Program never wavered. The program utilized a loose show-within-a-show format, wherein the main characters were playing versions of themselves. There was not really a fourth wall, per se. The show would usually open with a song by the orchestra or banter between Benny and Don Wilson. There would then be banter between Benny and the regulars about the news of the day or about one of running jokes on the program, such as Benny's age, Day's stupidity or Mary's letters from her mother. There would then be a song by the tenor followed by situation comedy involving an event of the week, a mini-play, or a satire of a current movie.[1]

Although Eddie Anderson's Rochester may be considered a stereotype by some, his attitudes were unusually sardonic for such a role, and Benny treats him as an equal, not as a servant. In many routines, Rochester gets the better of Benny, often pricking his boss' ego, or simply outwitting him. The show's portrayal of black characters could be seen as advanced for its time; in a 1956 episode, African-American actor Roy Glenn plays a friend of Rochester, and he is portrayed as a well-educated, articulate man[8] not as the typical "darkie stereotype" seen in many films of the time. Glenn's role was a recurring one on the series, where he was often portrayed as having to support two people on one unemployment check (i.e., himself and Rochester).