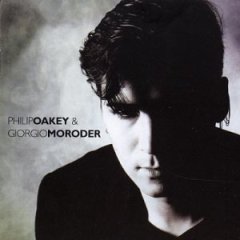 "Philip Oakey & Giorgio Moroder" was a collaborative album released in 1984 by , lead singer of the electronic band and seminal electro producer , whose early records had been a major influence on Oakey.

The album is most notable for containing the song "", which was the title track for the movie "Electric Dreams" and a major hit single. In fact, the album was essentially a spin-off project set up by Virgin records to capitalise on the success of the single.

The album consists mainly of sequenced beats, along with dinstinctly FM-generated bell-like sounds, and a number of sounds generated by analog synthesizers. Interestingly enough, this album uses very little sampling. Notable, also, is that the first five songs on this album (the entire first side on the original vinyl LP version) are seguéd together.

In two further singles were released from the album. In July 1985 "" was released with a big budget but only reached number 44 in the singles chart. This was followed up in August 1985 with "" which reached only number 74. The lack of success of the singles effectively put an end to the brief Oakey/Moroder partnership. After recording this album, Philip Oakey returned to work on the next Human League album, "Crash" in early 1986.

The Human League regularly perform "Together in Electric Dreams" at their live concerts, usually with Philip Oakey giving named credit to Giorgio Moroder.

In 2003, in an interview by included on the , Oakey was asked to comment on the experience of working with his idol Moroder on this project. He diplomatically characterises him as a "very quick worker", claiming they made the entire album in a few days. [Kolling, Niels [http://www.the-black-hit-of-space.dk/menu.html] ]